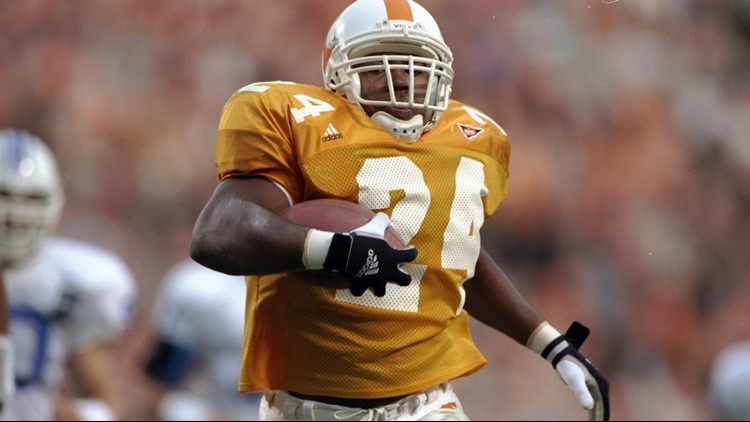 21 Nov 1998: Running back Shawn Bryson #24 of the Tennessee Volunteers in action during a game against the Kentucky Wildcats at Neyland Stadium in Knoxville, Tennessee. Tennessee defeated Kentucky 59-21. Mandatory Credit: Allsport/Allsport

1998 National Champions: Seniors go out in style against Kentucky

There were not a lack of storylines in Neyland Stadium on November 21 against Kentucky, both celebratory and tragic.

We'll start on the field. Even though the Vols sat at 9-0, the No. 1 team in the nation, UT had yet to clinch its division and a spot in the SEC Title game. Florida was one game back, with its only loss so far coming against the Vols in overtime earlier that year. With a win against Kentucky, Tennessee would clinch a SEC East Division title.

It was also senior day with many big names set to be celebrated. Players like Al Wilson, Jeff Hall, Shawn Bryson, Peerless Price, Jermaine Copeland and Corey Terry. A class that, when it was all said and done, brought Tennessee two SEC Championships and one National Title.

"My last time running through the T was kind of sad," said kicker Jeff Hall, "but I'm glad it ended the way it did."

Two legendary broadcasters were set to hang up the mic at the end of the season as well: John Ward and Bill Anderson. A few short sentences do not do justice to the impact the pair had on Tennessee fans everywhere.

There was also a cloud of melancholy hanging over Neyland. The Sunday before, a truck driven by starting Kentucky center Jason Watts veered off a rural highway, rolling over throwing Watts, Christopher Scott Brock and Arthur Steinmetz from the vehicle. Steinmetz, a 19-year-old Michigan State transfer, and Brock, a childhood friend of starting quarterback Tim Couch, died in the accident. Watts was charged with second degree manslaughter as well as drunken driving. A long and emotional week ended too quickly, with the Wildcats turning now to the biggest challenge of the season: a road game against Tennessee, a rival and the No. 1 team in the country.

The game started off well for the Vols, with a failed fake punt and another poor kick, Tennessee started its first two possessions in Wildcat territory, adding, two Hall field goals, leading 6-0 early.

Couch, a Heisman candidate, drove the Wildcats down the field, throwing a touchdown pass to Lance Mickelson with a little more than five minutes left in the first quarter. The Wildcats led the No. 1 team in the country 7-6.

From that point on, it was all Tennessee.

UT drove down the field, with fullback Shawn Bryson capitalizing on a short 3rd and goal touchdown and adding two more points in the air with a catch from quarterback Tee Martin.

Martin continued to impress with his arm throughout the game, hitting wide receiver Cedrick Wilson 55 yards down the field on a 3rd and 21 to take a 21-7 lead less than three minutes into the second quarter.

The next Tennessee possession, Bryson kept up a fantastic game, showing the speed that made him a running back early on at Tennessee, ripping off a 58-yard touchdown run on a fullback dive. Add on another Hall field goal and a Phil Crosby touchdown run and the Vols led 38-7 going into halftime. UT ripped off 32-unanswered points after trailing 7-6 in the first quarter.

Another note, on his senior day, with the final PAT of the game for the Vols, Jeff Hall became the all-time leading scorer in SEC history. The record stood for five years. Hall now sits at fifth in career scoring in the Southeastern Conference.

One more game to go and the only team standing between Tennessee and an undefeated regular season? A two-win Vanderbilt squad in Nashville.