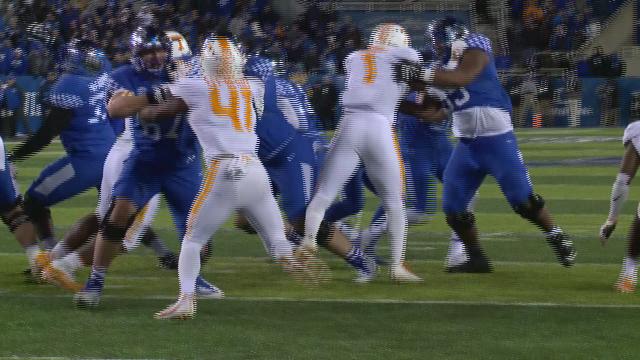 UPDATE, Sunday 8:55 p.m. : Coach Butch Jones will have his regularly scheduled news conference Monday at noon, per a UT release.

Butch Jones is scheduled to have his regular press conference tomorrow at noon. Ditto Wednesday. #Vols

The report came after the Vols' 29-26 loss at the hands of the Kentucky Wildcats on Saturday. Griffith reported before the game Jones would likely have to win out the rest of the season to keep his job.

Jones said he believed he "absolutely" still had the support of Athletic Director John Currie and the UT administration in his post-game news conference.

"I coach for my job every single day," Jones said. "That hasn't changed since the minute I walked in here in Year One. That's always a mindset I've had."

A well-placed source told me UT has not called a press conference for today or this week regarding UT coach Butch Jones’ status.

While many believe Jones will not survive this season, another source told me Jones will coach the Southern Miss game Saturday.

GoVols247 maintained Coach Jones' departure was not a matter of if, but when:

Not a matter of if. A matter of when. We all know that. And we’re all working on it.

The flurry of reports comes in the wake of Florida's firing of Gators head coach Jim McElwain. McElwain leaves Gainesville after winning back-to-back SEC East Division titles in 2015 and 2016.

10News will update this article with the latest information.