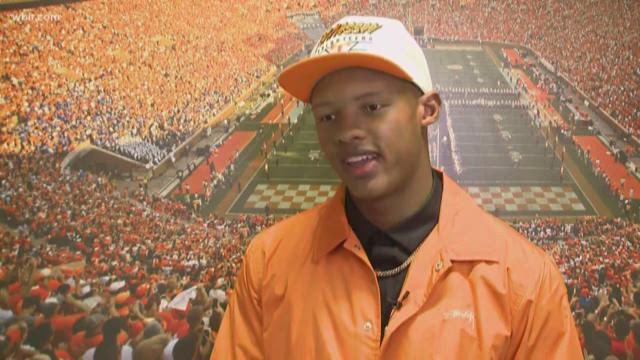 Former Tennessee quarterback Joshua Dobbs took time this fall to think about where his life was headed.

Dobbs talked to 10News about his life after graduation from UT, when he was in town for the Vols’ homecoming win over Southern Mississippi.

The 22-year-old Dobbs' 23 wins as a starting quarterback are tied for fifth most all-time at Tennessee (Condredge Holloway also had 23). He caught the attention of the Pittsburgh Steelers during Tennessee’s pro day last spring. Pittsburgh took Dobbs in the fourth round of April’s NFL Draft.

“So now, your goal is to be the best,” Dobbs said. “To win Super Bowls. To win championships, and win as many as you can in your time in the NFL. So that’s what I’m focused on now.”

Dobbs has found an on-field mentor in quarterback Ben Roethlisberger, an NFL vet with 14 seasons of experience.

“Being able to watch how he goes about practice, how he takes his reps, where he goes on different plays, how he studies the game,” Dobbs said. “I’m able to learn a lot secondhand, just observing. And of course being able to bounce ideas off him in the preseason was a great resource, being able to talk to him during the games.

“He’s obviously a great resource to have,” Dobbs said. “He’s playing really well right now, and I’m very thankful to have that.”

Dobbs has taken a break from his aerospace engineering studies since graduating, save for a flight simulator app he plays on his iPad. He said some of his hobbies include community service and learning pop songs on the piano. He’s learning “No One” by Alicia Keys – a “great song,” in his own words – and is also working on a version of “The World’s Greatest” by R. Kelly.