The Orange & White Game will kick off in Neyland Stadium on April 24. Tickets are not required and gates will open at 2:30 p.m. 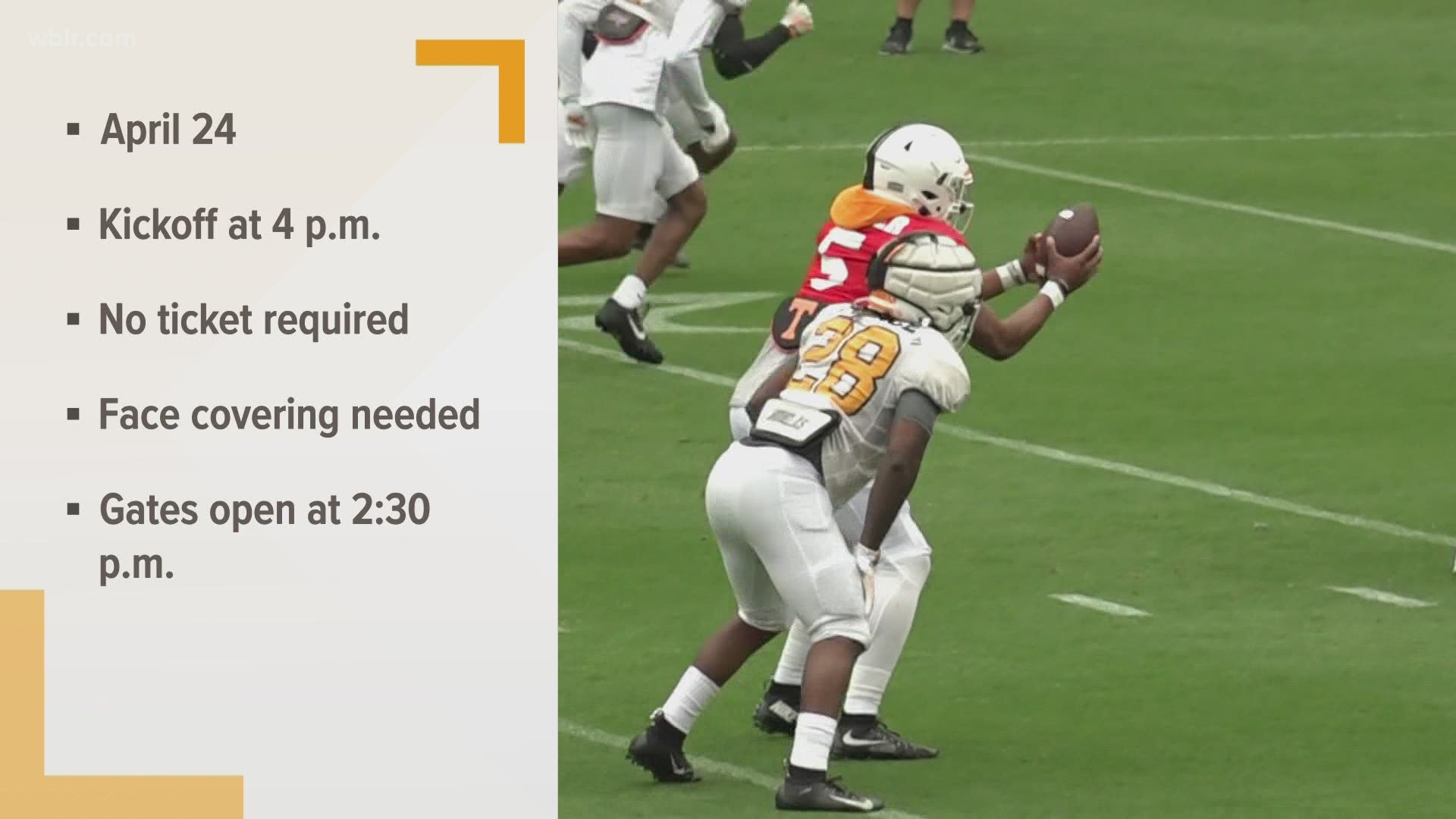 KNOXVILLE, Tenn. — The Orange & White Game is set to return to Neyland Stadium on April 24.

According to a press release, the main bowl of Neyland Stadium will be general admission seating utilizing every other row.

Tickets are not required and gates will open at 2:30 p.m.

Admission details for the Chevrolet Orange & White Game have been announced.

Face coverings will be required at entry and during movement through the stadium.

Normal game day policies will be in effect, including the clear bag policy.

Some road closures will be in effect as well. Beginning at 11 a.m., Phillip Fulmer Way will be closed from Cumberland Avenue to Peyton Manning Pass, officials said.

The family-friendly pregame tailgate at Vol Village will open at 12:30 p.m. in Lot 9 (directly west of Neyland Stadium) and will feature music provided by VFL Sterling Henton, photo opportunities, Smokey, food vendors, giveaways, and other activities.

The full Pride of the Southland Band will be in attendance during the spring game.

The contest will be broadcast live on SEC Network+ and the Vol Radio Network.

Officials said that while admission is free and tickets are not required, fans can RSVP to receive Orange & White Game information and updates as well as a chance to enter to win two 2021 Tennessee football season tickets at UTSports.com/OW.

The events will kick off with softball hosting Georgia at 2 p.m. at Sherri Parker Lee Stadium and first-year Tennessee head coach Josh Heupel and his Volunteers culminate the spring at 4 p.m.

Season tickets are available at AllVols.com. Those with questions related to seats, views, and options can use the live "CHAT" feature on AllVols.com.

Those interested in season tickets can schedule an appointment time to speak with a representative on the day of the spring game here.

Tennessee opens the 2021 campaign against Bowling Green on September 4 in Neyland Stadium.

The Vols and the SEC return to a 12-game regular-season slate following a unique 2020 campaign that included 10 conference-only contests due to COVID-19.

The Orange and White game will no longer be played on April 18.

The SEC has suspended all athletic activities through at least April 15.

The status of the game will be determined at a later date.

Get ready for some football!

The Vols ended the 2019 season on a six-game winning streak and a victory in the TaxSlayer Gator Bowl over Indiana, so fans are pretty excited for the boys in orange to take the field!

Tennessee's spring football practice will culminate as always with the Orange and White Game on April 18 at 4 p.m. in Neyland Stadium

The event pits the Vols against each other in a scrimmage match and other drills to show off the team's skills. It offers fans a glimpse into what the next season can hold.

Parking is free for the Orange and White game. Vol Village will open at noon in Lot 9 and Neyland Stadium gates will open at 2:30 p.m.

Alcohol sales will be available in Neyland Stadium.

The game will be televised on the SEC Network+ via WatchESPN.com and the ESPN App. It will also be carried on affiliates of the Vol Network with pre-game air time at 3:45 p.m.