Jamie Beckler's dad was a huge Vols fan. When he died, Beckler knew he had to bring a little bit of Neyland to his dad's grave before the Alabama game. 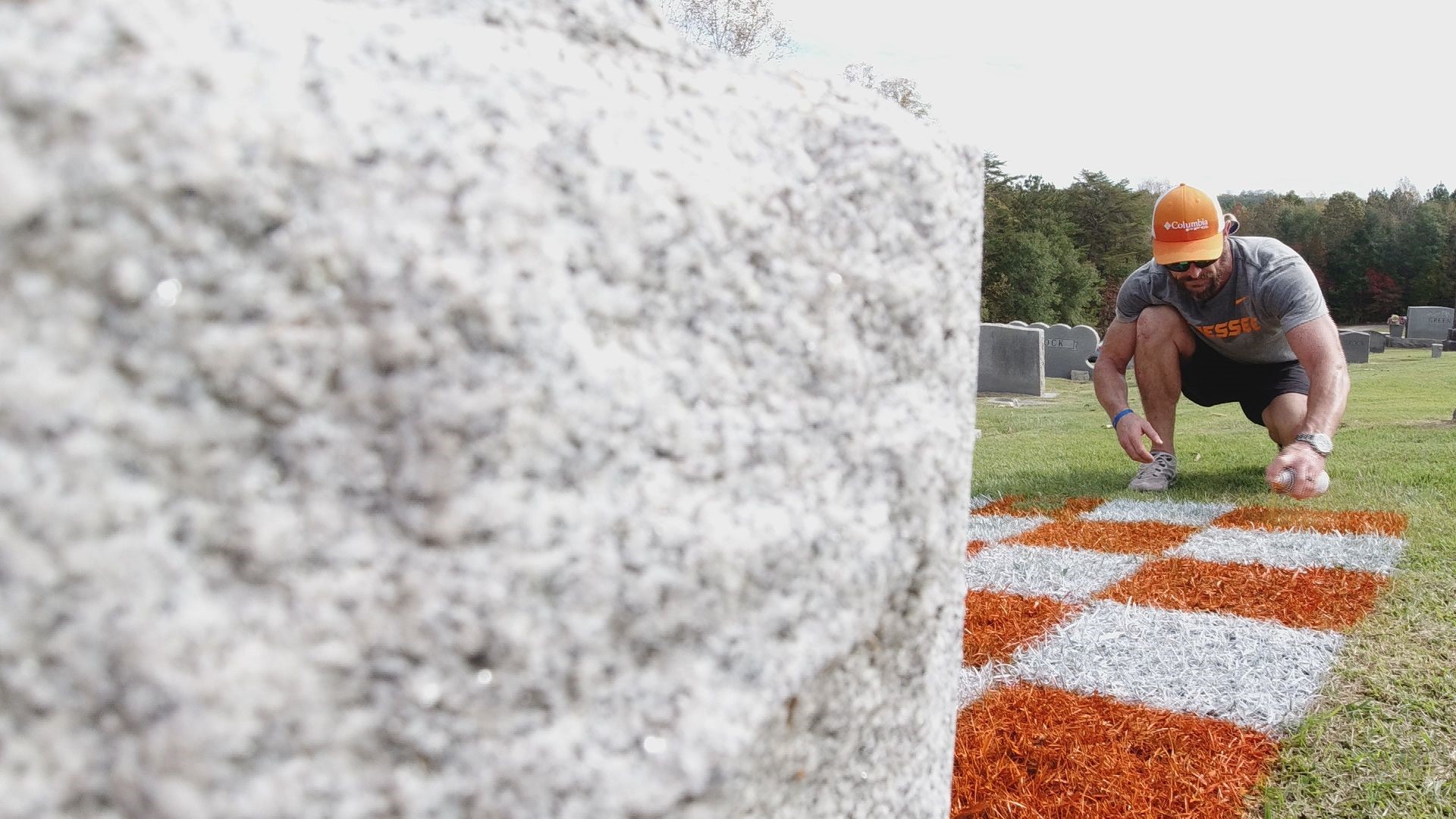 POLK COUNTY, Tenn. — A Cleveland man honored his late father by spraypainting a Tennessee Vols checkerboard over his gravesite.

The famous orange-and-white checkerboard is a symbol of the volunteer tradition in Neyland Stadium. And before the UT vs. Alabama game each year, Jamie Beckler ensures his dad has a little piece of the end zone.

For Beckler, orange-and-white is more than a way of life.

"Vol 'til I fall," Beckler said. "You cut us and we bleed orange, and we live by that."

Every year before Tennessee faces Alabama, he makes sure his dad is ready for the big day with spraypaint.

"Good ol' orange and white checkerboard," Beckler said. "My dad would, I mean, he's smiling down right now. He would have loved it."

Beckler's dad Rickey passed away in 2008 from pancreatic cancer. Now, he's buried in a small cemetery in Polk County.

"He was a good man and a great father," Beckler said. "He was fun-loving and was the life of the party. He was the glue that held a lot of us together too.”

He was a huge Vols fan and raised Jamie the same way. When he passed, Jamie and his uncle knew they needed to honor him at his final resting place.

They saw someone online paint a relative's grave before game day, and that gave them the idea to paint the checkerboard in the cemetery.

"Sharing that joy and actually getting to be a father myself, I wish he was here to see me doing it, and I hope he's proud of the way I'm doing it," Beckler said.

He has been doing this for years, using handmade 12-inch boxes. He used to use a single box to paint each square, but this year made a row four boxes long.

He gets his hands on the closest thing he can find to the true Vol orange, PMS-151, and finds a glossy white to go along with it.

He paints a section of the Neyland end zone right in front of his dad's headstone, praying for some help for the Vols from heaven.

"Dad, if you can, help us out some up there," Beckler said.

Until they meet again, Jamie will paint his father's plot orange and white, bringing a new meaning to "Vol for life."

"God, family, and Tennessee football. That's what it's all about pretty much," Beckler said.

Beckler does ask permission from the cemetery before painting the grass. He encourages others to do the same for their loved ones.

In 2016, Beckler's posts about his dad's checkerboard gravesite went viral online. He said he never expected that to happen, but is grateful the message could get out to all of Vol nation.