The Tennessee basketball left school early for the NBA, but finished his degree during his rookie season. He surprised his mom with the news on Mother's Day. 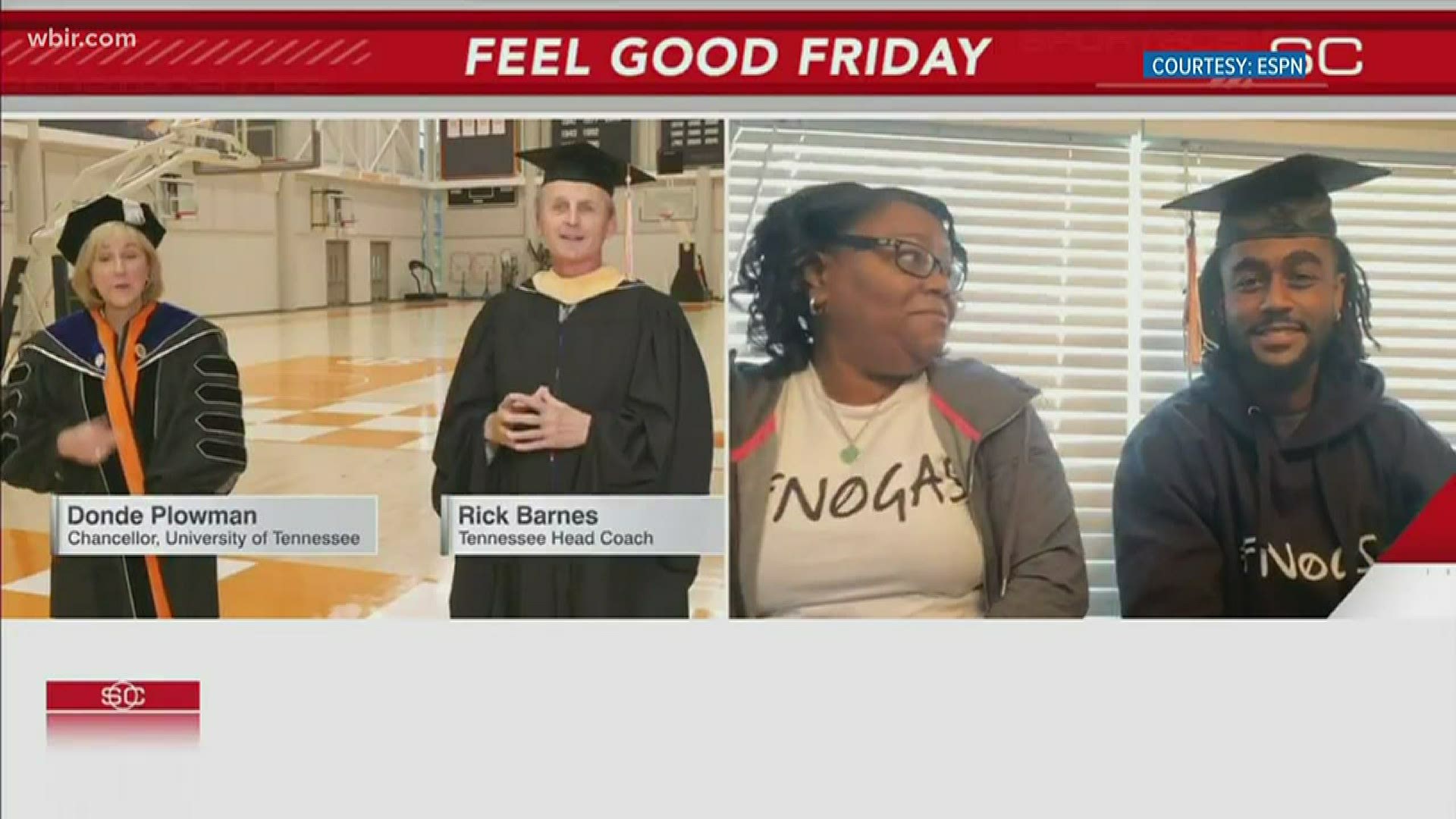 A Tennessee basketball star who left college early for the NBA is now officially a graduate of the university.

Jordan Bone had a breakout junior season on Rocky Top for the men's basketball team, so good that he knew he had a chance to get drafted into the NBA.

He did. He just completed his rookie season with the Detroit Pistons, but it wasn't just basketball on his mind.

While he was learning how to play basketball at the elite level, Bone was quietly completing his course work to get his degree at UT.

He didn't tell anyone, even the mother who had instilled in her family the importance of getting an education and that you always finish what you started.

Bone gave her the ultimate gift on Mother's Day--- that he was graduating from the University of Tennessee!

"After the draft, I told her I would complete my degree," Bone said in an appearance on ESPN Friday with his mom, Karen, at his side.

Bone knew education was important in his family, but as he worked hard and his skills improved on the basketball court, he knew he could realize that NBA dream.

But why couldn't he have both?

"Had to get that degree, man," he said. " Just something that was instilled in me as a child. When you go to school, you finish. Whatever you start, you must finish."

So he got the degree, but because of the COVID-19 pandemic, he didn't get to walk across the stage at a traditional ceremony with his mom proudly cheering him on.

ESPN had a little surprise for Bone and his mom.

Working with his older brother, Josh, who was also a basketball star at UT and a graduate, the university sent a gift to be unveiled during the live interview.

It contained a cap and tassel, which Bone was asked to put on with the tassel hanging on the right, the way it is in traditionally worn until the end of a graduation ceremony.

Bone put the cap on, after some concern and laughs about his hair.

Then, he got a message from Coach Rick Barnes and UTK Chancellor Donde Plowman, both dressed in graduate robes.

"We are all so excited you finished what you started. Thrilled for you. Remember we’re always here for you. You're a Vol For Life. We love you and God bless," Barnes said.

Plowman then made the graduation ceremony complete.

"Karen, the moment you've been waiting for," she first addressed Bone's mom. Then, "Graduate, you may move your tassel from right to left!"

Then both Barnes and Plowman unveiled what they were wearing underneath their robes. Plowman had a Tennessee basketball jersey and Barnes was sporting Pistons' blue and red.

That was followed by some tears from mom and a big hug.

"I know she's so proud of me and my brothers," Bone said. "This is a special moment I will always remember."

The determination to finish what you started is something he plans to pass on to his children, and that he hopes his young fans will also emulate.

"Keep pushing. You can do it, believe in yourself and put in the work," he said was his message to other young people with a dream.