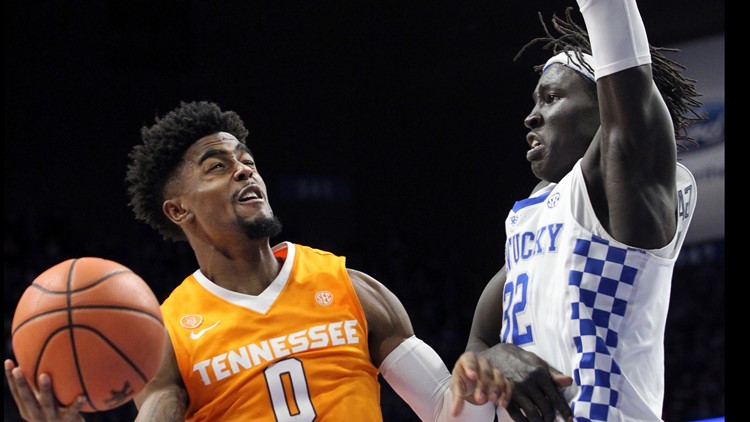 Vols fall from No. 1 to No. 5 after tough loss to Kentucky

KNOXVILLE, Tennessee — After four weeks at No. 1, Tennessee has toppled from the top spot.

After a humbling loss to No. 5 Kentucky on Saturday, the Vols are now No. 5 in the poll. The Wildcats climbed to No. 4.

Duke is the new No. 1 team, followed by Gonzaga and Virginia. The ony other  SEC team in the top 25 is LSU, which jumped from No. 19 to No. 13 after beating Kentucky.

The 86-69 loss in Rupp Arena also snapped a 19-game winning streak by the Vols, and was the team's first confernece loss this season and only the second loss all year.

RELATED: Kentucky ends the Vols' streak in top-5 match up

"We've been telling them for two and a half weeks now that we need to rebound the ball better. We haven't, and there are good enough coaches in this league that see this type of stuff," Vols head coach Rick Barnes said. "We kept telling our guys that sooner or later it's going to bite us, and it bit us. We've been able to get through a couple games where we've been out-rebounded, but we just didn't make good basketball plays."

RELATED: Tennessee remains at No. 1 in AP poll, ahead of Duke

The Vols season only gets tougher from here. They'll host Vandy on Tuesday at Thompson-Boling Arena, a team that took Grant Williams going 23 for 23 at the free throw line to win in overtime.

Then it's a road trip to Baton Rouge to take on the LSU Tigers, a team that defeated Kentucky last week and is now tied with the Vols at the top of the SEC.

After another road game at Ole Miss, Tennessee will be back at home on March 2 for a rematch with Kentucky.