The Big Orange Defense forced four turnovers and Ty Chandler broke Tennessee’s touchdown-less streak, but it wasn't enough as the Vols dropped their sixth conference game in a row in a 29-26 loss. 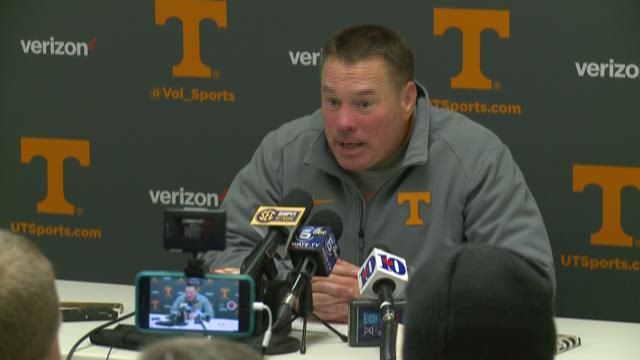 The Big Orange Defense forced four turnovers and Ty Chandler broke Tennessee’s touchdown-less streak, but it wasn't enough as the Vols dropped their sixth conference game in a row in a 29-26 loss.

The game came down to the final play, when redshirt freshman Jarrett Guarantano heaved a Hail Mary pass to wide receiver Jeff George, who caught it inside the ten-yard line, but was immediately tackled to the ground as time expired.

"I've never through this in 30-plus years of how many games have come down to the wire," Jones said after the game Saturday. "You've just got to keep grinding. There's still a lot of football left to be played."

Guarantano finished 18 of his 23 passes for 242 yards, with no touchdowns or interceptions. He was sacked seven times. 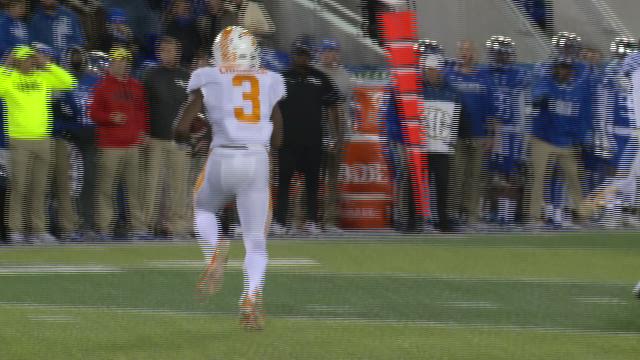 On a positive note, Tennessee’s defense forced four turnovers. Two came in each half.

On the first play from scrimmage, Kentucky’s Benny Snell fumbled due to pressure by Tennessee’s Kendal Vickers, and Nigel Warrior recovered. In the same quarter, Warrior forced the ball out of Kentucky’s Sihiem King, and Shy Tuttle fell on the ball for the Tennessee turnover. Although King was ruled down on contact, video review overturned the play in Tennessee’s favor.

Kentucky quarterback Stephen Johnson left the game briefly due to injury in the third quarter. His backup, Drew Barker, fumbled on his first run of the game. Defensive back Rashaan Gaulden made contact; linebacker Elliott Berry recovered the ball.

Ty Chandler became the first running back to rush for 100+ yards in a game since Jalen Hurd did it in 2014. Chandler finished the game with 120 yards on 22 carries.

A first quarter touchback resulted in a skirmish between the Vols and the Wildcats. The officials responded by giving each player from every team unsportsmanlike conduct penalties.

Linebacker Daniel Bituli was flagged for unsportsmanlike conduct later in the second quarter, and was subsequently ejected.

Rashaan Gaulden also exited the game due to an unsportsmanlike conduct penalty in the waning minutes of the game.

Tennessee entered the game without some of its most key personnel. Running back John Kelly served a one-game suspension for a marijuana possession citation; offensive lineman Jack Jones retired due to recurring injuries; Offensive lineman Marcus Tatum did not make the trip due to injury; Quinten Dormady has a shoulder injury that will require season-ending surgery.

Coach Jones said he feels like he "absolutely" has the support of Tennessee Athletic Director John Currie and administration moving forward, and hasn't felt any added pressure as the losses mount for UT.

"No, I coach for my job every single day," Jones said. "That hasn't changed since the minute I walked in here in Year One. That's always a mindset I've had."

The Vols will host Southern Mississippi next Saturday for their homecoming game. Kick off is set for 7:30 p.m. ET.