Tennessee hasn’t taken the field since a 24-13 loss to Arkansas on Nov. 7, thanks to No. 5 Texas A&M’s own problems with the coronavirus. 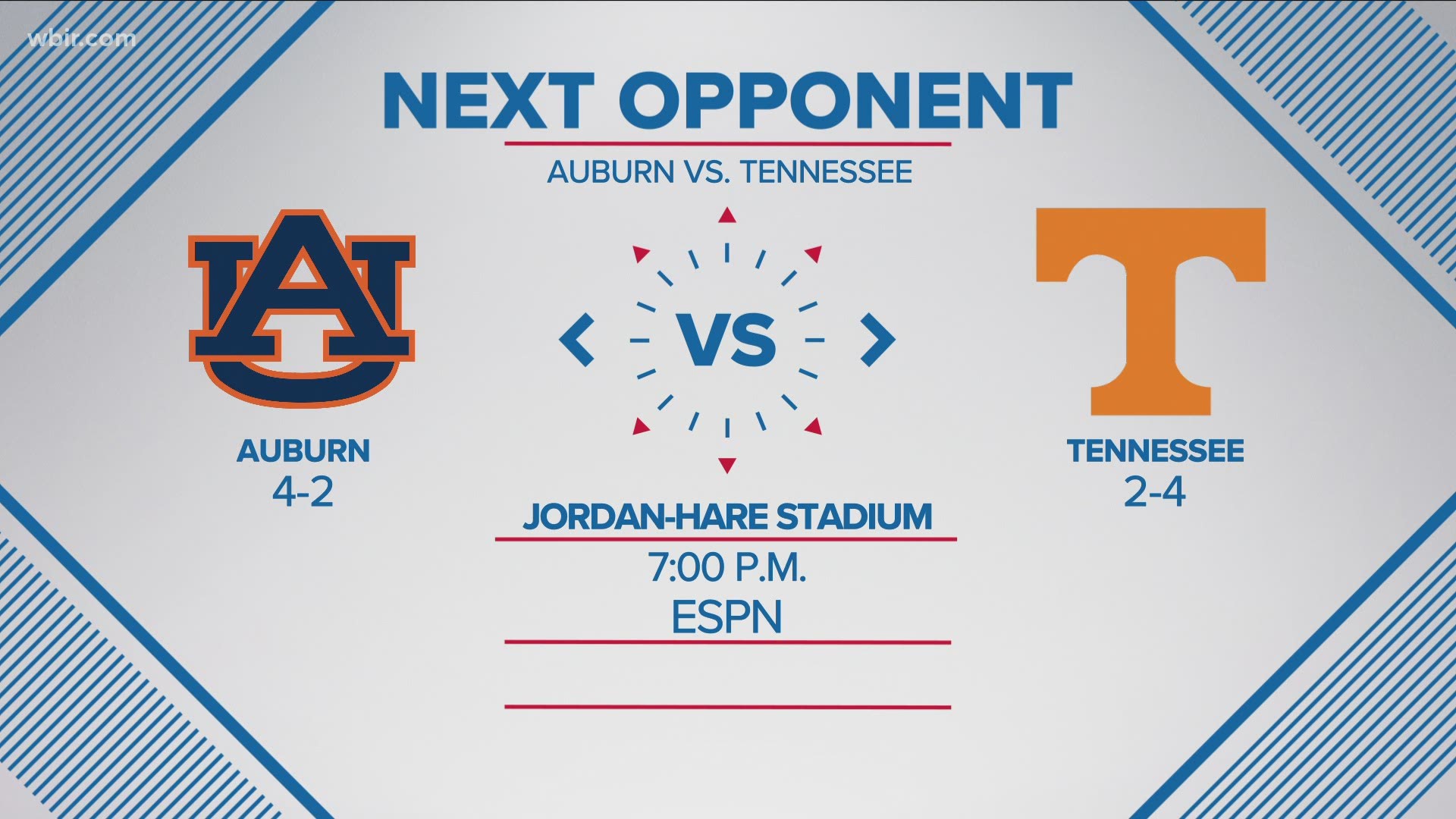 AUBURN, Ala. — The Auburn Tigers were coming off their best performance when last weekend’s game was shut down, and Tennessee suffered the same fate while desperately trying to snap out of a losing funk.

The 23rd-ranked Tigers (4-2 Southeastern Conference) will retake the field Saturday night after a three-week hiatus when the Volunteers (2-4) visit Jordan-Hare Stadium.

It’s a game between two teams who had been headed in opposite directions before COVID-19 disruptions hit the league. Auburn’s 48-11 thrashing of LSU on Oct. 31 seems a distant memory since Mississippi State’s COVID-19 issues pushed back that game after a scheduled open date.

Tennessee hasn’t taken the field since a 24-13 loss to Arkansas on Nov. 7, thanks to No. 5 Texas A&M’s own problems with the virus.

Tigers coach Gus Malzahn is hoping the fact that his team has already played six games will mitigate some of the effects of that layoff.

“But we’ll just have to wait and see,” Malzahn said.

Added Tennessee coach Jeremy Pruitt: “It seems like it’s been forever since we’ve played, and I know that’s probably the case for everybody.”

It has turned into a big game for both teams. The Volunteers scored 66 points in winning their first two games and a collective 61 during the four-game skid.

They’ll try to salvage the season through a schedule that includes challenging dates with No. 6 Florida and No. 5 Texas A&M after visits to Auburn and Vanderbilt.

The Tigers appear to have turned things around after an upset loss to South Carolina but have their own treacherous remaining path. They still have a visit to No. 1 Alabama and a home game with the Aggies.

Pruitt isn’t tipping his hand on who will start at quarterback after Jarrett Guarantano went down with an apparent head injury against Arkansas. Guarantano has had two weeks to recover. Harrison Bailey was intercepted twice by the Razorbacks and Brian Maurer also played but didn’t complete a pass.

“I’m going to wait and let that show itself on Saturday,” Pruitt said. “With Jarrett going down the last game, obviously being out, we worked a lot of guys. And I don’t think it does us an advantage to tell Auburn who we’re going to play at quarterback.”

Behind the emergence of freshman Tank Bigsby, Auburn has put together four straight games with 200-plus rushing yards. No other SEC team has done that this season.

“I really think it was our offensive line coming together,” Malzahn said. “We played musical chairs there during fall camp and the first couple of games because of different issues, either injuries or COVID.”

The Vols are trying to avoid their longest losing skid since the start of the 1989 season. That’s when Tennessee lost the first six games that season with four of those to SEC teams, including Auburn. Tennessee won’t have a game at Neyland Stadium in November for the first time since 1891 to help snap this skid after the Vols’ game with Texas A&M was postponed until Dec. 12.

Tennessee led Arkansas 13-0 at halftime only to give up 24 points in the third quarter. The Vols also led 21-17 at Georgia before being routed 44-21 in that game, which started their current four-game skid. Pruitt used the extra practice time to work the quarterbacks and freshmen wide receivers.

This will be Malzahn’s 100th game as Auburn’s coach. The Tigers are 9-1 after an open date during the regular season during his tenure.