As football season looms, data gives glimpse into what COVID-19 looks like across the SEC

10News took a look at the data provided by each of the fourteen SEC schools to get a glimpse into how the pandemic is unfolding across a conference prepping to play. 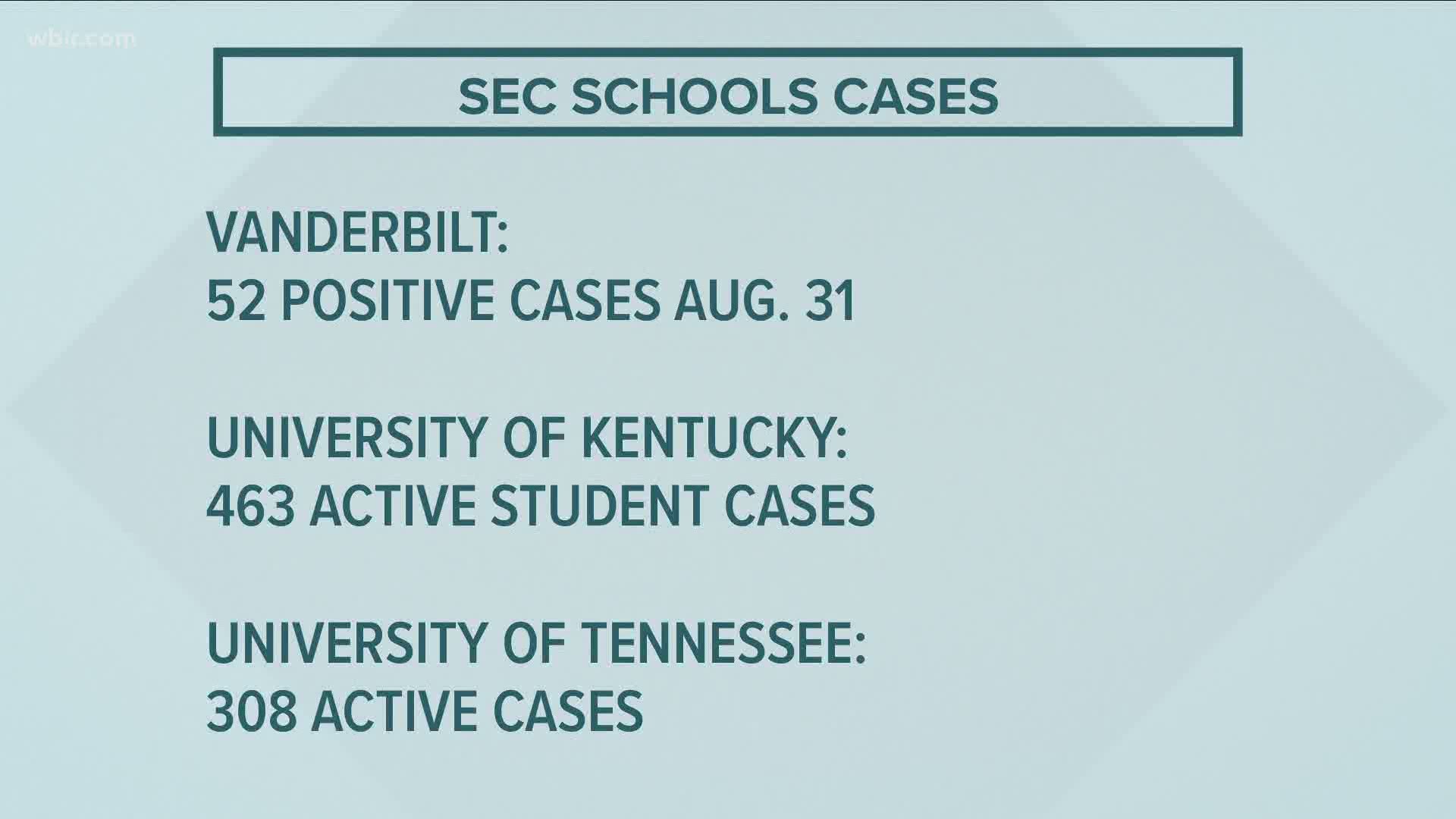 TENNESSEE, USA — As the SEC prepares to hold football season under specialized opening plans, students and faculty at institutions across all 14 member schools continue getting sick from COVID-19.

In recent weeks, universities across the SEC have also been releasing data related to the COVID-19 situation on campus.

The data, much like the SEC conference itself, is not a monolith.

Some reports, like the University of Kentucky's, include the number of active cases on campus. Other universities do not.

The University of Arkansas reports cumulative weekly new cases and also breaks those down by self-reported and tested positive cases, while LSU only reports weekly "positive" cases.

Regardless of differences in presentation, the data provided by the universities show cases of the coronavirus continue to rise even as officials are make plans to reopen stadiums like Neyland this fall.

Here's a brief breakdown of the numbers each SEC school has released so far.

The University of Alabama

That system includes three campuses in Tuscaloosa, Birmingham, and Huntsville.

At the main Tuscaloosa campus specifically, the reported number of total COVID-19 cases among students is 1,201.

Additionally, the university reports there are a total 1,043 cases among staff and faculty within the entire University of Alabama System.

At the main Tuscaloosa campus, there are a reported 166 cases of COVID-19 among staff and faculty.  A majority of the system-wide reported cases come from UAB Clinical Enterprise employees, with 777 COVID-19 cases within that group.

36.09% of the isolation spaces at The University of Alabama in Tuscaloosa are currently occupied.

1.04% of UA students at Tuscaloosa tested positive for COVID-19 during Student Entry Testing

Results from Auburn University’s COVID-19 student reentry testing, which began weeks ago and ended August 21, show there was a 4 percent positive rate of the disease among students as they returned for classes, according to a report published by the university.

Auburn University has also reported a cumulative total of 1,043 cases of COVID-19 on the main campus since March 16, 2020.

According to data released by the university, that includes 498 new cases for the week of August 22 to August 28 on Auburn's main campus.

490 of those new cases were students, 8 were faculty.

A note about Auburn's data set; these numbers only represent individuals who self-reported positive test results to Auburn University.

The data released by the university also does not include results from a re-entry testing program, but Auburn said this will be added when they get results back.

The data also does not include self-reported positive test results from students who tested positive for the virus, but were away from the Auburn campus during summer.

The University of Arkansas is currently reporting 399 active cases of COVID-19.

Since August 10, there have been 35 recoveries. A total of 2,035 students have been tested.

The university reports there is a 3.9% positive rate among students.

The University of Arkansas also releases information on new weekly reported cases, and have released that data since August 31, 2020.

The most recent update of new cases, which the school released on September 1, said the university saw 185 new positive cases in students.

Of that most recent 185 total number of new cases, most cases are self reported as opposed to positive - 151 reported new cases were self-reported, 32 were the result of on-campus testing initiatives. 2 were reported within that group from the Arkansas Department of Health.

The university reports 470 tests were distributed within that time frame.

The new cases data set includes results from university-affiliated testing, self-reported positive cases, and any additional positive reports from the Arkansas Department of Health involving individuals who may have been tested on campus in the summer.

*Click here for what else this data set includes.

The University of Florida breaks down their COVID-19 data by students and faculty, and also testing location.

Among UF students who were tested at the Health Care Center, 1,095 students were tested who did not have symptoms,and 203 students tested positive.

Fifty of those students tested positive, but did not have symptoms. Of that group, that number represents a 0.44% positive percentage.

UF also releases contact tracing results, which you can take a look at here.

These numbers were last updated on September 3, 2020.

A week after classes began at The University of Georgia, schools officials said nearly 800 students and faculty tested positive for COVID-19.

In addition to 798 students, 19 staff and four faculty members reported having COVID-19 through the university’s “DawgCheck” reporting system between August 24 to 30.

For the week of August 24 to August 28, the university conducted 1,810 total tests, of which 97 were positive.

That represents a jump from the previous week, in which 32 of 1,364 came back positive for COVID-19.

"We have a Labor Day holiday coming up," said UGA professor Dr. David Bradford. "That is the optimal time to undertake the difficult pivot to online education. But we need to do that immediately."

UGA also has the third-highest total among U.S. colleges, according to a report Wednesday by the New York Times.

The University of Kentucky is continuing to see spikes of COVID-19 across campus.

There are 78 students in isolation on campus; 53 are in campus isolation facilities, 25 are in fraternity and sorority life isolation.

The information below includes positive tests that have been reported to LSU through the TIGER Check Daily Symptom Checker, according to the university.

Additionally, the indicated time frame reflects when a positive case was reported, not when the virus was contracted.

These numbers include members of the entire LSU Community of nearly 40,000 students, faculty and staff. The number includes persons that were not on campus at any time in the period they contracted the virus.

The University of Missouri is reporting 516 active cases of COVID-19, or 1.7% of the student body.

246 students have recovered from the virus.

Among staff and faculty, the university is reporting 38 cumulative positive cases. 8 people have recovered.

33 total people are currently in isolation, 49 people are in quarantine.

Additionally, Ole Miss reports there have been 201 new confirmed cases of COVID-19, which increased the university's total case county by 63.4%.

The current number of total active cases at the University of South Carolina is 1,017 students and 9 employees.

The university is reporting a total positive rate of 10.2% for students and faculty.

UT's report Wednesday -- reflecting the latest numbers as of Tuesday night -- shows a jump in active, positive cases -- from 198 to 243. Of that, 238 are students and 5 are employees. There's been no change in the number of employees with a positive, active case.

Two new clusters also are being reported at sororities.

According to the Wednesday report for Tuesday, a total of 1,253 people were in isolation or quarantine, including 632 students living off campus and 557 students living on campus. The employee count remains at 64.

The total isolation/quarantine number rose from the day before when there were 1,045 people, including 558 off-campus students and 423 on-campus students.

New clusters also are being reported at two sororities -- Phi Mu and Sigma Kappa. That brings to five the total number of virus clusters that have been verified at sororities at UT.

There have been 230 recoveries.

Between August 24 and August 31, Vanderbilt University is reporting a positivity rate of 1.27%.

Vanderbilt said that meant 52 of total 4,101 "resulted tests" were positive.

Previously, between August 17 and 23, the university reported a 1.16% positivity rate.

Texas A&M reports the overall testing positivity rate at the university is 11.4%, while the negative rate is 88.6%.

There have been 56 deaths in Brazos County, where Texas A&M is located, since the start of the pandemic.