What Jeremy Pruitt talked about during Monday's press conference

Praise for seniors, updates on players absent from the South Carolina game and why he views the Vols as 1-9. 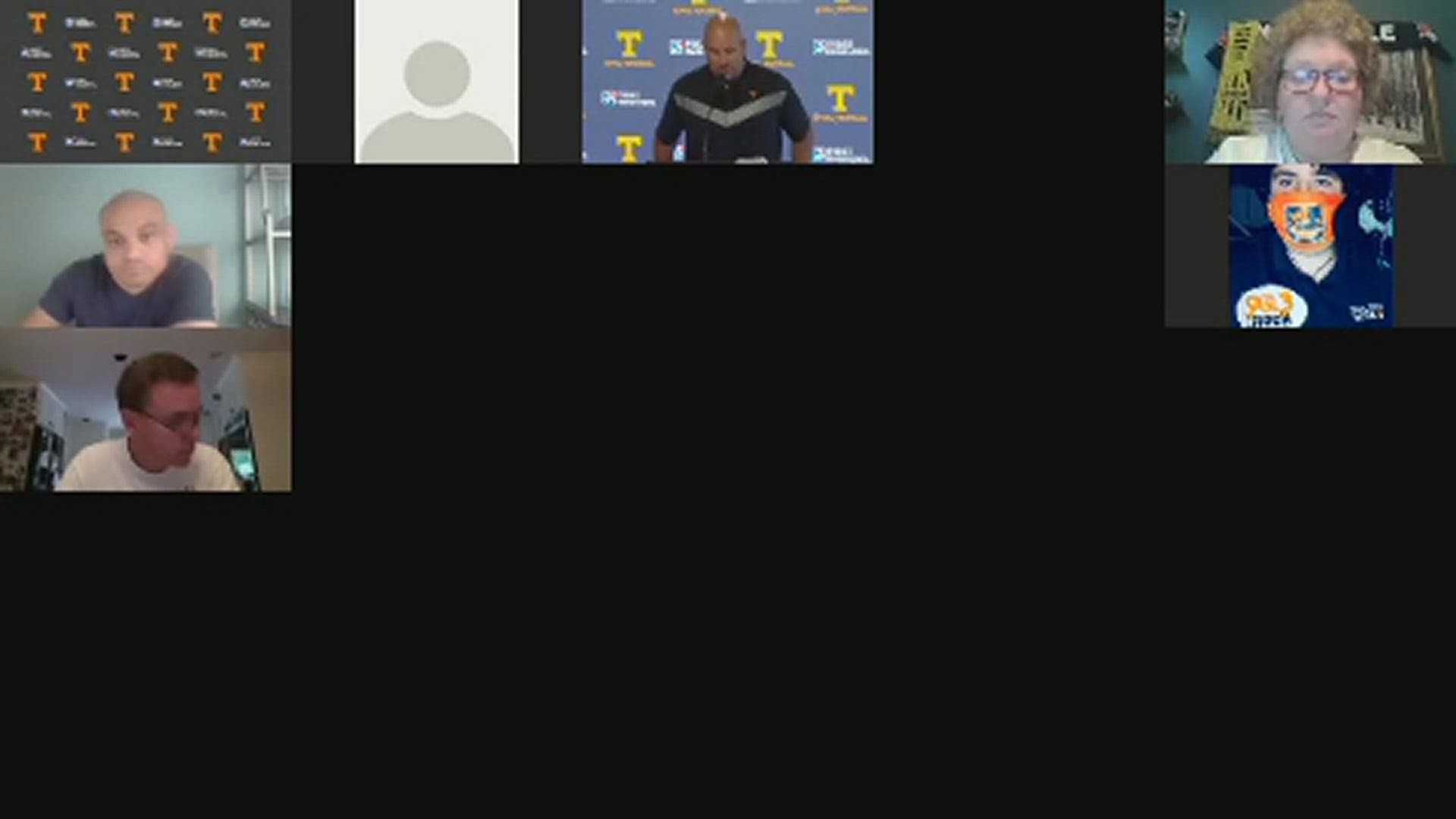 KNOXVILLE, Tenn — Tennessee is sitting at 1-0 after one week in this makeshift all-conference schedule for the 2020 football season. After having more than 24 hours to watch film and assess his team's play, head coach Jeremy Pruitt spoke with the media on Monday afternoon via videoconference. There was talk of players making the most of their opportunities, of mistakes made and of the hope of building momentum for the remainder of the season. Here's what Jeremy Pruitt said as the Vols prepare to take on Missouri at noon on Saturday in Neyland Stadium.

An update on Darel Middleton and Shawn Shamburger

Tennessee was without two of its senior contributors on Saturday, with defensive lineman Darel Middleton and defensive back Shawn Shamburger being late scratches against the Gamecocks. In a tweet sent Saturday afternoon, Middleton said because of, "health issues" he wouldn't be able to play against South Carolina. He later tweeted on Sunday that he was, "back in the mix."

Due to health issues. I want be playing today. But back next week after a couple check ups. Ready to go. Im on the edge of my seat tonight! 🍊

Pruitt didn't provide a reason on their absence, besides affirming the team's stance on revealing COVID-19 diagnoses and contact tracing, as well as mentioning their absence was not for disciplinary reasons.

"We talked about last week from a standpoint of COVID and everything that's going on, I just really don't think it's fair to the players to probably put out exactly why they're not there. Hopefully, if everything works out we can get these guys back very soon," Pruitt said.

Tennessee senior outside linebacker Deandre Johnson played big for the Vols against South Carolina. His six tackles and 2.5 sacks are career-highs. His sack total from Saturday matches his sack total from all 13 games last season. Now, Pruitt said he needs to do it again.

"I think Deandre has had a really good camp, he's one of the guys who has not missed a practice, he's been here everyday and it showed," Pruitt said on Monday. "He's practiced well every day, he's a guy that's been in our system for three years, has some maturity about him, has really worked hard this offseason. He's got to do it week in and week out, we need him to do that."

Moving in the right direction

No one should be surprised to hear that Tennessee had a hard time getting ready for the season. With contact tracing and quarantining preventing many players from practicing much, if at all, as the first week of the season began, there was sure to be mistakes and sloppy play. Pruitt said on Monday, the Vols are moving in the right direction in terms of players available and the product on the field.

Pruitt: I love our players' attitude. They're very coachable. When things didn't go our way, on the sideline they didn't blink. They kept getting coached and tried to find a way #Vols

"Hopefully we can continue this week and create some momentum, create some chemistry in all three phases of our team. From the first game to the second game, lots of times, is when you improve the most and we have lots of areas that we need to improve on."

Brandon Johnson shaking off the rust

After only playing in the first four games and then redshirting the rest of the 2019 season, senior Brandon Johnson played a major role in Saturday's game. He finished second on the team in receiving with three catches for 73 yards including a show stopping one-handed grab in the first quarter. His success doesn't surprise Pruitt, because there's not much Johnson can do to surprise him.

"Brandon's a guy that hadn't missed any reps during camp, he's been at every practice. Guy that has some experience to him, a fifth year guy, has graduated. So you know, it don't surprise me. Brandon can play every position. He's also a good special teams player. You know, he's an instinctive guy. So he's a good leader amongst the group. So anything that Brandon does doesn't surprise me."

Win streak? Never heard of it

After LSU's loss to Mississippi State on Saturday, Tennessee now holds the longest win streak among Power Five conferences: seven games in a row, dating back to Oct. 26, 2019. As you might imagine, that doesn't mean much to Pruitt.

"Last year is over with, it's good that we finished out like we did," Pruitt said.

"We're 1-0 and the way I look at it, I count all the games that you (will) play as losses in my book, so I say right now we're 1-9 until you go earn it and win it. So got a long ways to go. We've got a lot of things we got to work on and we've got a lot of time to do it. This team, their identity, you know how they're going to be remembered, they've got nine weeks to kind of decide that. It'll be up to them. So we got a lot of season left."

Tennessee will play Missouri at noon on Saturday in Neyland Stadium. It'll be the home opener for the Vols.