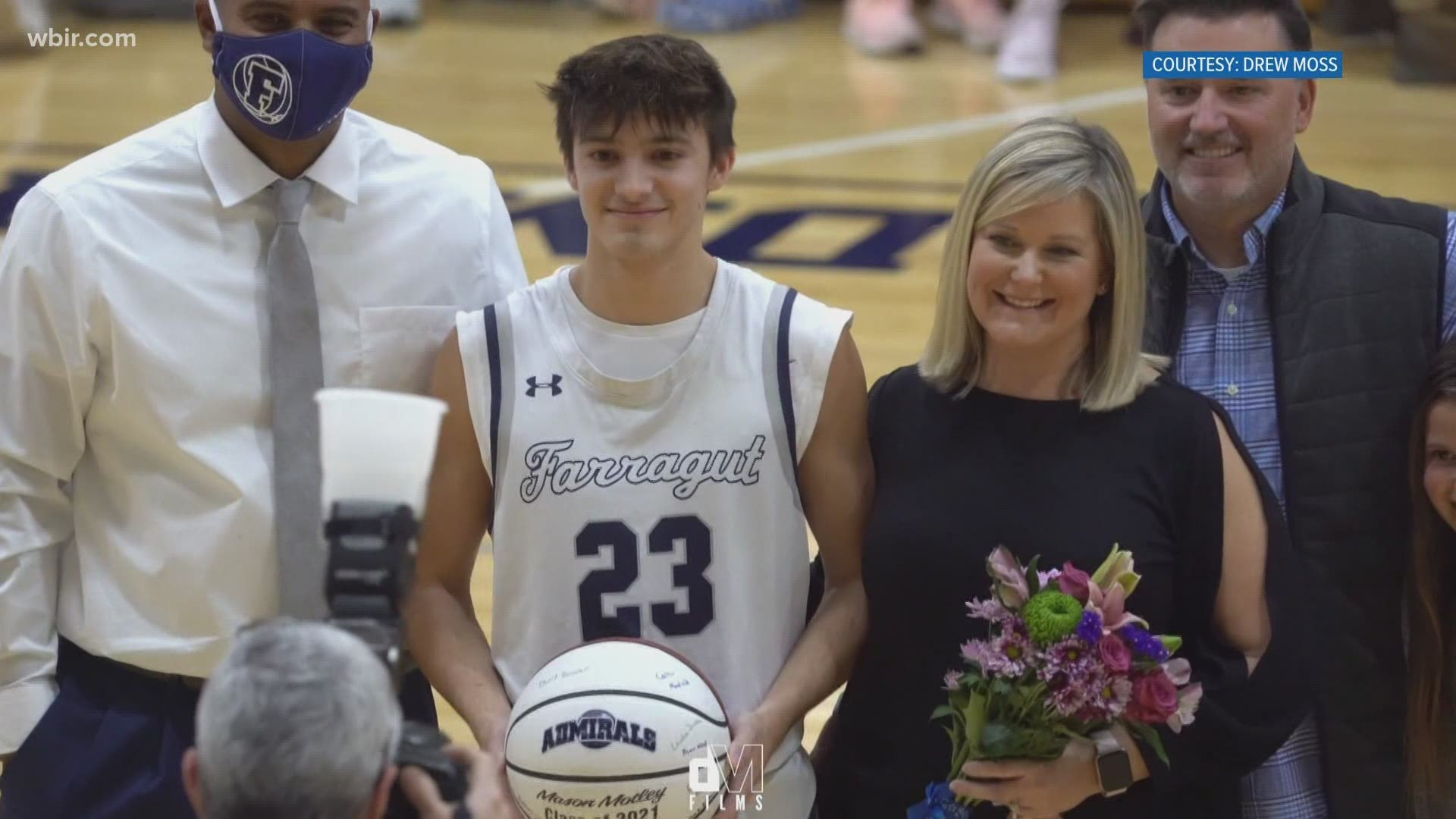 FARRAGUT, Tenn. — For someone who loves basketball as much as Farragut High School senior Mason Motley, getting the start on a senior night in high school was never really up for debate. However, if there's anything Motley has learned over the past four years, it's to expect the unexpected.

"They said they found cancer cells in the biopsy, it was a big shock. I never thought anything like that could ever happen," Motley said.

After doctors found osteosarcoma in his lower left leg, Motley's mind immediately went to the gym. He said that he went straight to practice and told his team afterward. Then, he said they all prayed together.

"It was very difficult for all the kids, someone that we see every day, that we're around every day, being in that position. It's hard," said Farragut boys' basketball head coach Jon Higgins.

Months of treatment led to surgery, which led to crutches for more than a year. He is slowly building strength back up in his leg after so much inactivity.

After spending so much time building strength back up for so long, he'll never forget senior night and his incredible shot.

Pulling up from mid-range. A jumper. Nothing but net.

"You would have thought we hit a buzzer-beater, the way the crowd reacted, but then again, Mason's been an inspiration to everyone at the school," Higgins said.

But thanks to an assist from a former teammate and TikTok, Motley's reach goes well beyond East Tennessee. Bearden senior Drew Moss got a text from Motley's father, asking him to videotape the game. Moss taped the ceremonies, the shot and then got it up on social media in the morning.

"It's a great story, I thought it had the potential to be pretty big. I didn't think it'd be this big," Moss said.

He said that after only 3 hours, the video had more than 1 million views. Now Motley is getting messages from all around the world to thank him for never giving up, and for being an inspiration.

"Just shows the type of strength, the type of character he has. Those things are rare in a kid so young," Higgins said.

"It was a once in a lifetime opportunity, I'm sitting there behind the camera just smiling. It was unbelievable," Moss said.

It was a shot that never would have happened without those closest to him.

"Basketball... even though I haven't been able to play. That's how I made my friends and family. My basketball team, those guys are my family," Motley said with a smile on his face.