'Can You See It?' | 20 years after his death, Oneida's Jim May still inspires community

Oneida High School named its football stadium after a beloved friend, mentor, and coach who died too soon. This is the story of Jim May. 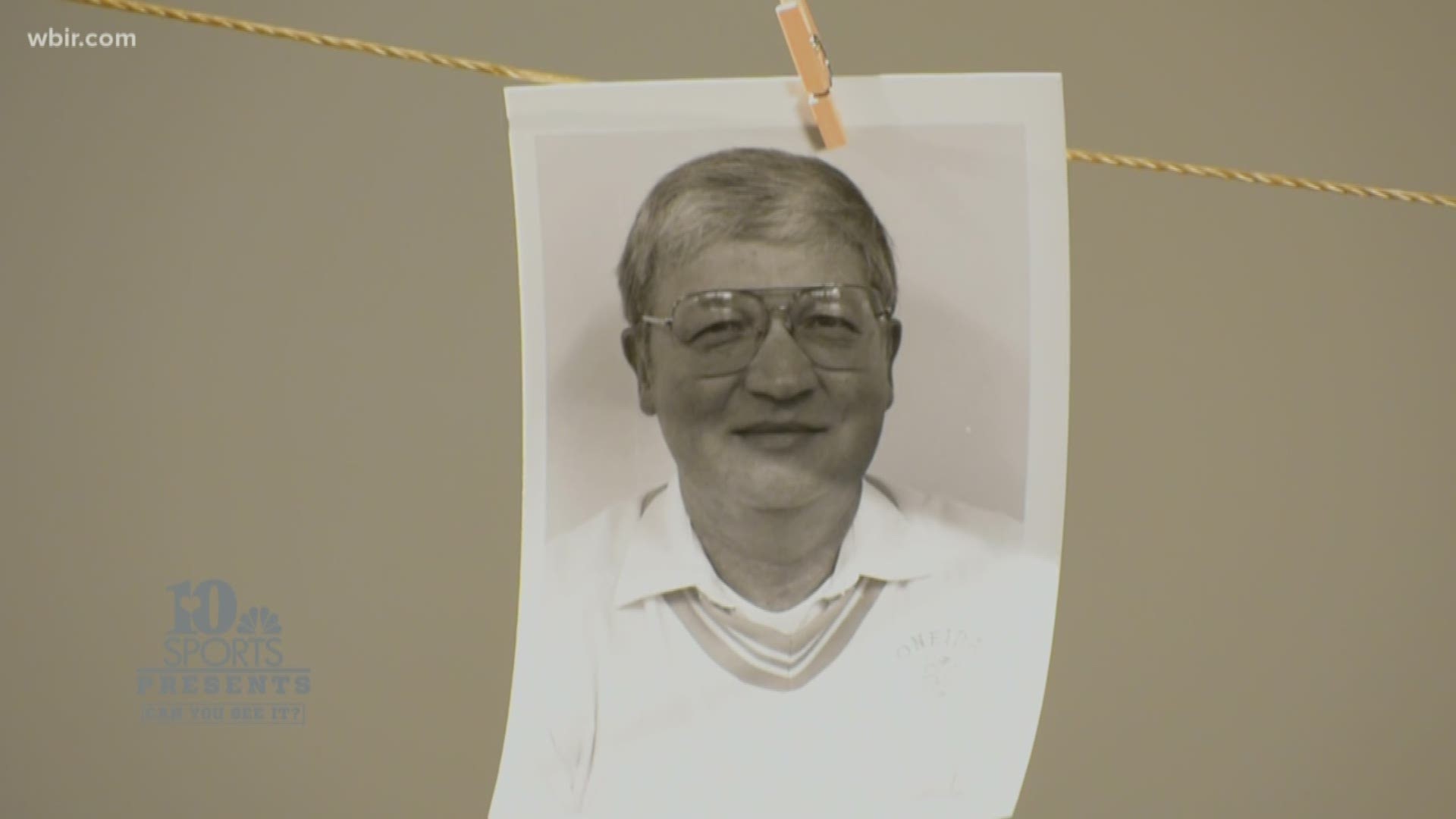 Everyone in Oneida has a Jim May story.

That is, anyone old enough to have known him personally.

May, the late football coach of the Oneida Indians high school football team, touched lives both on the field and off it.

The small town of Oneida has an undying respect and admiration for the man who dedicated his life to the school. Of course, what he did on the football field was extraordinary. He won more football games (140) here than any coach ever, coached longer than any coach ever did at Oneida (1981-1997), and won more championships than any Oneida coach did. Beyond that - the impact he had lasts to this very day. You’ll hear that from anyone in the community.

Pennington, 43, is best known for helping lead the Indians to their 1992 state championship title – the first and only championship in school history. He was an Oneida legacy; his brother played under May, and his father played under Bill Jacobs, who had an incredible .906 winning percentage in 43 games for the Big Orange.

May returned Oneida to its winning ways, a few years after the team had been in a slump.

“It was expected to give everything you have,” Pennington said. “It seems like Coach May brought that back. He was old school. And I think that’s the reason it turned things around.

“And Coach May always said, if it was easy, everybody would be out here doing it,” Pennington said. “That’s kind of the way we lived by. We wanted to prove that we belonged to be out there.”

Jim May became head coach of the Oneida Indians in 1981. A Clinton native, he and his wife, Mary Anne, moved back to East Tennessee with their two sons, Jimmy and Richard.

Both sons played quarterback under their father.

“It was tough at times,” Jimmy May said. “He was probably harder on me than he was on anybody else. He expected more out of me, but I wouldn’t trade it for anything else. I mean, you get to play for your dad. You get to see him every day after school at practice.”

Jimmy May, 49, currently serves as Oneida High School’s athletic director, a position he’s held for a decade. He’s dedicated 27 years of his life as an administrator and coach for the football team. People still approach him about his father all the time.

“You might’ve been the smallest player on the team, but he made you feel special in some way,” May said.

Pennington’s most touching story about Coach May happened shortly before Thanksgiving 1992. His grandmother had died the Monday before the holiday. An 18-year-old Pennington got to school early the next day, perhaps the only time he was at the school 30 minutes before the first bell rang. He decided to walk to Coach May’s office.

“He looked at me and he said, ‘What are you doing here?’ and I said, ‘I’ve come to school, coach,’” Pennington said. “And he said ‘Well, you need to be home with your family.’ I said, ‘Coach, we got a football game this week.’ ‘No, don’t worry about that.’ He kind of closed the door and we sat there and talked. He talked about life and death and love.

“It was just a big moment for me, that he was more than a football coach.”

Pennington and May cried together that morning.

“We didn’t say it to each other, but it’s like he knew that I loved him and I knew that he loved me,” Pennington said. “And more than just being a player, coach. And it just felt like he loved me like a son.”

“[Coach May] told him, he said 'If you want to get stronger and get better, and you’re willing to work at it, you can come work out with the football team each day," Acres said. "He brought him in just like he was one of his players. He wasn’t coaching basketball or anything. He just brought him in. And that’s part of what he was. It was more important to him to make you a better person than anything else he could get out of it."

Acres, 54, has lived in Oneida his whole life. He's worked for the school since 2003. Prior to that, he played tight end for the Indians, wore No. 86, and graduated in the class of 1981. He hosted a show on the local TV station called The Coach May Show, where the two became close.

"He didn’t talk to you in a way that would bring you down," Acres said. "He talked to you to make you a better person."

Oneida reached the pinnacle of its success under Coach May in 1992.

He believed in his team, and he let them know the first day of practice that fall.

“He told everybody to close your eyes and sit there,” Pennington said “And he said, ‘Can you imagine yourself standing in the middle of the field at Vanderbilt Stadium hoisting that state championship trophy? Can you see it? Can you see it?’"

Can You See It became the de facto motto for the Indians.

“We saw it,” Pennington said with a smile.

They sure did see it. They saw a 9-1 record during the regular season, which included wins over teams like Greenback, Coalfield, and Trousdale County.

And they saw a comeback win over Battle Ground Academy in the Class 1A state championship game in Nashville, 13-10.

Coach May had given the small town something it had wanted for decades: a state title.

“When you win one like this, when the kids just didn’t give up on themselves,” May said after the game. “I thought we played with a lot of courage. It wasn’t pretty, but nobody will know that ten years from now. It’s going to be the most beautiful victory you’ve ever seen.”

Life was beautiful for Oneida, and would be for years to come.

The Indians were hosting Cosby, when May suffered a heart attack in the second quarter of the game. He collapsed on the field. The crowd went silent, and a coach started administering CPR.

A LifeStar helicopter came to the field to take May to UT Medical Center. He didn’t make it.

“We learned just a few hours later that he had actually passed away,” Acres said, fighting back tears.

The town gathered at a funeral service at First Baptist Church.

“It’s been 20 years, but it’s still tough because I think about my kids and my brother’s kids, how they didn’t get to see their grandparents, you know?” May said. “They talk about him like they’ve known him their whole life, but they missed out on some of that.

“They’re in a better place and I wouldn’t ever take them away from that,” May said. “It’s still tough, I mean, through the years. It’s been 20 years but it’s still on my mind all the time.”

Tony Lambert picked up the phone at the field house at Anderson County High School. The Mavericks had just beaten Maryville in a region championship game, and the former Oneida assistant was celebrating with his players.

“I went from the highest of highs to the lowest of lows,” Lambert said.

Had it not been for Jim May, Lambert might still have been working in the coal business. May took him to his first coaching clinic, and gave him his first coaching book. Lambert got his start coaching Oneida’s middle school football teams – three of which played for May during the dream season of ’92.

Lambert would eventually join the varsity staff as a receivers and linebackers coach in 1995.

“When I think of him now, sometimes, and see those big glasses that he wore, still see those khaki pants and just him with his commanding posture that he had,” Lambert said, “You could tell there was a man that his passion ran deep for the things that he loved.” 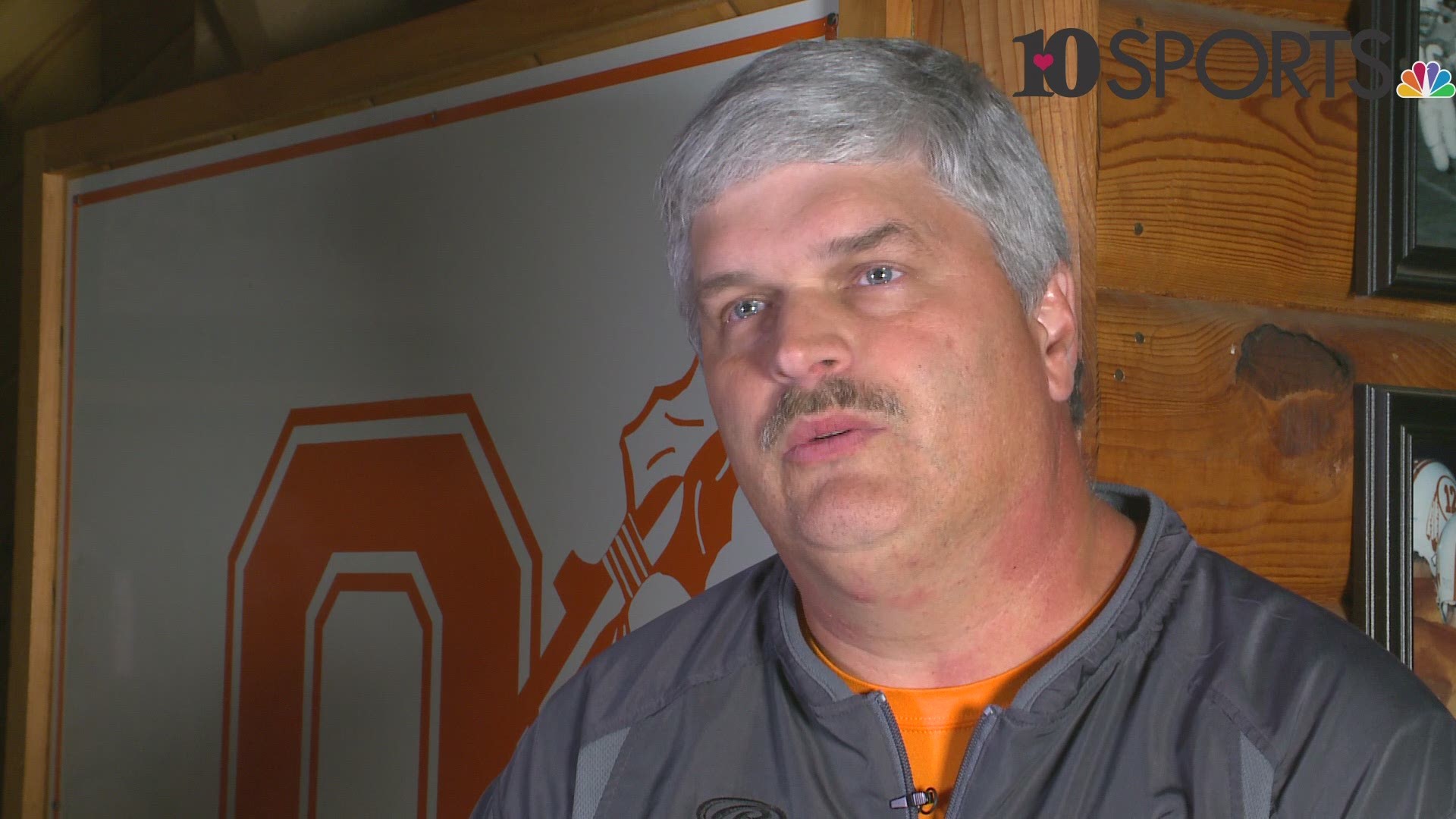 More than 20 years after his death, Jim May continued to bring people together.

The movement to name Oneida’s football stadium after May began in mid-to-late 2017. Tim Smith, the radio voice of the Indians, resurrected the discussion on whether to name the football shrine after the late coach. Talks among the school board had been dormant since 2008.

Naming the stadium was just something “that needs to be done, plain and simple,” according to Pennington.

“It was something to believe in. And you’d like to sit there and think, with Coach May’s work ethic that he instilled in you, it had kind of come to the forefront 25 years later,” Pennington said. “He didn’t give up on me. And the reason I started this was, I wasn’t going to give up on him.”

Pennington remembers it all. The tough workouts. The dry sense of humor.

“He was from Alabama, so he’d make fun of himself, too,” Pennington said. “He always said ‘Jethro and Bubba was standing there and Jethro said ‘Hey, I got some chickens in this sack,’ and he said ‘if you can guess how many’s in there, Bubba, I’ll give you both of them.’ And Bubba said ‘Four.’”

Pennington laughs at the joke – a timeless joke that reminds him of his coach.

The on-field success is still there – he’s led the Indians to winning seasons and playoff appearances for six consecutive seasons – and the impact is still there, too.

“My philosophy is Pride, Class & Character,” Lambert said. “It’s PCC. I think Oneida’s been doing that for a long time, they just didn’t have nobody that put that acronym out there for it.”

That way of discipline started under Coach May.

“As a man, as a father, as a husband, as a coach, I’d like to think I could be half the man Jim May was,” Lambert said.

The head football coach is the face of Oneida. The people love football. They take it seriously. And the coaching staff applies a lot of pressure to itself to make sure it never disappoints. Lambert talks about conversations he’s had with Jimmy May - his colleague, boss and friend.

“I’ve asked him so many times, I say ‘Jim, do you think your dad would approve of what we’re doing? Would your dad approve of the job we’re doing?’” Lambert said. “And Jimmy tells us a lot of times – and you can tell it gives him a moment to think about his dad – and he’d say, ‘Yeah, I think he would.’”

“The kids, the football players now, come up to [Lambert] and say ‘I love you, Coach,’” Pennington said. “ ‘Love you, too, son’. Where else do you hear that? What other high school? That hit me hard, just thinking, man there’s that much love.

“Before every game, [Coach May] walked by every player and touched their shoulder pads,” Pennington said. “And it was just like he’s doing more – he was touching your life.”

The school continues to raise money to build and install a sign outside the stadium. Acres said the school’s goal was $3500, and is still some $600 shy of its target. Oneida tentatively plans on unveiling the sign before the first home game of the 2018 season.

The small town will continue to share stories about its legend, and what he did for the town and for the football team.