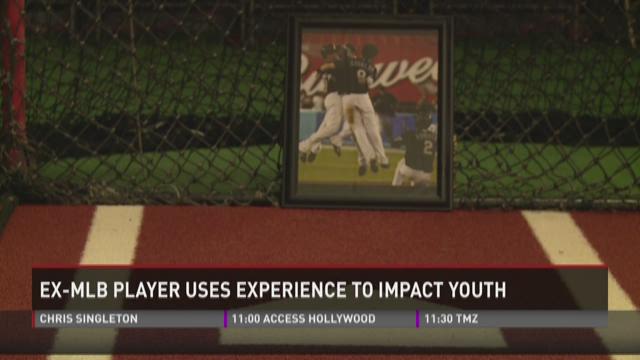 After spending a more than a decade in pro baseball, Knoxville native and Bearden High School graduate, Brett Carroll, is pouring his knowledge into young athletes. He launched BC Athletics in 2016.

"Our primary thing is not chasing trophies to mark us as an organization," Carroll said. "It's about what we going to do with the time we have. And what are we going to do to impact the culture that's different than what most people do."

But before Carroll launched BC Athletics, he had a long journey back to Knoxville. It all began when he was drafted his junior year at Middle Tennessee State University by the Florida Marlins.

"I really told myself at the time if I wasn't selected in the first 10 rounds, It'd be better for me to go back and get my education," Carroll said. And as you'd have it, I was drafted in the tenth round.

For him, it was the beginning of a rollercoaster ride in pro baseball. Carroll says he'd been sent up and down at least 12 times in his career. It was father's day 2007 when he got that first call up.

"I'm sure from my dad's perspective, his son getting called up on Father's Day is a pretty cool gift," said Carroll. It was a real surreal moment to call my mom and my step father and my dad and just share with them that becoming a major league baseball player was going to become a reality."

A couple years later, he had another memorable first. Carroll hit his first major league home run off Hall of Fame pitcher, Randy Johnson. He also became the only player to hit a homer and a triple off him in the same game, and just needed a double to complete the cycle.

"It's just like it was moving in slow motion," Carroll recalls. "I remember hitting it and thinking, that's out. I mean I played video games against randy Johnson and here I am getting to face him. "

Carroll found some consistent time in the bigs after developing as a pinch hitter against left handed pitchers. But, after 11 years of playing pro baseball for six different organizations, it was time to hang it up.

"I don't look back on my career a lot and remember a whole lot of stats . You remember the experience of what you had. You remember that person right there, they affected my life. And that person crossed my path, and what a great season that was with that guy, and that's what you take a way from, the stuff that really matters."

The stuff that really matters is what Carroll's taking into his newest journey.

"Think about just a white ball, it can have a great ripple effect on kids lives, parents," said Carroll. "And I think that's now where I'm to be and what we're doing here."