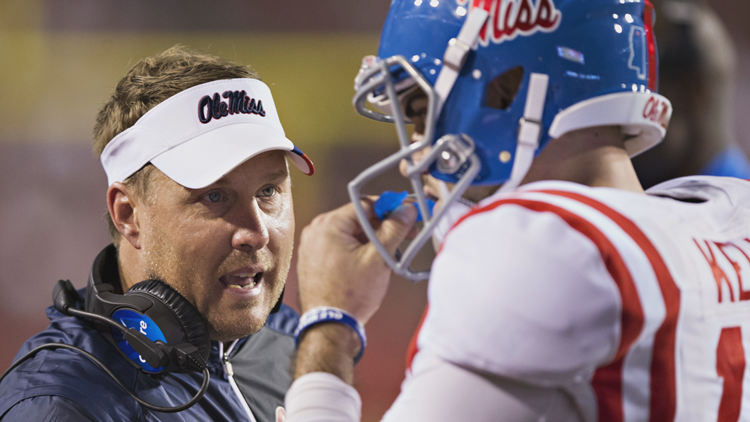 Head Coach Hugh Freeze talks with Chad Kelly #10 of the Mississippi Rebels during a game against the Arkansas Razorbacks at Razorback Stadium on October 15, 2016 in Fayetteville, Arkansas. (Photo by Wesley Hitt/Getty Images)

Freeze was in the mix for Tennessee's vacant offensive coordinator position, along with other Power 5 assistant jobs but will now take over at Liberty, a program that recently transitioned to the FBS level and is competing as an independent with no conference affiliation.

The Vols have moved on to other candidates and planned to interview Houston offensive coordinator Kendal Briles and Alabama quarterbacks coach Dan Enos, according to govols247.com.

Freeze led Ole Miss to back-to-back wins over Alabama in 2014 and 2015 and is one of only four head coaches to beat Nick Saban more than once since Saban arrived at Alabama in 2007.

After coaching the Rebels for five seasons, Freeze resigned in July of 2017 after an investigation revealed "a pattern of conduct that is not consistent with our (Ole Miss) expectations as the leader of our football program."

USA Today reported records of calls to a number associated with an escort service from a university phone. Freeze later told ESPN he denies making those calls.

Shortly after his resigning, three women, who were former students from his time at Briarcrest Christian School just outside of Memphis, described to USA TODAY Sports that Freeze made them "uncomfortable" with his pattern of disciplining. Freeze has said these accusations are false, while the school said current and former administrative officials were "unaware of any claims of misconduct by Freeze."