Weekly is ending his 35-year coaching career with 1,450 wins between his time at Pacific Lutheran, Chattanooga and Tennessee -- the fourth all-time high in the NCAA. 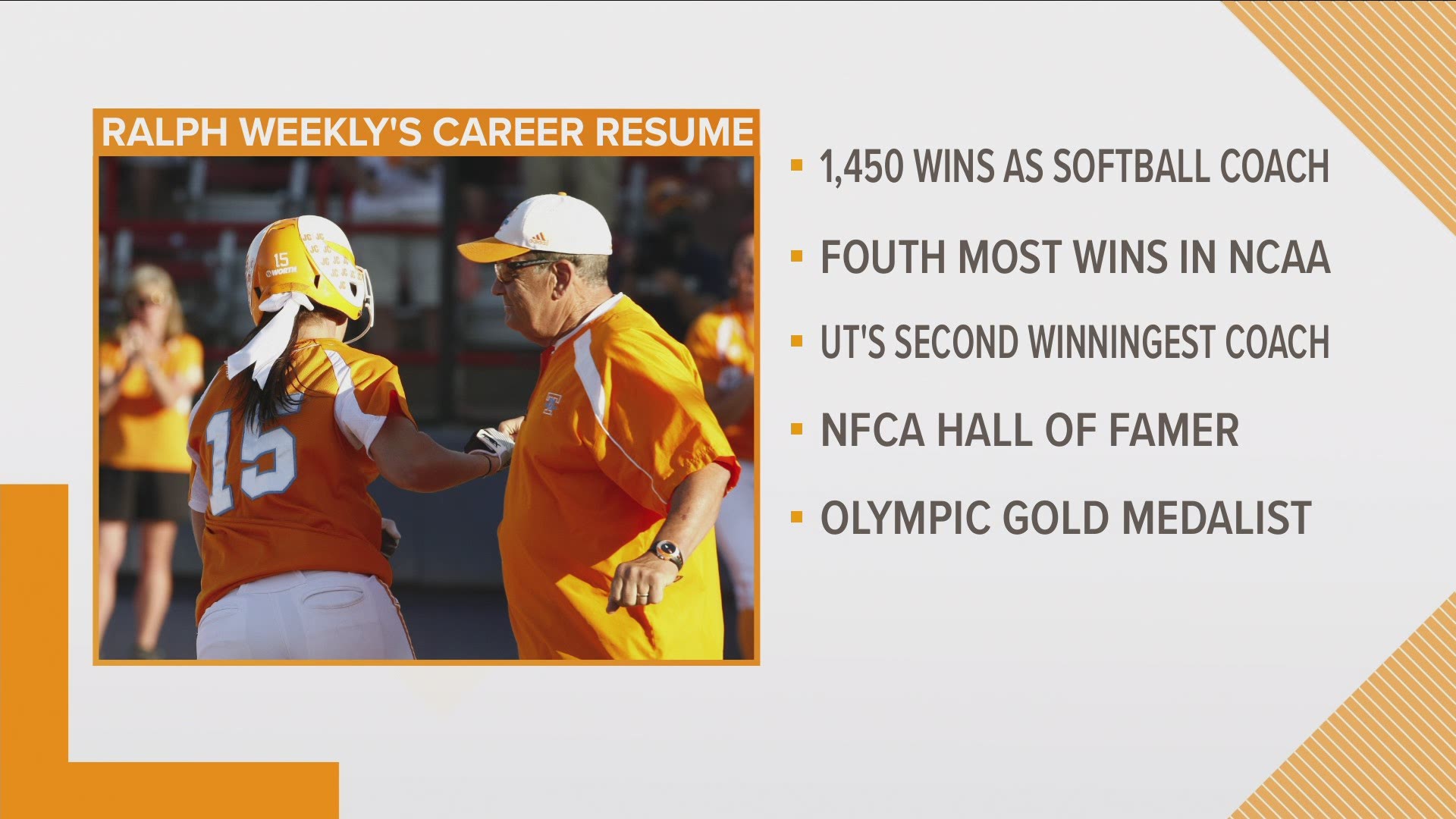 After 20 years of leading the Lady Vols softball team, coach Ralph Weekly has decided it's time to hang up his hat.

Weekly made the announcement Wednesday he is retiring as co-head coach. His wife Karen Weekly, who led the program alongside him, will take over all head coaching responsibilities and has agreed to stay on through June 2025.

"I have worked every day since I entered the military at age 17," Ralph Weekly said. "I have had a fulfilling life as a father, husband, student, soldier, special agent, teacher and coach. In every endeavor, I have been surrounded by amazing people whose talents allowed me to succeed and made me a better person. I thank Joan Cronan for hiring us at Tennessee and allowing Karen and I to mentor and coach hundreds of wonderful young women. I was fortunate to work with many fantastic coaches and administrators, to include the legendary Pat Summitt. I thank every player I ever coached for their commitment to excellence on and off the playing field. Each player, male or female, has a place in my heart. I will always be a VFL and cherish the memories I made at each stop. Most of all, I thank my family for their support, patience and counsel. Karen is the smartest person I have ever known. I know she will make Tennessee softball even greater and continue our quest for a national championship."

"First, I'd like to acknowledge the extraordinary tenure and legacy of Ralph Weekly," Tennessee vice chancellor and director of athletics Danny White said. "He and Karen have built Tennessee softball into one of the top programs in all of college softball. Ralph has given his all for Tennessee for more than two decades, and he certainly elevated the stature of our program in every facet during that span.

Weekly is ending his 35-year coaching career with 1,450 wins between his time at Pacific Lutheran, Chattanooga and Tennessee -- the fourth all-time high among NCAA softball coaches.

During his time, the Lady Vols have reached the postseason every year since 2004, hosted 16 straight NCAA regionals, advanced to 11 Super Regionals, and made seven trips to the Women's College World Series -- placing in the top 3 on five occasions, including two national runner-up finishes.

A 2011 NFCA Hall of Fame inductee, Ralph Weekly is tied with his wife Karen Weekly as the second-winningest coach in Tennessee Athletics history with a 949-300-2 (.759) mark, trailing only the legendary Pat Summitt.

You can read more about his career and legacy at this link.