1998 National Champions: A thriller in the Carrier Dome

A national title run began in New York, with a back and forth thriller against Syracuse. 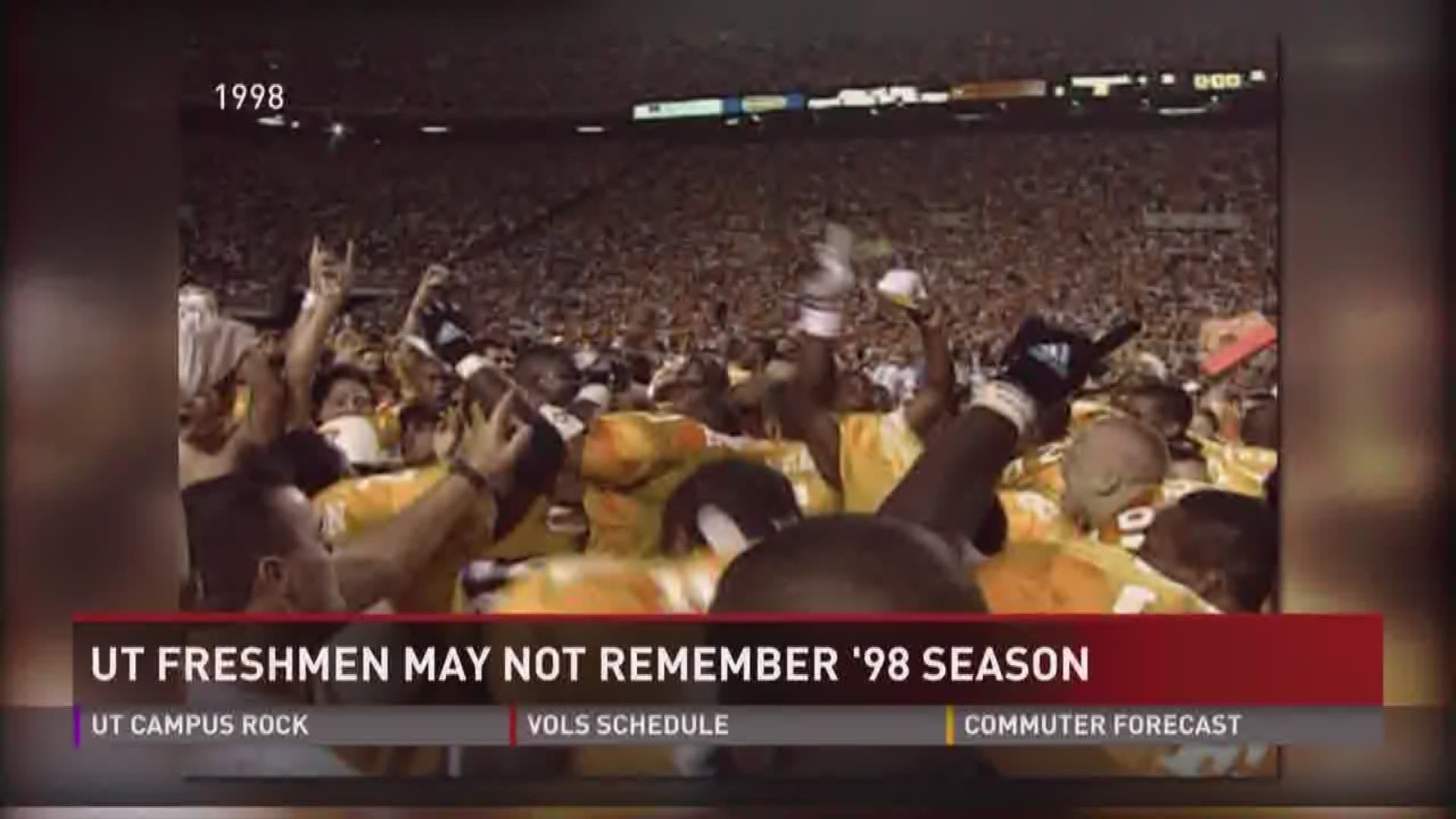 When the 1998 Tennessee Volunteers stepped onto the hard turf in the Carrier Dome to take on Syracuse to start the season, there wasn't a lot of national conversation about UT getting a chance to win the first ever BCS Championship. Fresh off a SEC Championship in 1997, the talent departure was enough to question the validity of any postseason run. Eight players were picked in the NFL Draft, three coming in the first round: Marcus Nash, Terry Fair and most importantly, quarterback Peyton Manning.

The eventual Super Bowl champion had left his mark all over Rocky Top and college football. First team All-American, Maxwell Award winner Heisman runner-up, the list goes on and on. Tee Martin was the quarterback to step up and try to fill those large cleats Manning left for the next signal caller in Knoxville.

"That's something I think that every backup quarterback who has the chance to be the guy has to go through," said Martin prior to the season getting started. "You know, it's natural human nature for you, for people to say that they want you to be like the guy before you. You know, when a president leaves, they want the next president to be like him, you know? I'm going to go in knowing that, but knowing that I have to make my own road, you know, and let people see that I'm a different kind of person and I hope they accept me like that."

Martin would have an opportunity to prove himself right away. The season opener against Syracuse would be an AP Top 25 matchup. The Vols were No. 10 in the preseason and Syracuse was No. 17. Tee Martin would have to battle not only the ghost of Peyton Manning, but another soon-to-be iconic quarterback: Donovan McNabb.

Things couldn't have started better for UT if they tried. The very first possession, the Vols went 80 yards down the field in just seven plays, hooking up with senior wide receiver Peerless Price on a 12-yard pass for a touchdown.

Syracuse responded with a touchdown pass of its own, McNabb to tight end Steve Brominski, to tie the game at 7.

Before halftime, Martin called his own number: a quarterback sneak from the goal-line gave Tennessee a 14-7 lead through two quarters.

In the third quarter, Syracuse added two field goals to cut the lead to 1 point, but in came running back Jamal Lewis. Lewis took flight over defenders and across the goal-line to push the Vols further ahead, 21-13.

The defense joined in on the fun. Defensive tackle Darwin Walker stripped McNabb of the football, Tennessee recovered, and a Jeff Hall field goal pushed the lead to 11 for the Vols.

In the 4th quarter, Tennessee faced its first moment of adversity in the '98 season. McNabb drove Syracuse down the field twice, throwing a touchdown to receiver Kevin Johnson and taking it in himself on a run. Syracuse now led 27-24. The ability of the Syracuse quarterback was not lost on Tennessee head coach Phillip Fulmer.

"From a mobility and strength standpoint, he's the best I've seen," said Fulmer to reporters after the game. "He's a good passer and all that, a very good passer, but I've never seen anybody that can escape like he can."

Tennessee would add a touchdown in the fourth quarter to take back the lead, but McNabb and Syracuse were far from out of it. Two more field goals, one set up from a long Kevin McIntosh kickoff return and another from a deep McNabb pass, put UT into a 33-31 hole with 2:38 left in the game.

A field goal would win it for the Vols, but the team would have to get in range first. On fourth down during the drive, Tee Martin fired a pass to a slanting Cedrick Wilson, but it would fall to the ground incomplete. Just when it looked like the Vols would start the season 0-1, a yellow flag came flying down from the belt of a nearby referee.

"It was a great call, a good call, the right call," said Fulmer.

"Yeah, I feel like it was pass interference, thank God the ref called it," said Price.

For Wilson, he said the defender meant to do it.

"I don't think he was very surprised because he knew if I caught and made that catch I could have made it out of something big so, you know, he would rather take the pass interference than anything," said Wilson.

With time ticking away, who does Tennessee turn to? Who else, but Jamal Lewis. The running back picked up 13 yards, finishing with 139 yards in the game, setting up senior kicker Jeff Hall, who nails the field goal with four seconds left in the game.

After being pulled out from a dogpile of teammates, Hall had time to reflect on the game-winning kick.

"It hadn't happened since my freshman year, that's for sure, so it's been a while, but when I went out there I'd done my prayer time, I'd done my Bible study and I just knew, I had such a peace going out there, it went so quick, but you know I've just got to give all the glory to God he put me out there, he put me in that position and then he put the ball through the uprights, so all the glory to him," Hall said.

Fulmer said after the game, there was much to takeaway for the rest of the season.

"I thought the whole game was just something to learn from, it was physical, it had exciting plays in it, it had plays in the kicking game in it, both teams wouldn't quit. I just thought it was a perfect game for television and fans and one that makes coaches old in a hurry."