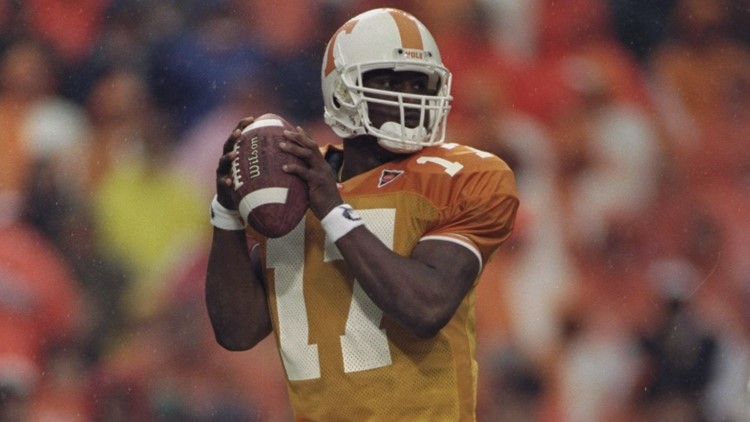 QB Tee Martin #17 of the Tennessee Volunteers drops back to pass during a game against the Arkansas Razorbacks at Neyland Stadium in Knoxville, Tennessee. The Volunteers defeated the Razorbacks 28-24. Mandatory Credit: Jonathan Daniel /Allsport

The 1998 season was full of thrillers decided in the final minutes of the game. Tennessee's home matchup in the last week of September against Houston was not one of them. The AP Poll had the Vols as the No. 4 team in the country and they showed why against the Cougars.

Quarterback Tee Martin was in top form, throwing his first of four touchdown passes to a darting Cedrick Wilson down the seam. Martin followed it up with a swing pass to Jamal Lewis who showed his ability to make defenders look silly in the open field, juking all the way into the end zone. Martin went to his backs for the third touchdown of the game, setting up Shawn Bryson with a screen pass. Bryson cut across the field and took care of the rest, scoring a touchdown in back to back games.

Jamal Lewis wasn't ready to stop scoring there. Later in the game, he turned a simple handoff into a 60-yard touchdown run. In quintessential Lewis fashion, he used a combination of strength and speed, stiff arming a Cougar defender in the middle of the field, then bouncing outside and outrunning the rest of the Houston defense down the sideline.

It would be his final touchdown of the season in Neyland Stadium.

Three games into the '98 season, Martin and Peerless Price were averaging a touchdown a game. The third of the season was the final touchdown of the day for Martin, he threw out wide to Price, who made a man miss and had nothing between him and the end zone but 20 yards of grass.

Freshman backup quarterback Burney Veazey entered late in the game to take over the signal caller duties and was able to keep the scoring going. Veazey found fellow freshman, tight end John Finlayson, off a play action pass. No. 96 took care of the rest, diving into the end zone.

There was a major loss however. Linebacker Al Wilson was injured during the game. He was on the sideline without pads on in the final moments of the Houston win with his arm in a sling. This was the first of many injuries Wilson would grit through during the '98 season.