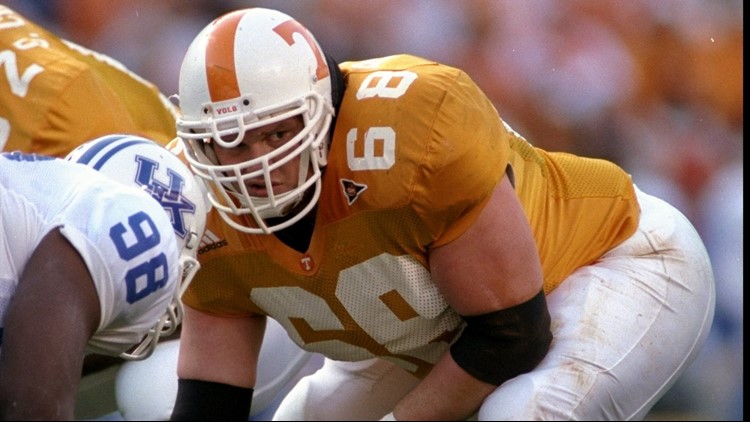 Center Spencer Riley #68 of the Tennessee Volunteers in action during the game against the Kentucky Wildcats at the Neyland Stadium in Knoxville, Tennessee. The Volunteers defeated the Wildcats 59-21. Mandatory Credit: Scott Halleran /Allsport

With one game left to go and Kansas State and UCLA hot on its tails, it wasn't just about if Tennessee won its final game of the season in Nashville against Vanderbilt, but how it won.

Tennessee started things out very slowly, a Jeff Hall field goal early on gave the Vols a 3-0 lead, but nothing else was working on offense against a poor Commodore team. Just like they had done so many times this season, Tee Martin and Peerless Price got the team going. The quarterback hit Price out to the left in the flat. The wide receiver made two defenders miss and was off to the races; a 68-yard scamper to give Tennessee a 10-0 lead. A few minutes later, Tennessee sat just inside of Vanderbilt territory and needed only two plays to score. Two runs from running back Travis Henry and the Vols made it a three possession game, 17-0 over the Commodores.

Then came the turnovers.

First, Deon Grant picked the ball out of the air from quarterback Greg Zolman, setting up another Jeff Hall field goal and a 20-0 lead at halftime.

On the very first possession of the third quarter, Tennessee slammed the door shut on Vandy with a thunderous hit from linebacker Eric Westmoreland. The receiver fumbled the football, Chris Ramseur scooped it and scored it. Tennessee led 27-0.

Up next, two more Zolman interceptions at the hands of Dwayne Goodrich and Brad White, followed by the go-to goal line play: a Tee Martin QB sneak. Tennessee led 34-0.

A Darwin Walker fumble recovery set up a Travis Stephens touchdown and a 41-0 final score. Tennessee added a Derrick Edmonds interception, just for good measure. Six turnovers, five touchdowns and an 11-0 finish to the regular season, the first 11-0 Tennessee team since General Neyland won a National Championship in 1938.

Tennessee's dominance of Vanderbilt continued. It was the sixteenth consecutive win against the Commodores.

Up next for the Vols? The SEC Championship game in Atlanta, Georgia against Mississippi State with a chance at the first ever BCS National Championship.