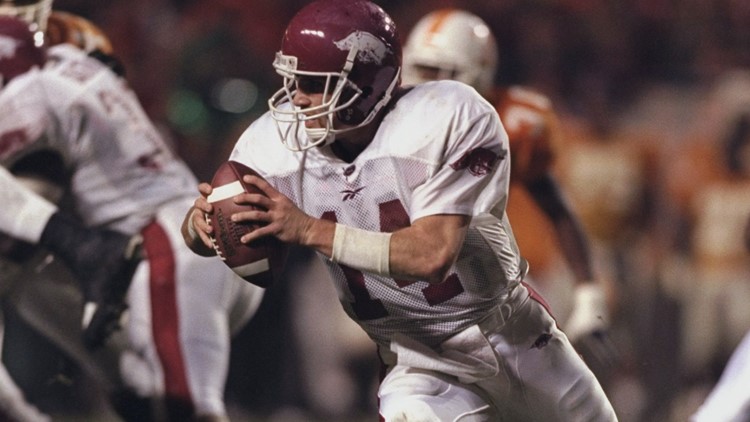 14 Nov 1998: Quarterback Clint Stoerner #14 of the Arkansas Razorbacks in action during the game against the Tennessee Volunteers at the Neyland Stadium in Knoxville, Tennessee. The Volunteers defeated the Razorbacks 28-24.

Tennessee and Arkansas meeting in Neyland Stadium on November 14 was everything a college football fan could want. A top ten matchup of unbeatens in one of the most pivotal games of the season. With an Ohio State loss the week before, the Vols moved up to No. 1 for the first time in more than 40 years. Sitting at 8-0, it was one of the best starts for a football team on Rocky Top. Only three squads stood between UT and an undefeated regular season: Kentucky, Vanderbilt and the No. 10 Razorbacks.

Of all the teams in the SEC to give the Vols a run for their money this late in the season, you never would have guessed Arkansas. The Hogs were coming off of a 4-7 season in 1997. Head coach Danny Ford was let go and new head coach Houston Nutt was coming into the program with big talk, but only a year of head coaching experience in NCAA Division I-A, he was the head coach at Boise State for only one season the previous year. But Arkansas was one of the feel good stories of college football in 1998. The Razorbacks were 8-0 and marched into Neyland Stadium with an upset on its mind.

With last second wins and miraculous plays throughout the season, it looked as if Tennessee was the team of destiny this year, but for nearly four quarters, it seemed destiny had turned its back on the Vols.

Rainy conditions on Rocky top made the game less about the plays you made, but the mistakes you committed. Tennessee made a lof of them in the first half. A Travis Stephens fumble in the first quarter helped set up the Razorbacks in good field position, nearly inside the red zone. Quarterback Clint Stoerner capitalized, rolling out to his left, finding receiver Emmanuel Smith in the flat. A Dwayne Goodrich missed tackle helped Smith sprint and dive into the end zone for the first score of the game. Arkansas led 7-0, the first time Tennessee trailed in a game since September 19 against Florida.

Arkansas kept moving the ball well in the 1st quarter, with the help of a few special team penalties on Tennessee (running into and roughing the kicker). With one minute left in the first quarter, inside the red zone and well inside field goal range, Stoerner heaved a pass into the end zone, only to have a player in orange come down with it. Deon Grant kept the Razorbacks off the board, a pivotal moment for the Vols, a chance to switch momentum. A chance, UT did not capitalize on.

The Tennessee offense stalled, Arkansas got the ball back to end the first quarter, and with not a single second off the clock in the second frame, Stoerner found receiver Anthony Lucas streaking down the right sideline matched up against Steve Johnson. Lucas high pointed the ball, Johnson fell and 7 more points were on the board for Arkansas. A 62-yard touchdown pass gave the Razorbacks a 14-0 lead on the road against the No. 1 team in the country.

The offense, looking to recover, marched back on the field for the Vols. The very first play from scrimmage, Tee Martin throws to the right sideline and is intercepted. Nothing seemed to be going Tennessee's way that night.

Later in the second quarter, UT finally got on the board, a Jeff Hall field goal after the senior missed one earlier in the game. 14-3 Arkansas leads.

Stoerner and the Razorbacks kept their foot on the gas, driving down the field again, rolling out again and finding Anthony Lucas again. 21-3 now, Tennessee trailed with a little more than three minutes in the first half. With enough time for one more drive, UT needed any momentum it could get for the second half. The next few plays would be critical to deciding the outcome of this top ten matchup.

The first step - give Travis Henry the ball. Even with the offense struggling, the running back was racking up yards. His first carry went for more than 10. Another Henry carry goes nowhere, stopped at the line, but play action on second down opens up the passing lanes for UT and Tee Martin. The quarterback finds receiver Jermaine Copeland near midfield, plus a late hit from Arkansas gave Tennessee 15 more yards. With the ball on the 36-yard line and 2:18 left int he half, Martin finds Peerless Price in the right corner of the end zone, one of his best throws of the game. UT gets to take a breath, they could move the ball, they could score.

In the second half, Tennessee held Arkansas to a punt on its first possession, but Copeland fumbled trying to make a move, giving Arkansas a chance to recover and score points.

The Vols were getting in sync now on offense, Travis Henry ran and ran and ran the ball and Martin capped off a great drive with a run of his own; four yards into the right corner of the end zone.

We arrive in the fourth quarter, a one-score game and Arkansas in a position to make it more. with 7:31 left to go, Stoerner and the Razorbacks have the ball on the Tennessee 13-yard line. The ball is snapped, the quarterback drops back in the pocket and like so many times this season, Al Wilson comes charging through a gap in the offensive line. In a show of sheer will power, determination and strength, Wilson ripped Stoerner down with a one-handed sack, pushing the Razorbacks into a much more difficult field goal situation. An incomplete pass on third down set up Arkansas for a chance to move ahead seven points.

The ball is snapped, the kick is up and - blocked! Deon Grant jumped straight up and slapped the ball in the air.

Possessions go back and forth, neither offense can take advantage. With 3:04 left in the game, still leading, Arkansas is forced to punt. The snap is high! The ball is kicked out of the back of the end zone. It's a safety, Tennessee adds two points, a field goal can win it.

Peerless Price returned a kickoff 100 yards against Alabama earlier that season, this time, with time running out, he finds a whole, electrifies the crowd and gets the ball to midfield. A few more first downs and the Vols can win the game with the trusty leg of Jeff Hall, a kicker that showed time and time again in 1998, he can be counted on in the clutch. But he won't get a chance. On 4th and 9, with 1:59 left to go, Martin throws to Price, Arkansas makes a good play on the ball and the pass falls incomplete. All Arkansas has to do is run out the final 1:54 of the game to remain undefeated and knock off the No. 1 team in the country.

But the rain. The rain forced mistakes all game. Dropped balls, poor throws, missed field goals... and soggy turf. With 1:47 left, Arkansas quarterback Clint Stoerner dropped back, got his legs tangled with an offensive lineman, stumbled and then fumbled the football into the hands of Tennessee defensive lineman Billy Ratliff.

With 1:43 left to go, Tennessee needed to get into field goal range to take a one point lead. Naturally, Travis Henry touches the ball five times. He finishes the game with 197 yards rushing on 32 attempts including a touchdown. It came with less than a minute left. The Vols take a knee on the point after and win.

Two games to go in the regular season. Destiny took its time, but came back for Tennessee.