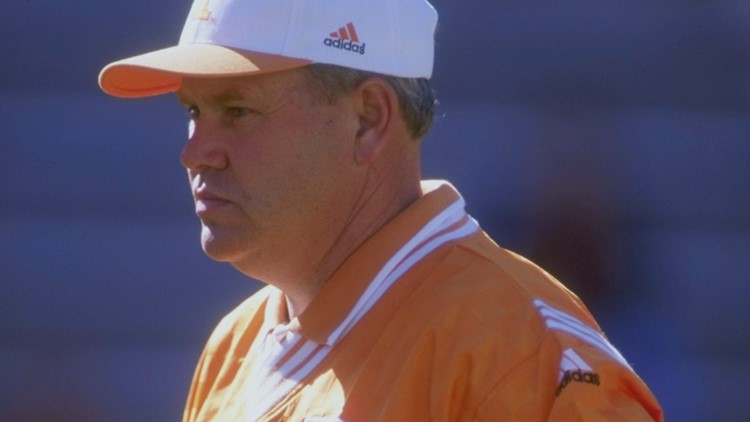 In its first road SEC game of the season, the Vols started off hot, but sputtered down the stretch, leaving the door open for a near upset at Jordan-Hare Stadium.

Auburn was unranked coming into the matchup against the No. 3 Vols, but came out swinging at home. Running back Demontray Carter needed just three carries to get the Tigers into the red zone. Tennessee was on the verge of trailing early in a hostile environment.

Two plays later, Auburn quarterback Ben Leard went for a shovel pass with disastrous consequences for the Tigers. Defensive end Corey Terry absolutely leveled the quarterback mid-pitch. The ball was deflected up in the air and defensive tackle Shaun Ellis came up with it. He took the ball 89-yards the other way, with half of the Tennessee defense escorting him into the end zone for a touchdown, putting the Vols up 7-0.

"I just followed down the line and the ball was up in the air," said Ellis. "I just ran and caught it, it fell in my hands and just took off running. I was just worried about not fumbling."

Not to be outdone by the defense, running back Jamal Lewis took a carry the next Tennessee possession 67-yards to the house. In less than five minutes, UT was rolling Auburn, leading 14-0. Add a Jeff Hall field goal, and the Vols took a 17-0 lead into the second quarter.

The tide would quickly turn on Tennessee.

Earlier in the first quarter, Lewis was grabbed from behind by the ankle. He came out of the pile kicking his leg, with a visible limp.

"I knew it was hurt when I first did it," said Lewis later that week. What he did exactly wouldn't become more evident until the fourth quarter. Running down the right sideline, when Lewis tried to make a move back inside, his foot stepped out of bounds. He came up limping worse than before.

"It hurt when I tried to make that cut so I said I'm gonna go ahead and come out."

It was a knee injury, a torn lateral collateral ligament. Lewis would have surgery the next week and wouldn't play another down for the Vols in the '98 season. It was a huge blow for Tennessee's chances of winning the conference or making an appearance in the BCS championship game. Lewis was the team's leading rusher, he had nearly 500 yards on the ground over the course of four games. Tennessee would have to find a way to win without him for the rest of the season, but first, the Vols had to escape the trip to Jordan-Hare Stadium.

The fast start for UT ground to a stop. After scoring 17 points in the first quarter, the Vols wouldn't add another point to the scoreboard for the rest of the game. Auburn tacked on a field goal, and was knocking on the door on the Tennessee goal-line in the first half. UT's defense, for the second time in the game, came up huge, this time stopping the Tigers on four consecutive plays from the one inch line. After adding two more field goals, Auburn trailed Tennessee by just eight points with seconds left in the fourth quarter. A heave into the end zone was batted down by a trio of Tennessee defenders: Raynoch Thompson, Derrick Edmonds and Steve Johnson. UT survived its first road SEC game of the season, 17-9.

"I thought our defense played its hearts out too," said head coach Phillip Fulmer after the game. "It's just a heck of an effort from our defensive team and we'll get better from it."

Quarterback Tee Martin, who finished the game with just 68 yards in the air, completing 35 percent of his passes, said the game plan was different compared to what the Vols did against Houston the week before.

"We knew it was going to be a challenge for us up front," said Martin.

"We knew we were going to try and come in and get our running game going, kind of like a Florida game approach, get the big guys tired and maybe in the third or fourth quarter we can break some big runs, but they hung in there and it was good play by the defense of Auburn."

Tennessee would fall from No. 3 to No. 4 in the AP poll after the win against the Tigers. With Jamal Lewis out indefinitely and a matchup up in Athens against No. 7 Georgia, the Vols would have to adjust quickly to keep its BCS hopes alive.