Earlier this week, Walker said any outraged fans were welcome to stay home from future games if they felt disrespected by players protesting social inequality and police brutality 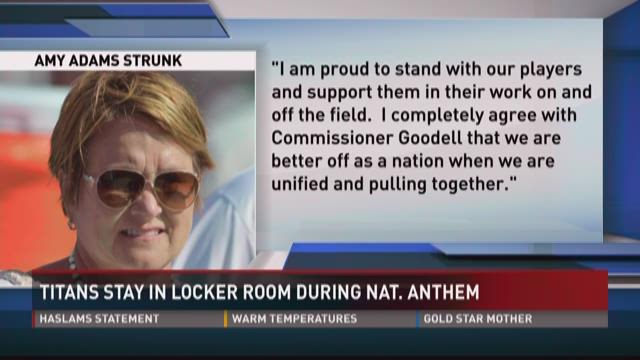 Titans tight end Delanie Walker and his family have received death threats since he made comments defending the team's decision to skip the national anthem Sunday at Nissan Stadium, Walker in a post on social media Thursday night.

Earlier this week, Walker said any outraged fans were welcome to stay home from future games if they felt disrespected by players protesting social inequality and police brutality. The Titans were among three NFL teams to skip the anthem Sunday, after President Donald Trump's inflammatory remarks during a speech Friday in Alabama.

Despite reports and memes that claimed otherwise, the NFL doesn't not have any set rules for player behavior during the national anthem. Just guidelines. Autumn Allison/USA TODAY NETWORK-Tennessee

The anthem singer for Sunday's Titans game, Meghan Linsey, also said she has received death threats after she took a knee following the anthem.

The Tennessee Titans fans are the best in the NFL. What we do on the field every Sunday would mean nothing without knowing we are supported by the city of Nashville and the fans that have been by our side over the years.

One of the many things I gained from spending time in the Middle East on the NFL’s USO Tour this spring, is an appreciation for America’s core values and an even greater appreciation for the men and women that defend those values. In being asked about our team’s decision on Sunday to stay in the locker room for the National Anthem, I used strong words to defend our right to make our own choices. Both my choice to spark dialogue for positive change and the fans’ choice to attend our games. It’s that freedom of choice that makes our democracy the envy of many around the world.

The death threats that my family and I have received since my comments are heartbreaking. The racist and violent words directed at me and my son only serve as another reminder that our country remains divided and full of hateful rhetoric. These words of hate will only fuel me in my efforts to continue my work reaching out to different community groups, listening to opposing voices, and honoring the men and women in the Armed Forces who risk their lives every day so that we may have this dialogue.
I am proud to represent the many faces of Titans fans and believe that only through a more respectful discourse can we achieves the goals of unity, peace and racial equality that I know we all strive for.

In response to the death threats against Walker, the Titans responded: "We have been made aware of the threats to Delanie and we have passed those along to NFL Security to examine.”

The Titans (2-1) have yet to determine how they’ll handle the national anthem before Sunday’s game against the Texans (1-2) at Houston (noon CT, CBS).

They play three of their next four games on the road, with the exception being a nationally televised Monday night game against the Colts on Oct. 16 at Nissan Stadium.