Derek Hunt is beginning his first season as head coach at Maryville after coaching under 11-time state champ George Quarles. 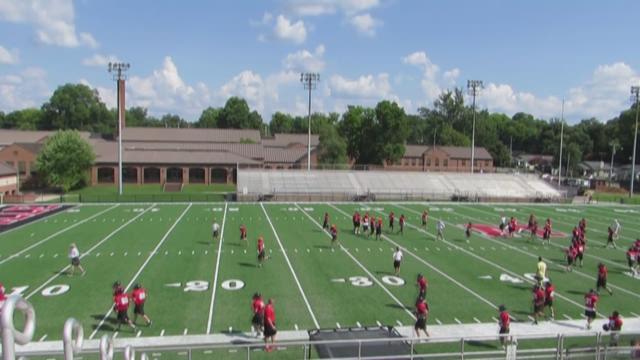 When Derek Hunt thinks of Maryville football, he thinks of tradition.

"It was a dream come true for me to get to play for Maryville High School and I got to play for coach Quarles," Hunt said.

Hunt won three state championships as a quarterback for the Rebels. His father won two titles in the 1970s as a Rebel.

Now the 28-year-old Hunt is beginning his first season as head coach at Maryville.

1 / 18
The Maryville Rebels practice before the 2017 football season.

"I think of all the people that played a huge role in my life and they all have something to do with Maryville football, Hunt said."

"What a blessing that was to get to learn from him and all I did was try to soak it up, I just listened to him," Hunt said. "I didn't talk much, especially those first couple years. I just wanted to learn from these coaches who have so much wisdom and they're not just great coaches but they're great men off the field."

"I've known him since I was seven when he was helping coach my little Rebs team, he was my biddy league coach when I was ten," senior wide receiver Christian Markham said. "A lot of our guys have known him for a long time. He's special to us so we want to make him proud."

"We have great kids that grow up wanting to play football for Maryville High School. I was one of those kids," Hunt said. "When they get to us, we don't have to coach effort a whole lot. That's a huge thing. They want to be here. They want to put a banner up there."