PREVIEW: No. 2 Alabama vs. Tennessee 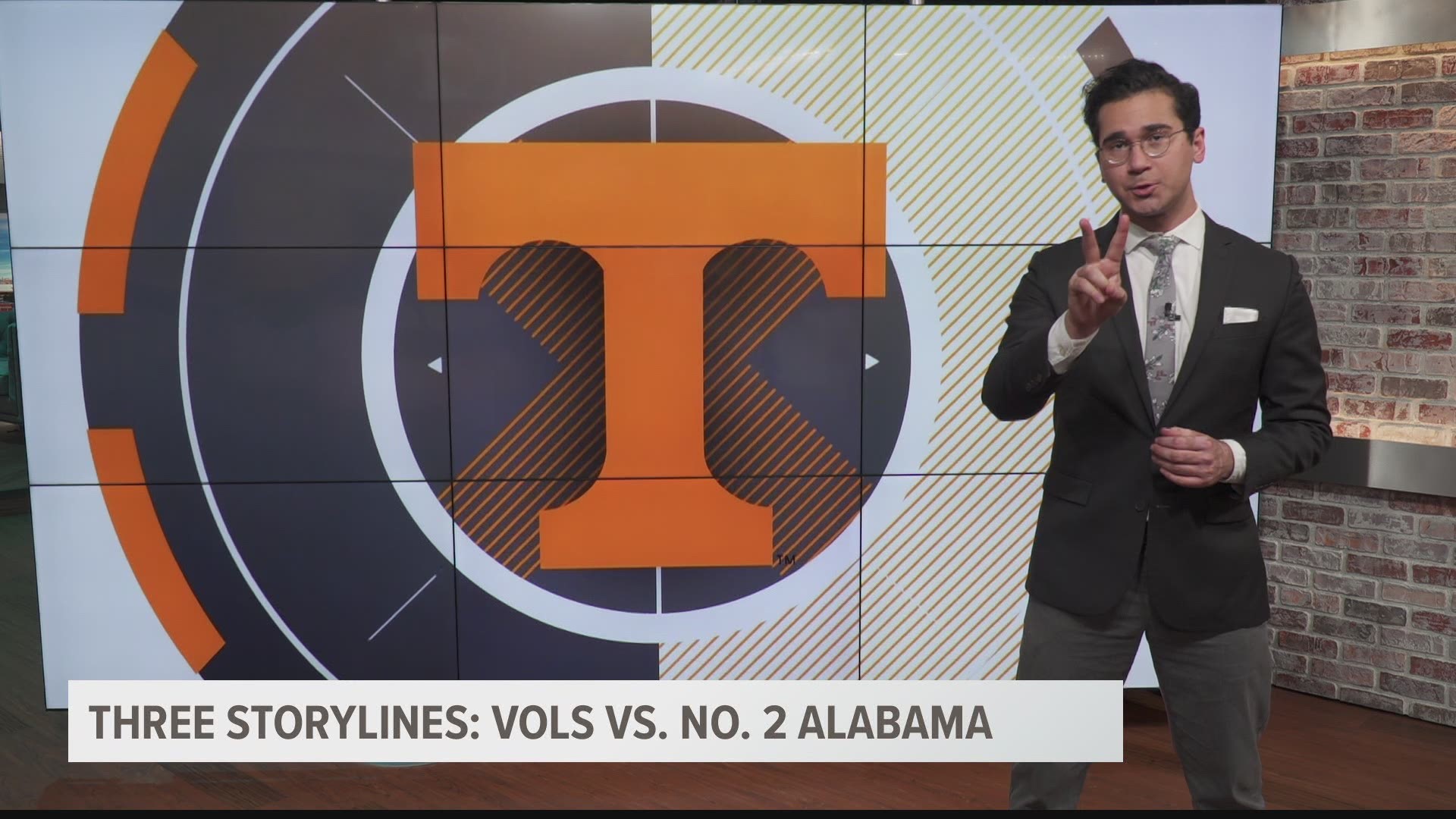 KNOXVILLE, Tenn — The Third Saturday in October has been moved to the Fourth Saturday in October. No matter the date, one thing remains the same: Tennessee will have a huge challenge against an incredibly talented No. 2 Alabama in Neyland Stadium at 3:30 p.m.

There are streaks of all kinds to reference for this game:

-Tennessee has lost 13 straight games to the Tide, it's last victory coming in October of 2006

What does that mean for Tennessee's chances against Alabama? The oddsmakers have the Vols as a three touchdown home underdog.

The reason for overwhelming Alabama leaning is two-fold: 1) Alabama and 2) Tennessee.

This is not your grandfather's Crimson Tide team. Alabama scores points and scores them often. Alabama is averaging 48.5 points per game, which is the best in the SEC and the second-best in the country. The high rankings continue for most offensive stats:

This is led by a few star players on Steve Sarkisian's offense. Quarterback Mac Jones has evolved from a liability when replacing Tua Tagovvailoa to, what Tennessee head coach Jeremy Pruitt described as, "efficient as any quarterback that I've seen in this conference."

RELATED: University of Tennessee sells out for home game against Alabama

Jones worked with the practice squad when Pruitt was still the defensive coordinator at Alabama. His growth, Pruitt said, is remarkable.

"When you look at how much he’s improved in four years it’s really interesting. When he was a scout team quarterback, compared to four years later, it just shows you over time when you’re in the same system you can continue to develop. He’s really done a nice job doing that," Pruitt said.

That translates to 1,518 passing yards, 12 touchdowns, two interceptions and a completion percentage of 78.3 percent.

Of course, having the supporting cast around you always helps a quarterback, and boy does he have one.

Running back Najee Harris is picking up yards at a clip of 6.0 yards per carry. On top of that, he's constantly finding the end zone: Harris leads the country with 11 rushing touchdowns by himself. For comparisons sake, Tennessee's Eric Gray and Ty Chandler have four rushing touchdowns combined this season.

So I just went through and did some math on Alabama's offense. Bama scores a TD on 55% of possessions. On average its touchdown drives go for...

The one thing Alabama doesn't do well this year, or at least, not up to its usual standard, is play defense. Alabama is giving up 28.8 points per game as well as 458.3 yards per game. The Tide's third down conversion defense also ranks near the bottom of the SEC, allowing opponents to pick up a first down on third down 51.5 percent of the time. Big picture, it's important to note these numbers are inflated by Alabama's Oct. 10 game against Ole Miss. The Rebels put 48 points on the board. No other opponent Alabama has faced this season has scored more than 24.

As for Tennessee, much of the concern surrounding this game springs from the home loss to Kentucky, the first such loss for Tennessee against the Wildcats at Neyland Stadium since 1984.

Tennessee's offense has grown stagnant, scoring just one touchdown in the past six quarters, while allowing the opposing defense to score three touchdowns against them. Turnovers are a recipe for disaster, especially against good teams like Alabama.

Based on Alabama's defense so far this season, there could be opportunities to score for the Vols on Saturday, but can the defense hold off the Tide? Tennessee currently has the SEC's second-best pass defense, giving up 213.2 yards per game. Meanwhile, Alabama's passing offense is No. 1 in the conference.

Getting off the field on third down has proven a challenge for Tennessee this season, allowing opponents to convert third downs 44.8 percent of the time, which ranks 53rd among 77 teams in the country.

Tennessee and Alabama will get started at 3:30 p.m. in Neyland Stadium. You can watch the game on SEC Network.