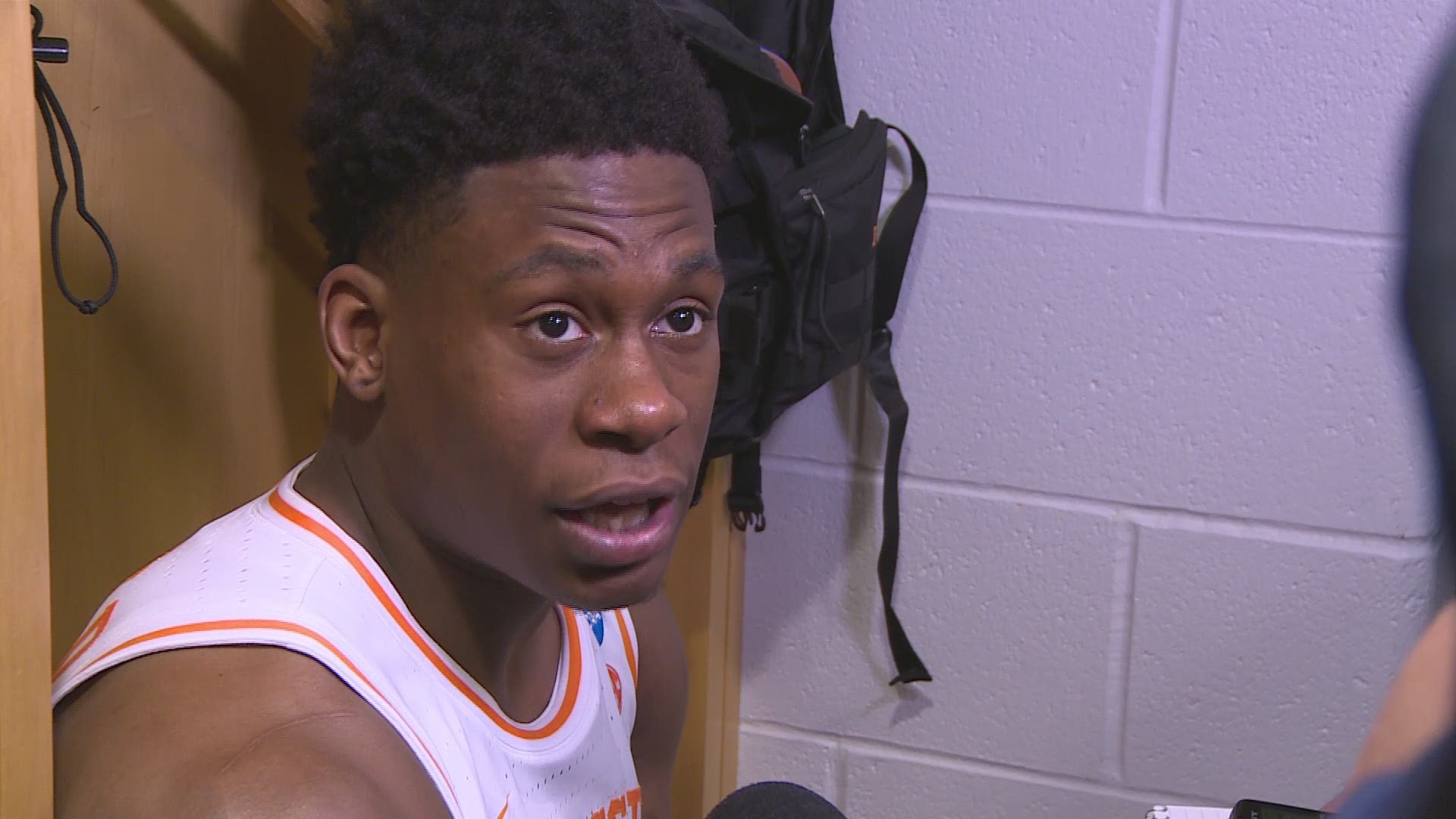 COLUMBUS, Ohio — In March, it’s all about surviving and advancing. Tennessee survived, now they advance, after a battle against No. 15 seed Colgate, 77-70.

Tennessee came out firing on all cylinders, starting off with a 9-0 run to set the tone against Colgate.

The first half was all about strong defense and guard play. Lamonte Turner and Jordan Bowden led the way with 10 points. Turner picked up right where he left off in the SEC Tournament.

Colgate continued to play well from outside, shooting 6/12 from three in the first half, but Tennessee banged around in the paint and capitalized off of Raider mistakes, taking a 12-point lead into the half.

The Raiders would not go quiet into the offseason. Colgate started the second half on an 11-5 run, hitting its first four shots from outside. Guard Jordan Burns was a flamethrower on offense, he finished with 32 points, making eight from three.

With about ten minutes left in the second half, Tennessee started to reassert itself, not with the bigs, but with the help of the guards. Jordan Bowden had a great drive, dancing his way between defenders and finishing with his left hand. He followed it with a steal and emphatic dunk on the other end.

In a game where Colgate dared someone not named Grant Williams to make a play, Jordan Bone, Jordan Bowden and Lamonte Turner answered the call. The three combined for 43 points.

With a one possession game and just a couple of minutes left, who made the big plays? None other than Admiral Schofield. Schofield hit back to back corner threes, to put the game away for the Vols. He led the team with 19 points.

With the win, Tennessee will advance to the Round of 32 for the second straight season. The team will face No. 10 seed Iowa on Sunday at 12:10 p.m. after the Hawkeyes beat No. 7 seed Cincinnati on Friday.

The Vols arrived in Columbus on Wednesday and practiced Thursday at at Nationwide Arena, the home of the NHL's Columbus Blue Jackets.

Tennessee is 2-0 in NCAA Tourney games in Columbus, beating Long Beach State and Virginia in the 2007 tournament.

RELATED: 'I got my Pal's, man' || Before the Big Dance, Vol Hoop's Fulkerson fills up with Frenchie Fries

Rick Barnes' squad is two wins away from tying the school record for total wins in a season.

"I think everyone that is in this tournament wants more. Whether that is how you are defined or not, it is what it is. The fact is that you are one of 64 teams that get to play in this tournament. And that by itself is not something you ever take for granted. I have said that every time that I have been in it. You never, ever take it for granted. Then when you get there, you want to win it."

Tennessee's deepest NCAA Tournament run in its history was a trip to the Elite Eight in 2010. The Vols have been to the Sweet 16 seven times. 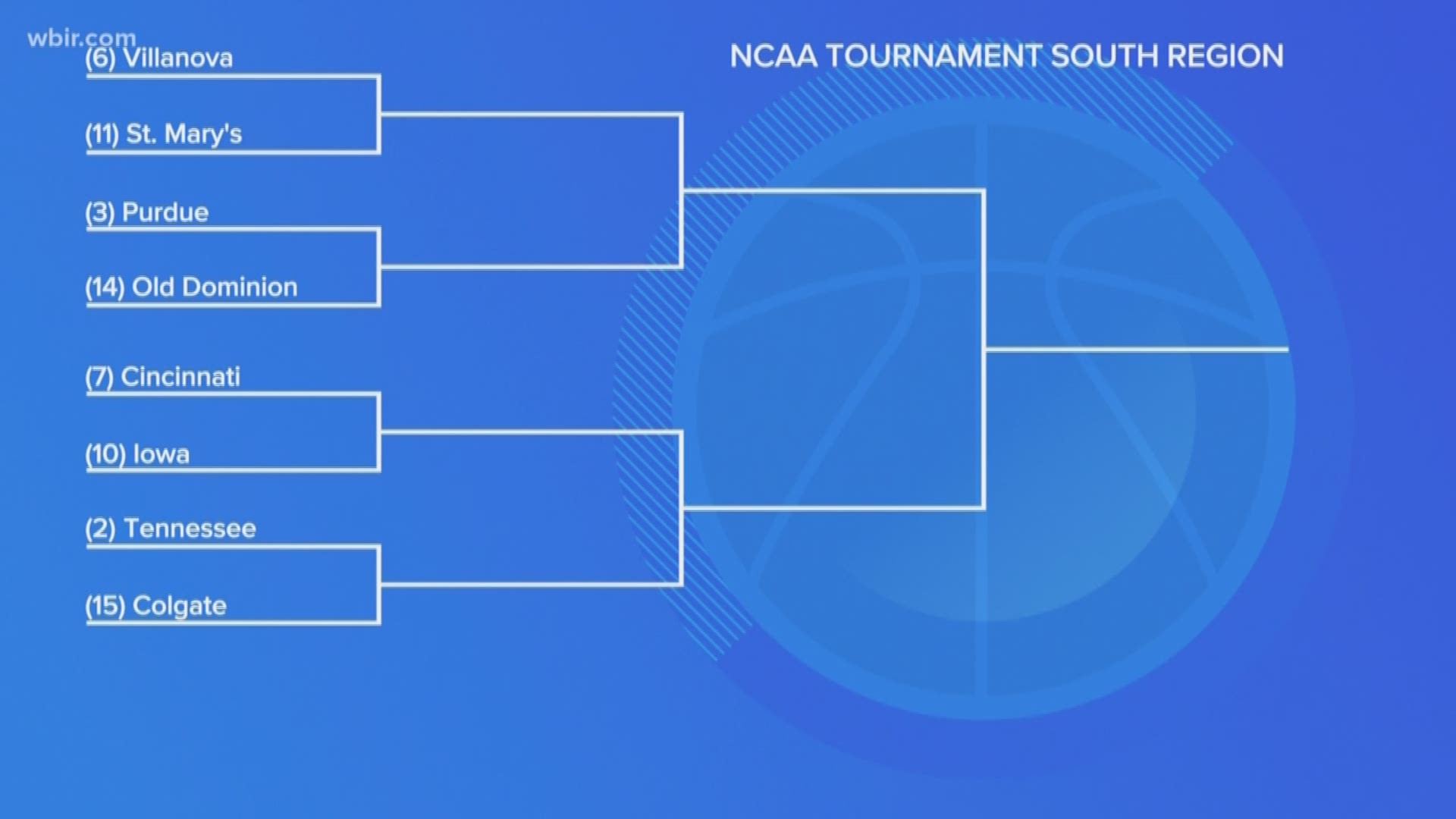 Tennessee's first task is getting past Patriot League champ Colgate. The Raiders are on a school record 11-game winning streak and in that span Colgate is a shooting a scorching hot 47.8 percent from three-point range.

"I mean they're good. You look at them, they're a skilled team, high percentage of shooting, and they've got great size. Across the front, they're as big as we are or bigger," Barnes said of Colgate.

"They're well coached, they run, they' re not afraid to push the ball, they run some ball screen stuff, they mix up their defenses, they show multiple zone defenses. They're just very skilled at every position. You would expect, whoever you're playing at this time of year, you've got to be ready to play. Believe me, they're going to be excited to play and we're going to be excited to play. It should be a good basketball game."

The Vols are one of seven teams chosen to be apart of "March Madness Confidential." A production crew will follow Tennessee throughout the tournament to give a behind the scenes look at the team's run.