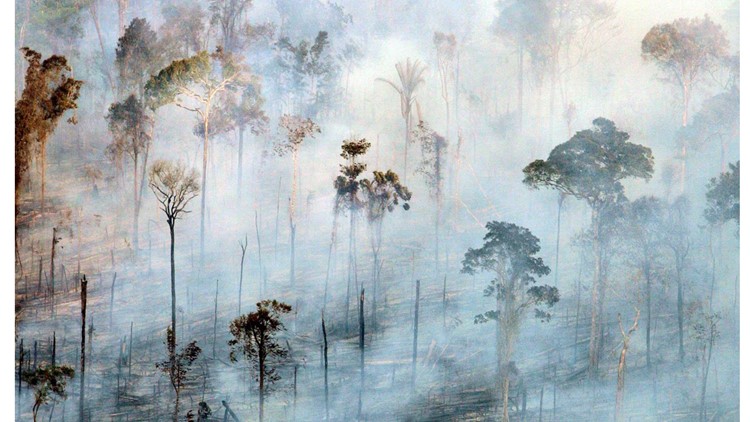 Outraged by pictures of the Amazon burning on social media? There are ways to help in real life

SÃO PAULO, Brazil — You’ve seen the photos - rainforests with a clean line of fire burning down the middle, the skies of Sao Paulo engulfed in heavy black smoke, clouds so vast you can see them from space.

It’s been two days since outrage about the Amazon rainforest fires spread across social media. You've probably seen a lot of posts like this the past few days.

Commonly called the “lungs of the planet”, the Amazon rainforest produces more than 20% of the world’s oxygen and absorbs over 2.2 billion tons of carbon dioxide per year.

Since the beginning of the year, Brazil has recorded over 76,000 fires across the country – and that marks an 84% increase over the same period in 2018.

Furthermore, according to Brazil’s National Institute for Space Research, last month the country saw a 278% rise in deforestation, spearheaded in part by Brazil's president.

So yes, the numbers and photos are frightening. It’s a problem that international leaders put pressure on Brazilian leaders to fix. French President Emmanuel Macron tweeted:

US President Donald Trump also tweeted about the situation:

In response to that international pressure, some 44,000 troops will be available for 'unprecedented' operations to put out the fires.

So what can you - in the face of an unprecedented fire and is 3,119 miles away from you - do to help these so-called "earth lungs"  that are statistically responsible for one in every five of the breaths you take?

Well, a lot it turns out.

And so, from one environmentally imperfect human to another, here's what we all can do to try and help out

1. Get behind an organization that speaks to you.

If ditching your 9-5 to live a life dedicated environmental activism seems daunting, give resources to the people who have done that!

There are hundreds of people on the ground in Brazil and other countries dedicated to preserving that natural resource and protecting the species found within it.

Just be wary of pop-up online fundraisers with no specific organization behind them. If you are going to dedicate your money to the cause, triple-check that it is actually going to the people on the ground, not a stranger's pocket.

2. Ditch beef - and fast food in general - every once in a while.

In 2017, a report by campaign group Mighty Earth said Burger King has been buying animal feed produced in soy plantations that had been made burning large swaths of Brazilian and Bolivian forest.

But environmentalists have had beef with the meat industry since the 1990s. Research shows most of these fires are started by cattle rangers and loggers to keep up with the world's demands for meat and beef.

Data from the Institute of Environmental Research in Amazonia (IPAM) shows that the top 10 cities in Amazonia with the most fire occurrences also had the biggest deforestation rates this year.

3. And keep track of your palm oil intake also.

This stuff is in practically everything - ice cream, frozen pizza, make-up, soap, detergent, candles, etc. While we enjoy all of these commodities in some form or fashion, studies have been conflicting for years over palm oil as a more environmentally friendly option that could also be causing serious damage to the rainforests it is produced from.

Regardless, we come in contact with palm oil every day so it is up to us to be conscious about

Luckily, there's an app for that! The World Wildlife Foundation created an app that lets you scan a product's barcode and shows you how ethical, sustainable or healthy it is with badges.

There are many petitions circulating online. Some with millions of signatures. Sometimes just making your voice heard can make a difference.

RELATED: From Blackburn to Burchett, here's how to contact your local representatives in Congress

You can also contact corporations or take your business to more sustainable producers.

5. Take steps to be a tree-hugging consumer.

Look for the Rainforest Alliance Certified seal on products.

Use the resources listed above or simply do your research on the products you buy most often.

Consider walking, carpooling or investing in a more energy-efficient car if you are able.

Look, the Amazon Rainforest is almost 3,500 miles away, and the magnitude of the fire is overwhelming.

No, the simple act of picking up your phone will not make the fires extinguish in a snap, but it is better than letting this disaster be another social media trend that fades in a few days.