'I was petrified' | Students ride out EF-0 tornado on school bus, rushed to safety by school leaders

Only minor injuries were reported after the tornado touched down near Pleasant Hill Elementary. 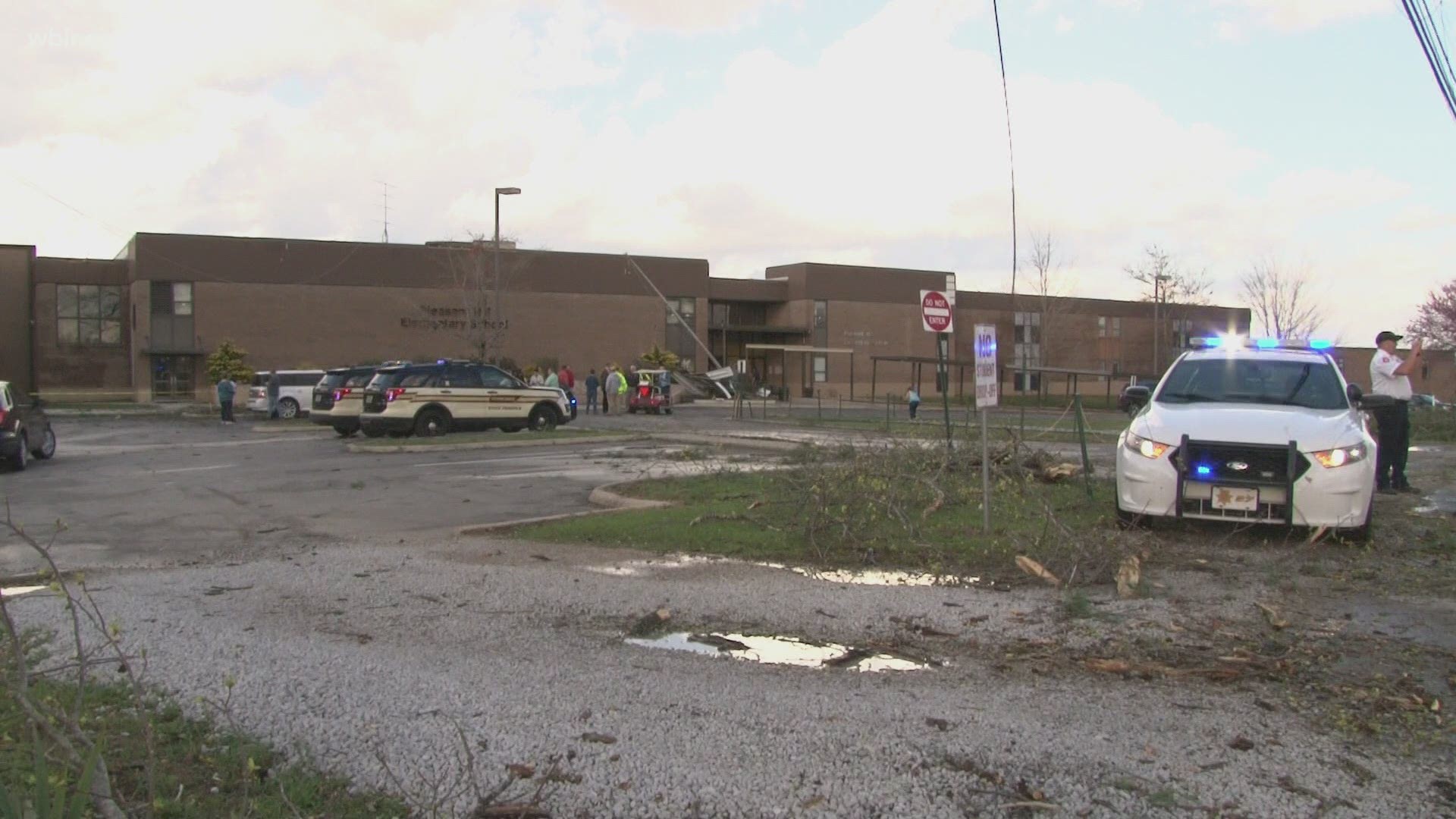 CUMBERLAND COUNTY, Tenn — Anthony Justice, a School Resource Officer at Pleasant Hill Elementary, said that he was directing traffic when he heard something and turned around. He said he saw a tornado and started screaming as it tore metal off the building across the road from where he was.

"I had a bunch of kids over here in the right-hand parking lot," he said. "I started screaming at them and all my buses were loaded, I couldn't get the kids off the school buses so they had to ride through it ... It was terrifying, that's for sure."

He stopped one school bus from leaving the parking lot and driving into the tornado's path. Zack Heylek, 15, said he was on board. 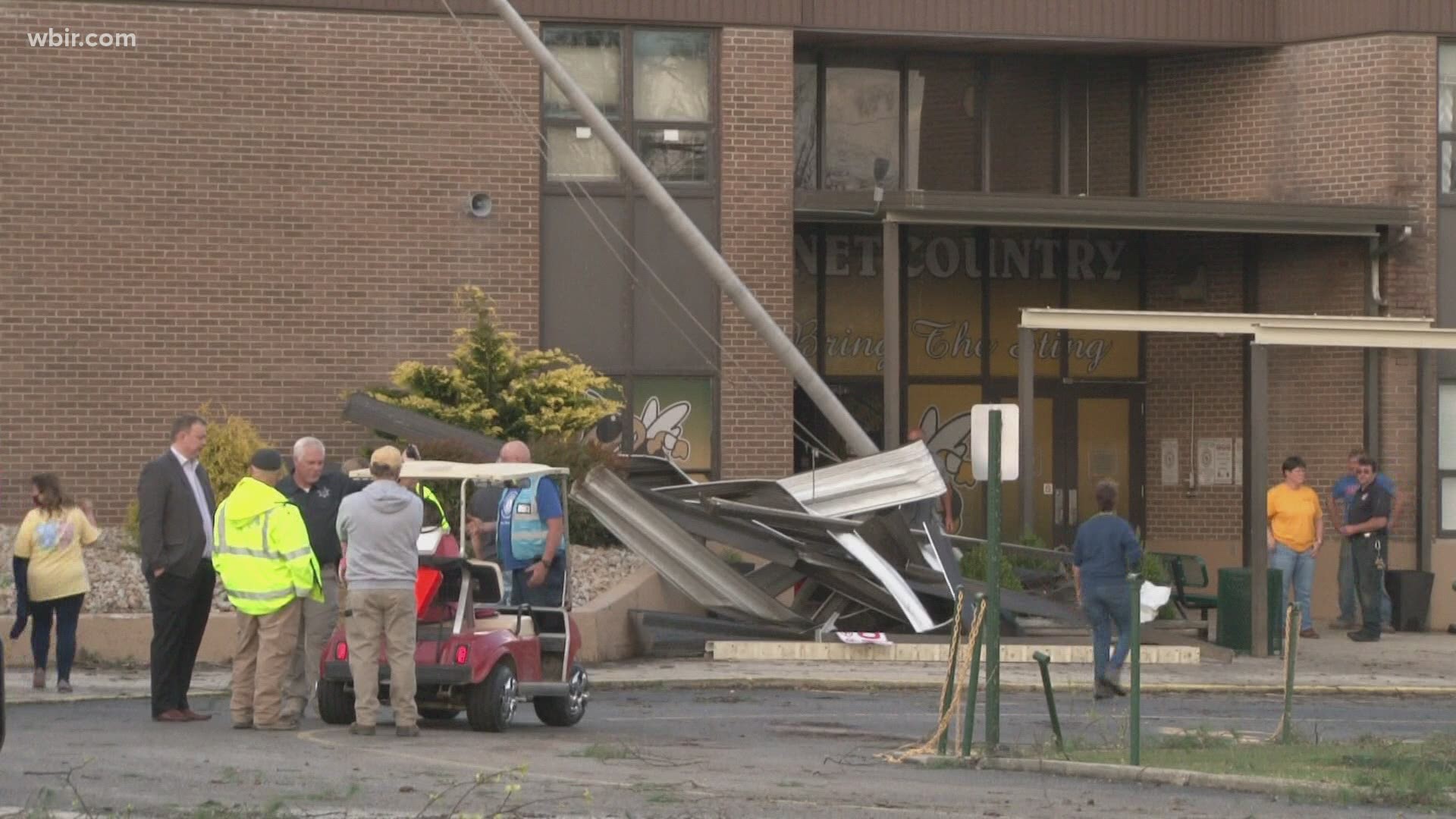 "Right before it started, the SRO flagged us all down ... the bus driver, as soon as it hit, told us all to get down," Heylek said. "Right before I got down, I saw debris flying all over."

For the students on board, it was a scary experience. None of them knew what was going to happen.

"The bus was shaking when the storm came in," 7-year-old Jaycee Watson said. "We saw branches flying everywhere and then had to go down."

Heylek said he was worried too.

The National Weather Service in Nashville said it believes an EF-0 tornado touched down near Pleasant Hill Elementary School on Thursday. That will need to be confirmed by crews that travel to the area.

"Buildings can be replaced, rooms can be redecorated, but we are very thankful that the situation was not any worse," Cumberland County director of schools Ina Maxwell said.

The Cumberland County Sheriff's Office said the severe weather hit about 3:15 p.m. local time. Emergency crews reported minor injuries from the storm. No one was taken to the hospital.

Casey Cox, the sheriff of Cumberland County, said that most of the damage was in the area around the school. He said the roof had serious damage, and that the storm pulled window frames and other things out of the school. He said some homes also reported minor damage, behind the area.

"We were very lucky and blessed that there were very minimal injuries to our children," Cox said.

Parents were extremely thankful too.

"Thank goodness these teachers were so responsive to help these kids," parent Jennifer Heylek said. "If not, these kids would have been in the middle of it headed home ... I was petrified."

Because of the storms, Cumberland County Schools will be closed Friday.

"Emergency Management Agency requests that everyone avoid the area to allow emergency personnel to continue their work. If additional information becomes available additional releases will be made," the Sheriff's office said in a release Thursday.

Authorities were asking people to avoid the area.

The storm was part of a series of cells that broke out Thursday afternoon from the Plateau. Moving tornado warnings were issued starting about 5:30 p.m. for parts of Cumberland, Fentress, Morgan, Scott, Campbell and Claiborne counties.

High winds, scattered hail and some damage were reported as the cells moved through the area.