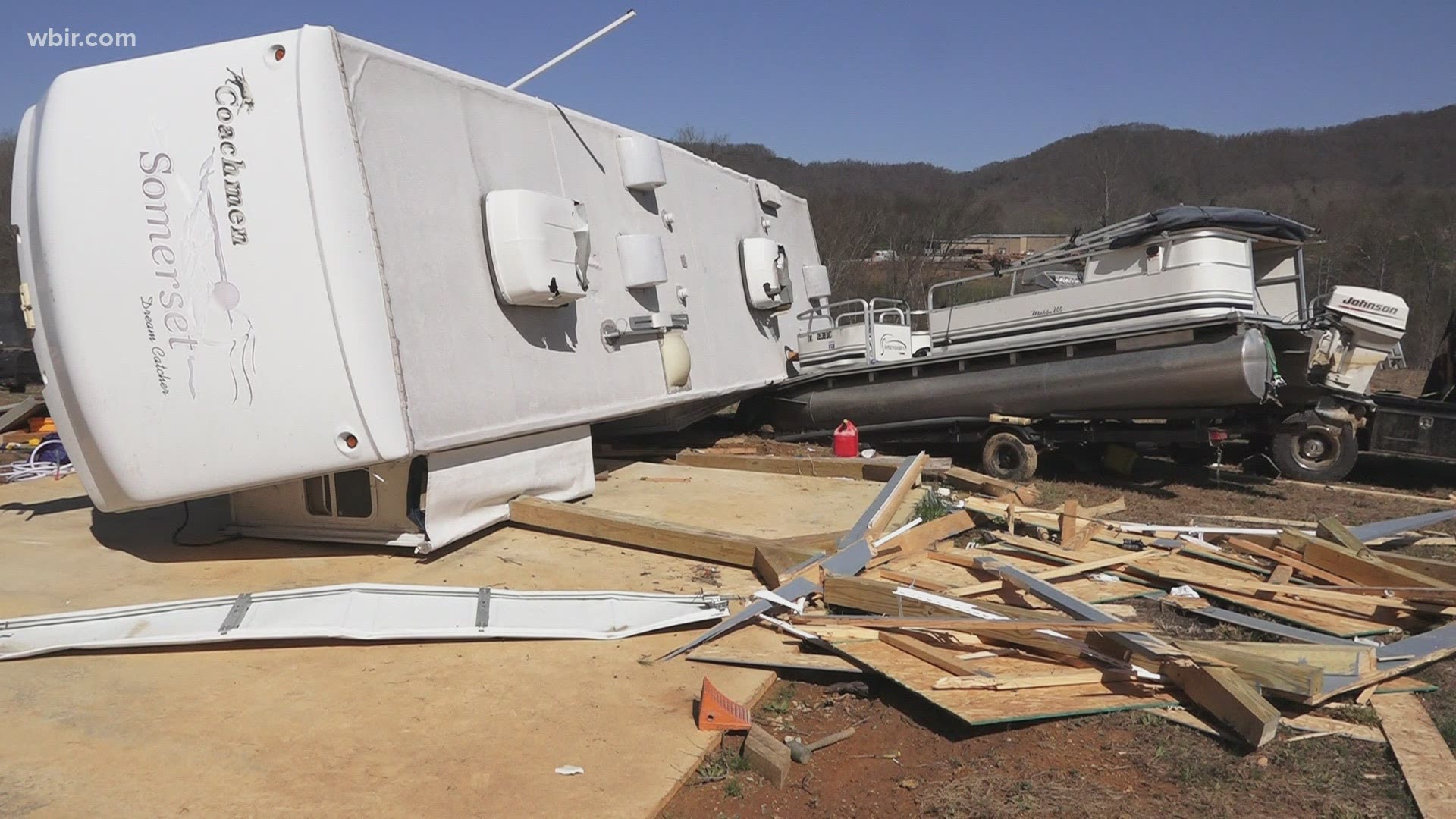 An NWS meteorologist who surveyed the damage Friday morning said he believed the tornado had maximum winds of 115 to 120 mph and the tornado was about 200 yards wide.

There was some property damage from the storm, but no serious injuries have been reported.

Some residents said the storm came up so quickly, they barely had time to get inside.

"I thought, oh I better get back in the house when the wind started jerking me back and I had to wrap my arms around this last pole and held on," said Freeda Goad, demonstrating how she struggled against the strong winds to get back inside her home.

The community is cleaning up the damage today.

Plateau Electric Cooperative has crews in the area repairing damaged power poles to restore electricity to the area.

It is the second confirmed tornado for East Tennessee on Friday night. The NWS believes an EF-0 tornado struck near Pleasant Hill Elementary School in Cumberland County a few hours earlier. The tornado hit just as students were being dismissed for the day, but the SRO and other school staff members quickly got the students to safety.

Only minor injuries were reported.

RELATED: 'I was petrified' | Students ride out EF-0 tornado on school bus, rushed to safety by school leaders

UPDATE (5 a.m.) The National Weather Service will be in Scott County surveying damage from severe storms.

No injuries have been reported, officials said.

There are no confirmed reports of tornadoes in Scott County but there was damage. It's up to meteorologists with the NWS to examine the damage and determine if a tornado occurred and if so, how large it was.

UPDATE (11 p.m.): The Scott County Sheriff's Office said that deputies were on the ground in damaged areas, including the Straight Fork and Normal communities. No injuries were reported due to the storm, officials said.

"We appreciate the calls from agencies all over our area that have offered assistance," Sheriff Ronnie Phillips said. "We are thankful and blessed to have such a community of help and volunteers, as well as, public service workers. We are also blessed and thankful to have no report of serious injuries. We can and will rebuild and cleanup, in time, with all of us working together. There's no place or people I'd rather have standing with us during this time than the fine people of Scott County. We ask you to hold up in prayer these families affected tonight and in the days to come."

Storms tore through East Tennessee Thursday evening, bringing hail, winds and some tornadoes. Some buildings were damaged as a result of the storms.

The National Weather Service believes an EF-0 tornado was reported near Pleasant Hill Elementary School, and officials said that there was damage reported to the school's gym. The school was out, but students still in the building did take shelter.

The storm also tore a hole in the roof of a building near the school, according to reports.

Officials said that emergency crews were sent to the area around Pleasant Hill Elementary at around 3:17 p.m. They said only minor injuries were reported and no one was transported due to injuries. The school, the Fletcher House and the Community House were damaged.

All students and faculty were accounted for, officials said. They announced that Cumberland Count Schools would be closed Friday after the storm.

Dispatchers said that trees were down in Morgan County, but no other damage was reported as of 7 p.m. Most of the downed trees were in northwest areas of the county, near the Sunbright area, according to reports.

Reports were also received of damage in Scott County around 7 p.m. State Park Road and Norma Road was closed as crews cut through downed trees. The National Weather Service also said that they received reports of homes that were destroyed in the Norma area around 7:30 p.m.

The Scott County Sheriff's Office asked people to avoid Norma Road and Straightfork Road as responders worked to get access to homes in those areas.

This story will be updated as more information about the damage is available. 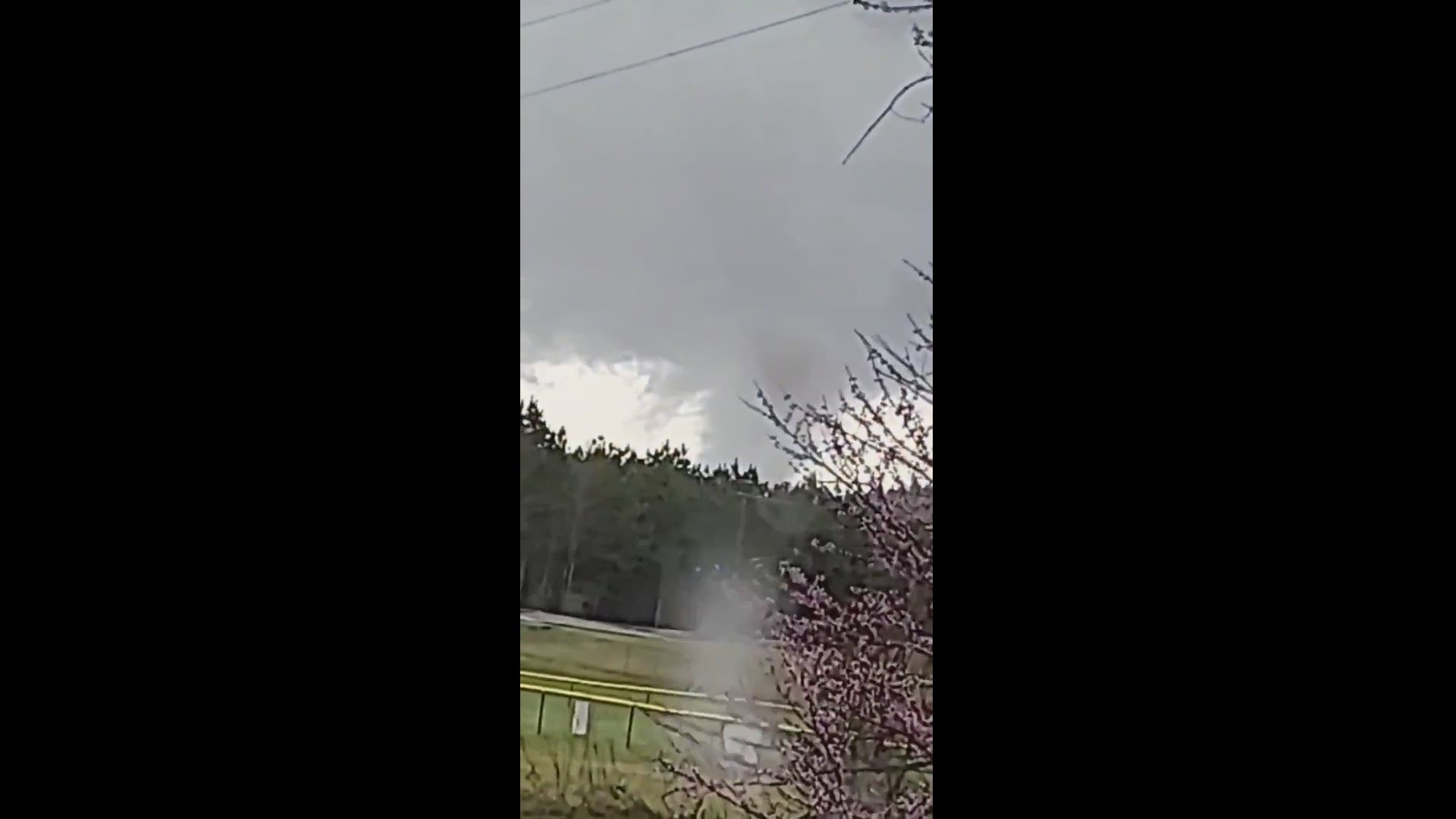