More than 3" of rain has fallen in some locations. The National Weather Service reported water-covered roads and law enforcement say they received calls of vehicles stranded in high water overnight. 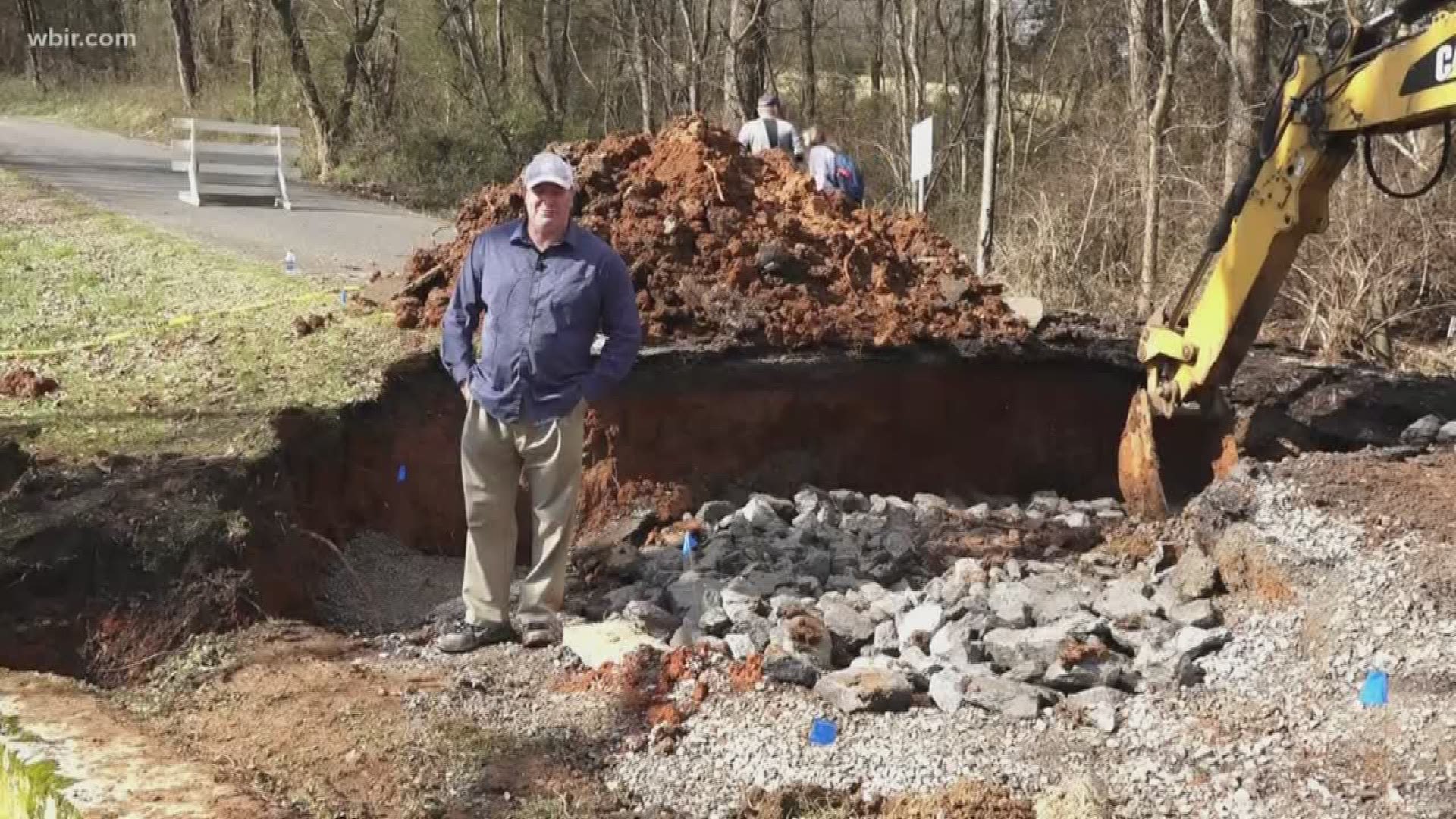 A person had to be rescued after their vehicle became stranded in floodwaters in North Knox County Wednesday night.

More than 3 inches of rain fell in some locations, causing roadways to quickly become flooded and stranding some motorists in high water.

A Flood Watch is in effect for southern Kentucky until noon Thursday.

Flooding and storms also caused damage across Middle Tennessee. One woman was killed after being swept away, and many others were trapped in flood waters.

RELATED: Woman killed after being swept away in flood waters in Cheatham County

A sinkhole had opened up on Robin Circle in Morristown by early Thursday morning. In addition to flooding caused by rainfall, there was also a water main break crews were working overnight to try to fix, Hamblen County dispatchers said.

About 30 homes were affected, as residents could not come or go due to the hole.

Authorities did not have an estimate of when it would be fixed as of 7 a.m. Thursday morning.

Major roads in Hamblen County had been cleared early Thursday morning, Hamblen Co. dispatchers said. The real concern for authorities Thursday were back roads and neighborhoods where there could be lots of standing water.

SR 66 was closed near the Hancock/Hawkins County line due to a landslide. Crews were on site while traffic was being diverted from the area.

Credit: TDOT
SR 66 was closed near the Hancock/Hawkins County line due to a landslide. Crews were on site while traffic was being diverted from the area.

TDOT spokesman Mark Nagi said geotechnical engineers were currently assessing what caused the landslide, but the expectation was that it was caused by the heavy rainfall. The closure will be long-term, Nagi said.

TDOT shared the following as suggested detour routes around the closure:

SR 116 between Indian Fork Lane and Bunch Cemetery in Anderson County has reopened. A temporary traffic signal is in play as crews repair a slide caused by flooding.

Another landslide also occurred on SR 116 in Anderson County, closing part of the road between Indian Fork Lane and Bunch Cemetery, Nagi tweeted.

Highway 27 in Glenmary, near the Scott and Morgan County line, is closed due to flooding. Authorities were rerouting traffic onto Nydeck Trail and S.R. 52 by way of the Brewstertown community in northern Morgan County, according to the Independent Herald.

The Scott County Sheriff's Office shared video of the flooding in the Glenmary area early on Thursday.

The Knox County Sheriff's Office said it sent units to vehicles stranded in high water at Heiskell/East Raccoon Valley Road on Wednesday night -- asking for people to avoid the area until waters recede overnight. Emergency crews had to rescue at least one person after their vehicle submerged.

The Tennessee Department of Transportation reported to the National Weather Service that parts of State Route 121 in Knox County had become impassible due to flooding Wednesday.

People in Northeast Anderson County near the Andersonville area reported heavy flooding in their neighborhoods, with water rising up driveways to peoples' porches Wednesday night.

Flooded roads and water levels may continue to rise after the rain ends before receding overnight. Remember: Turn around, don't drown. If you encounter flood-submerged roads, do not risk driving across it. The National Weather Service says the majority of flood-related deaths occur inside the car when people attempt to drive over flooded roads.