Iota could wreak havoc in Central America, where people are still grappling with more than 120 deaths and many more missing in the aftermath of Hurricane Eta. 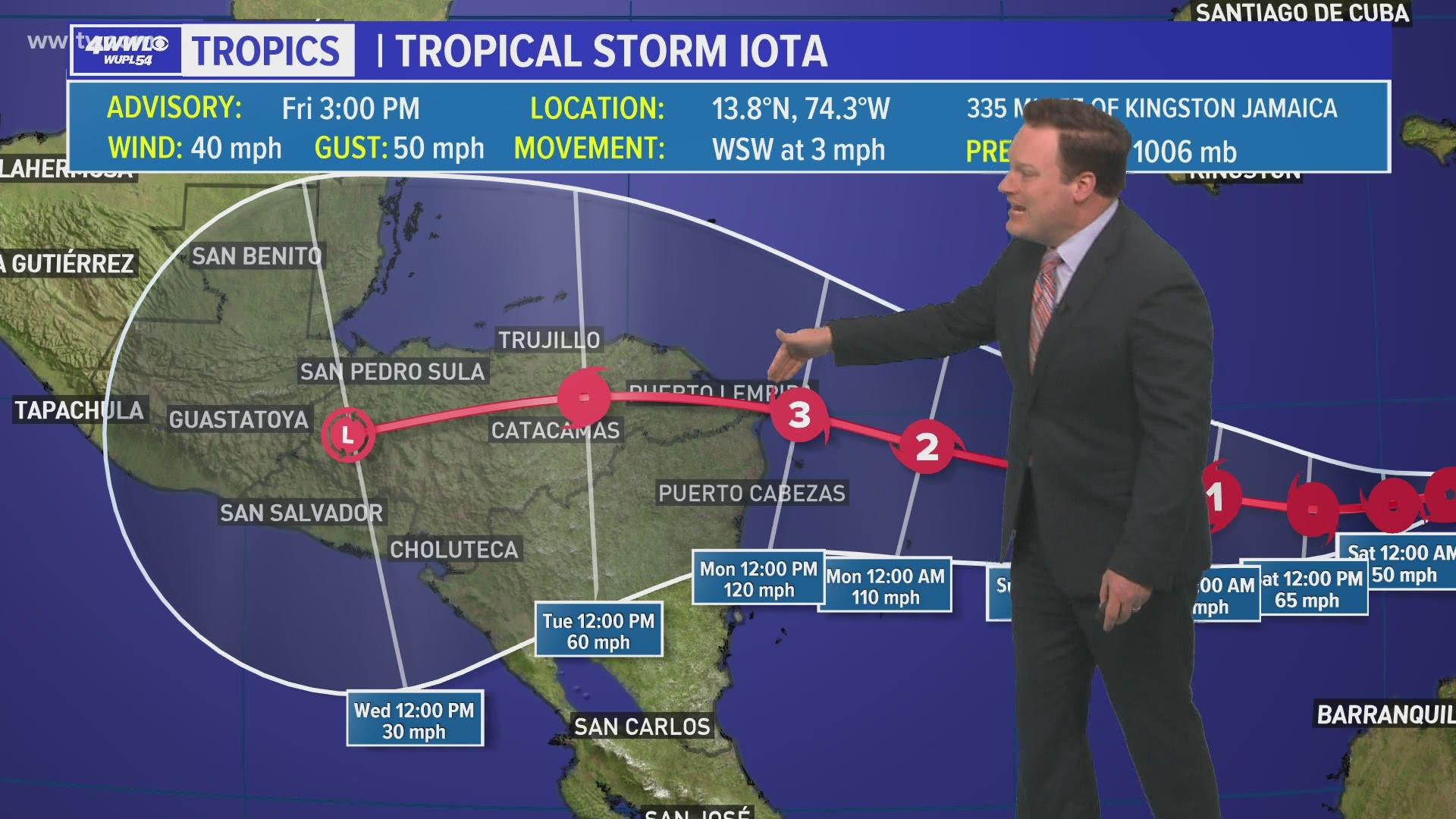 ST. PETERSBURG, Fla. — Just as the remnants of Eta finally blew out to sea on Friday, another storm formed that could follow its path of death and destruction into Central America this weekend.

Hurricane experts were closely watching the Caribbean, where Tropical Storm Iota formed Friday afternoon. Forecasters warned that Iota could power up quickly, to major hurricane strength, as it approaches Central America late Sunday or Monday, and wreak more havoc in a region where people are still grappling with the aftermath of Eta.

The National Hurricane Center in Miami said Iota could bring dangerous wind, storm surge and as much as 30 inches (76 centimeters) of rainfall to northern Nicaragua and Honduras. The storm was located about 335 miles (540 kilometers) south-southeast of Kingston, Jamaica and had maximum sustained winds of 40 mph (65 kph). There were no coastal warnings or watches in effect as of Friday afternoon.

In terms of Eta, forecasters said its remnants would pick up forward speed in the next day or so as it pulls away from the Southeast seaboard. Eta also triggered flash flooding, water rescues and at least one bridge collapse in South Carolina, said Sandy LaCorte, a meteorologist with the National Weather Service in Greenville, South Carolina.

Eta hit Nicaragua last week as a Category 4 hurricane, killing at least 120 people as torrential rains brought flash floods and landslides to parts of Central America and Mexico. Then it meandered across Cuba, the Florida Keys and around the Gulf of Mexico before slogging ashore again near Cedar Key, Florida, and dashing across Florida and the Carolinas.

The Tampa Bay area was buffeted with gusty winds and rain, and there was one U.S. death linked to Eta: In Bradenton Beach, Mark Mixon stepped into his flooded garage as he was laying sandbags around his home Wednesday evening and was electrocuted, said Jacob Saur, director of public safety for Manatee County.

Earlier, firefighters in Tampa had to rescue around a dozen people who got stuck in storm surge flooding on a boulevard adjacent to the bay. Some vehicles remained on the roadway Thursday. Isolated neighborhoods also experienced enough flooding to evacuate.

Credit: AP
A street sign is damaged in the aftermath of Tropical Storm Eta, Thursday, Nov. 12, 2020, in the Passe-A-Grille neighborhood of St. Pete Beach, Fla. Eta dumped torrents of blustery rain on Florida's west coast as it slogged over the state before making landfall near Cedar Key, Fla. (AP Photo/Lynne Sladky)

Several sailboats broke free from their moorings and washed ashore in Gulfport, Florida, including the vessel where Mo Taggart has lived for two years with her dog. She thinks the boat is a total loss.

Eta was the 28th named storm of this year's hurricane season, tying the 2005 record for named storms. Theta, the 29th, was centered Friday south-southeast of the Azores, and moving east with top sustained winds of 60 mph (95 kph).

This story has been corrected. The meteorologist's name is Sandy LaCorte, not LaCourte.