One man killed, another hospitalized after mudslide swept their cars 200 feet down an embankment 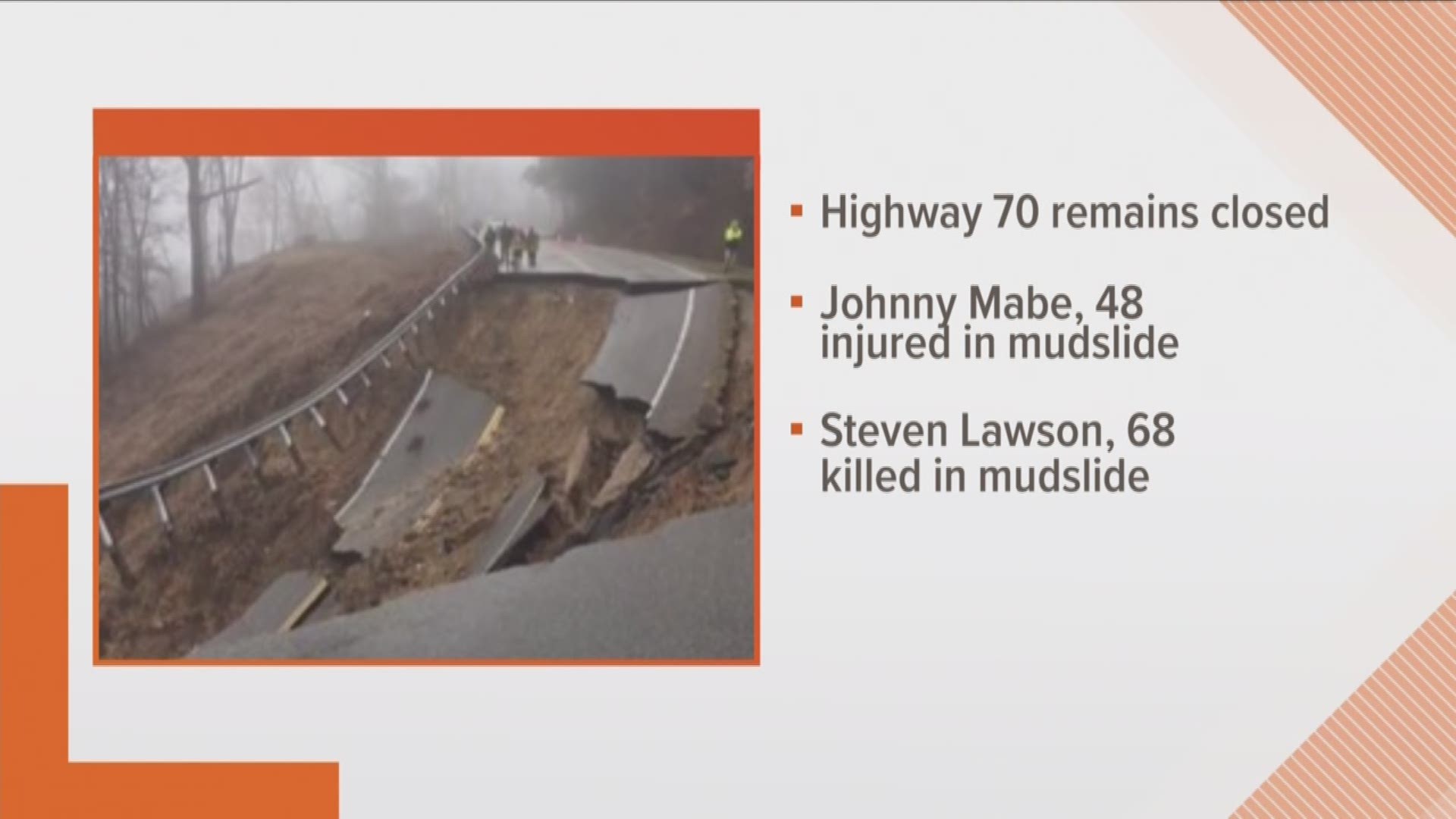 HAWKINS COUNTY, Tenn. — Update (8:15 a.m. 2/22/19): A man from Eidson, Tennessee, was injured in a major mudslide that killed a 62-year-old Jonesborough man and completely washed away portions of a road early Thursday morning, according to a preliminary report from the Tennessee Highway Patrol.

Steven Lawson, of Jonesborough, was killed while driving his 1997 Chevy pick-up truck around 1:55 a.m. when the mudslide occurred. He was traveling south when the roadway began washing away, a separate THP report said.

Commissioner Clay Bright, along with other TDOT staff, and state and local officials, toured the slide Friday morning.

“We first want to express our deepest condolences to the family and friends of the man who lost his life early Thursday morning,” Bright said. “TDOT staff is working around the clock to develop a set of design plans to address this large slide. We plan to have an emergency contract in place by the end of next week, and will make every effort to reopen Highway 70 North as quickly as we can safely do so.”

Update (6 p.m. 2/21/19): The Tennessee Department of Transportation has released detour routes drivers can use as Highway 70 North will remain closed for the long-term after a major mudslide killed a 62-year-old Jonesborough man and completely washed away portions of the road early Thursday morning.

Detour routes are as follows:

From SR 70 in Rogersville:

According to a Tennessee Highway Patrol report, Steven Lawson, of Jonesborough, was driving his 1997 Chevy pick-up truck around 1:55 a.m. when the mudslide occurred. He was traveling south when the roadway began washing away.

His truck rolled 200 feet down an embankment and he died due to injuries he got in the crash, the THP report said.

The road has been closed since.

Update (10:20 a.m. 2/21/19): Tennessee Department of Transportation Mark Nagi has provided a more detailed look at the damage to the section of road affected by a major mudslide that occurred overnight Thursday and sent one to the hospital. 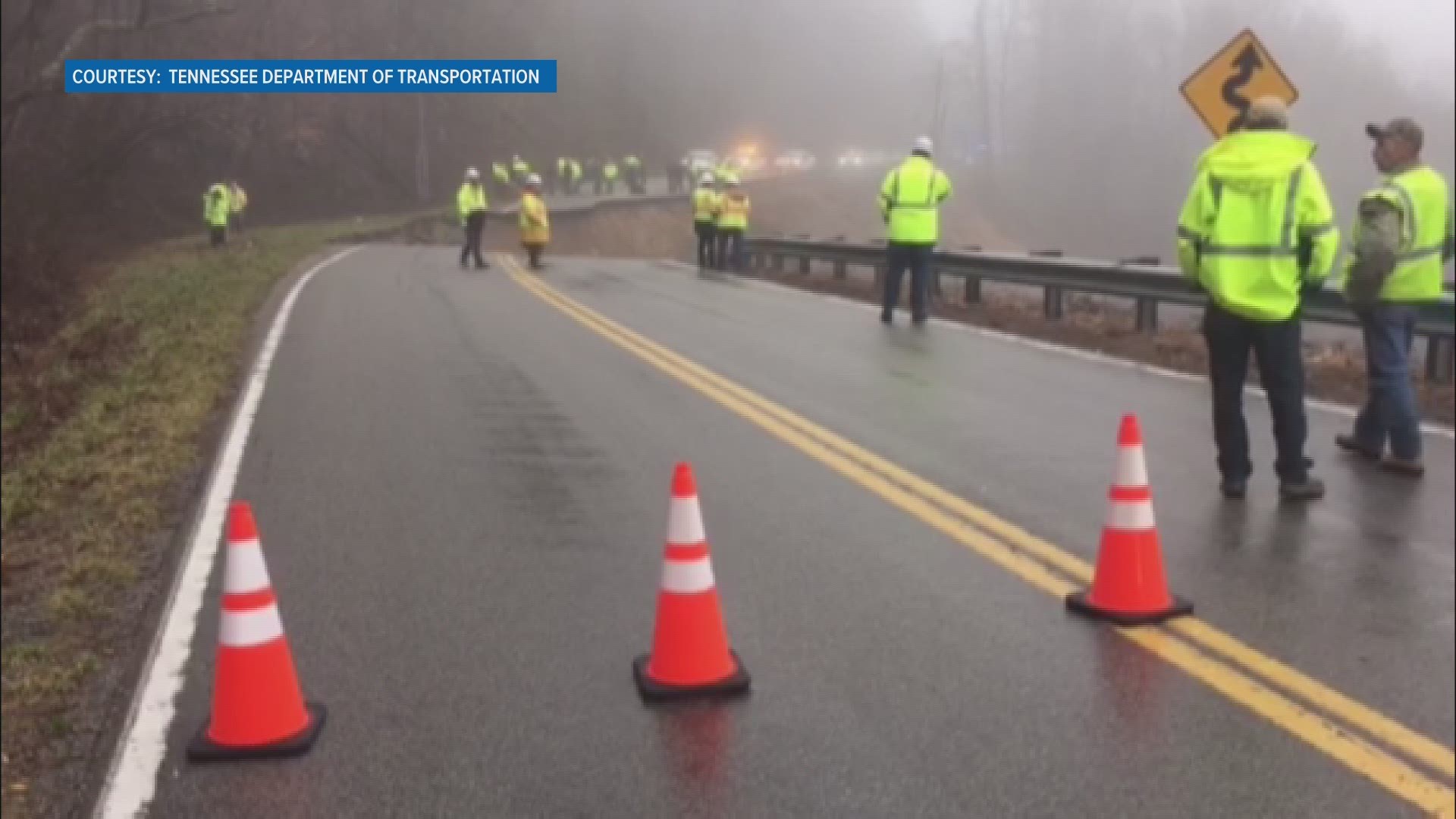 He said in a tweet that TDOT geo-technical engineers are assessing the slope and that the road will be closed for the long-term.

A more detailed look at the damage from the mudslide in Hawkins Co.

The slope was still considered unstable as of 5 p.m. Thursday.

Update (7:20 a.m. 2/21/19): Tennessee Department of Transportation Mark Nagi has provided a first look at the level of damage to the section of road affected, which appears to be almost completely washed away.

The entire road is closed between Cave Springs Road and Clinch Valley Road.

"While en route to the scene, we received information from the Hawkins County Sheriff’s Office deputy who was on scene, that we had a major landslide. In that landslide, there were two vehicles, possibly more,” he said.

Several people in homes along the highway in the area have been asked by EMS to evacuate, Stewart said.

"It was a voluntary evacuation," he said. "Some of the families left, there were a few, I think one, that was a good distance away from it, they went to them to make sure they knew there was an issue with the road and offered them a way out, but they refused."

He said he was only familiar with one active rescue, in which a male patient was taken to Holston Valley Medical Center by Hawkins County EMS.

"It was an emergency transfer, so they did go lights and sirens from the scene,” Stewart told reporters during the press conference. "They did advise he was stable with the last update that I had.”

He said this is only the third landslide he has responded to since he started in 1994, and the only one at all that had someone who was injured that he could remember.

"Every other time we’ve been blessed, the Lord’s looked out over the ones on the roadway," he said. "We’ve not had any injuries or anything other than just the road being closed.”

Additional emergency responders were en route to the scene including Sullivan County EMA, Washington County EMS and Emergency Rescue Squad and the Kingsport Life Saving Crew, according to Stewart.

The scene is still active, what he describes as fluid.

"Every time we think the mountain’s going to stop, it continues to move,” Stewart said.

He asked people in the area to check on their neighbors, especially if they haven't seen anyone in a few days and remember to avoid driving through any floodwaters as rain continues to batter East Tennessee.

"We have been overwhelmed this year, as far as Hawkins County Rescue Squad, with a number of calls for service that we have had for water getting into people’s homes and them getting trapped or people in vehicles," he said. "It’s seemed to be much deeper. It doesn’t look like we’ve got any hope in sight with the rain continuing.”

Update (7:00 a.m. 2/21/19): The mudslide occurred approximately one mile from where a large rockslide in 2017 caused $181,000 in damages on a section of road between SR 94 and Clinch Valley Road, Tennessee Department of Transportation Mark Nagi confirmed.

Update (6:30 a.m. 2/21/19): Highway 70 is also blocked with downed trees and power lines on one side of Clinch Mountain, Hawkins County Sheriff Ronnie Lawson said in a tweet.

He said it was a "very dangerous situation."

The mudslide was occurring on the other side of the mountain and affecting Highway 70 North. At least two vehicles were involved and one person was taken to the hospital.

10News has a crew live at the scene and will continue to provide any new updates we receive.

Update (5:40 a.m. 2/21/19): Emergency responders are standing by at the scene until daylight as mud continues to slide in the area, Hawkins County Sheriff Ronnie Lawson said in a tweet.

Once day breaks, responders will go in and see what the damage is on the scene and search for any additional victims.

10News has a crew live at the scene and will continue to provide any new updates we receive.

Hawkins County Sheriff Ronnie Lawson said in a tweet the ongoing mudslides in the area were "huge."

TDOT cited Tennessee Highway Patrol in its reports the entire road is closed between Cave Springs Road and Clinch Valley Road. The mudslide washed away the road, dispatch said. TDOT's report said it is not estimated to be clear until 3:00 p.m. next Monday.

At least two vehicles were involved in the landslide, and crews were working to get them out around 2:45 a.m. Thursday, according to Hawkins County dispatch.

HCEMS took at least one person form the scene, according to Hawkins County Sheriff Ronnie Lawson. Hawkins County dispatch did not know anything about the severity of injuries.

10News will update this story as we get more information.