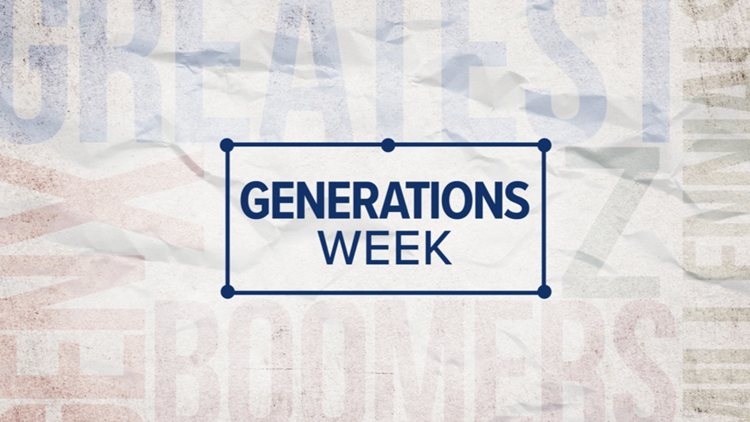 Photo by: Tegna
Breaking down all of the stereotypes, trends and biggest moment of each living generation.

Generation X is commonly known as the "forgotten generation," but social scientists say Gen Xers are not forgotten there are just fewer of them.

"There's a decline in fertility. From 1965 to 1980, that generation, there are fewer. Fertility is lower so this is where the emergence of Gen X comes," Dr. Tricia Bruce, Sociologist with the University of Notre Dame, said.

People in Generation X saw major changes during their coming of age.

"I think that we are that in between generation bridging the gap between Millennials and Boomers and The Greatest Generation," Gen Xer Charles said.

Generation X is also known as the "latchkey generation" because many of their parents worked, and they were expected to care for themselves after school.

As they grew up, they became known as cynics and slackers.

"When I was growing up, I had this illusion that when I got older I was going to get the house, the great job," Gen Xer Tim said.

A report by Franklin Templeton Investments shows Generation X is stressed over heavier work loads, paying the bills and being passed over by Millennials for promotions.

CNBC reports that between 2013 and 2017 Gen Xers averaged 1.2 promotions while Millennials averaged 1.6.

"Many in my generation have really gone above and beyond as far as innovation, new ideas, technology, businesses," Charles said.

Generation X saw major changes in technology as they grew up. More families got multiple TVs in their homes, MTV was founded in 1981 and computers started to become popular.

"Gen X was a generation that came of age during the rise and the proliferation of computers," Dr. Bruce said.

"We had a computer class in elementary school, " Charles said. "We were working on the Apple IIs at that point and still using the floppy disks."

As computers became more popular, so did the debate about screen time.

"Screen time meant something different then than it does now, but it was equally problematized," Dr. Bruce said.

Some claim Generation X is more addicted to screens than younger generations.

So where did the term Generation X come from?

"The name itself actually emerged from a novel, a Douglas Coupland novel called 'Generation,'" Dr. Bruce said. "There's not a clear, popular linkage as far as why that label is even there."

But when it comes to the media,  Generation X is still forgotten.

A national news segment went viral after it left Gen X off a list of generations. Gen Xers came out in full force on social media to remind the world they exist.