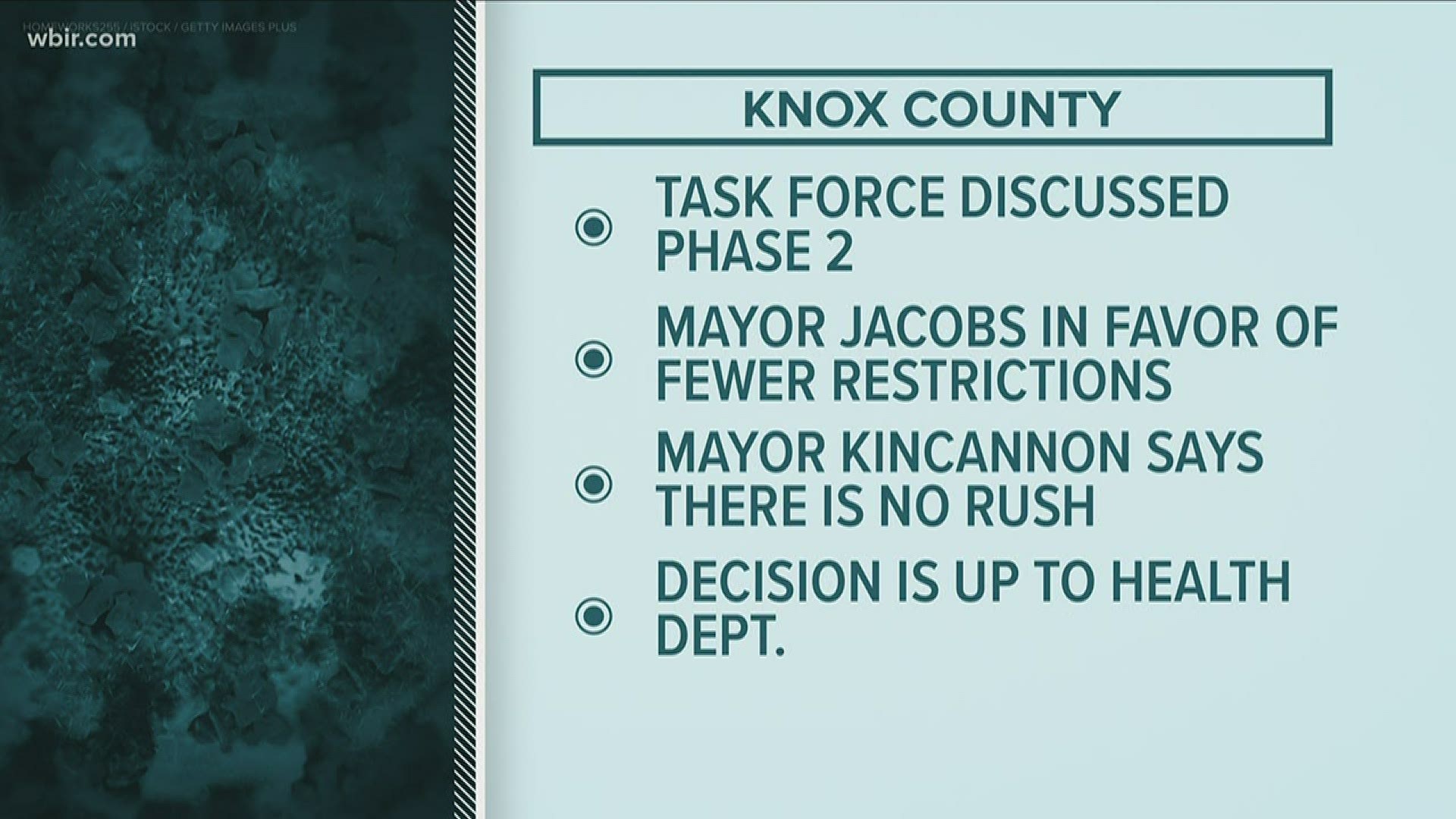 The county currently is operating under "phase one" guidelines that remain in effect through May 28. They include requirements such as making restaurants use only 50 percent of their seating.

Gov. Bill Lee, however, has signaled he's ready to ease restrictions on businesses such as restaurants starting Friday in most counties, including all those that surround Knox County but not Knox itself. 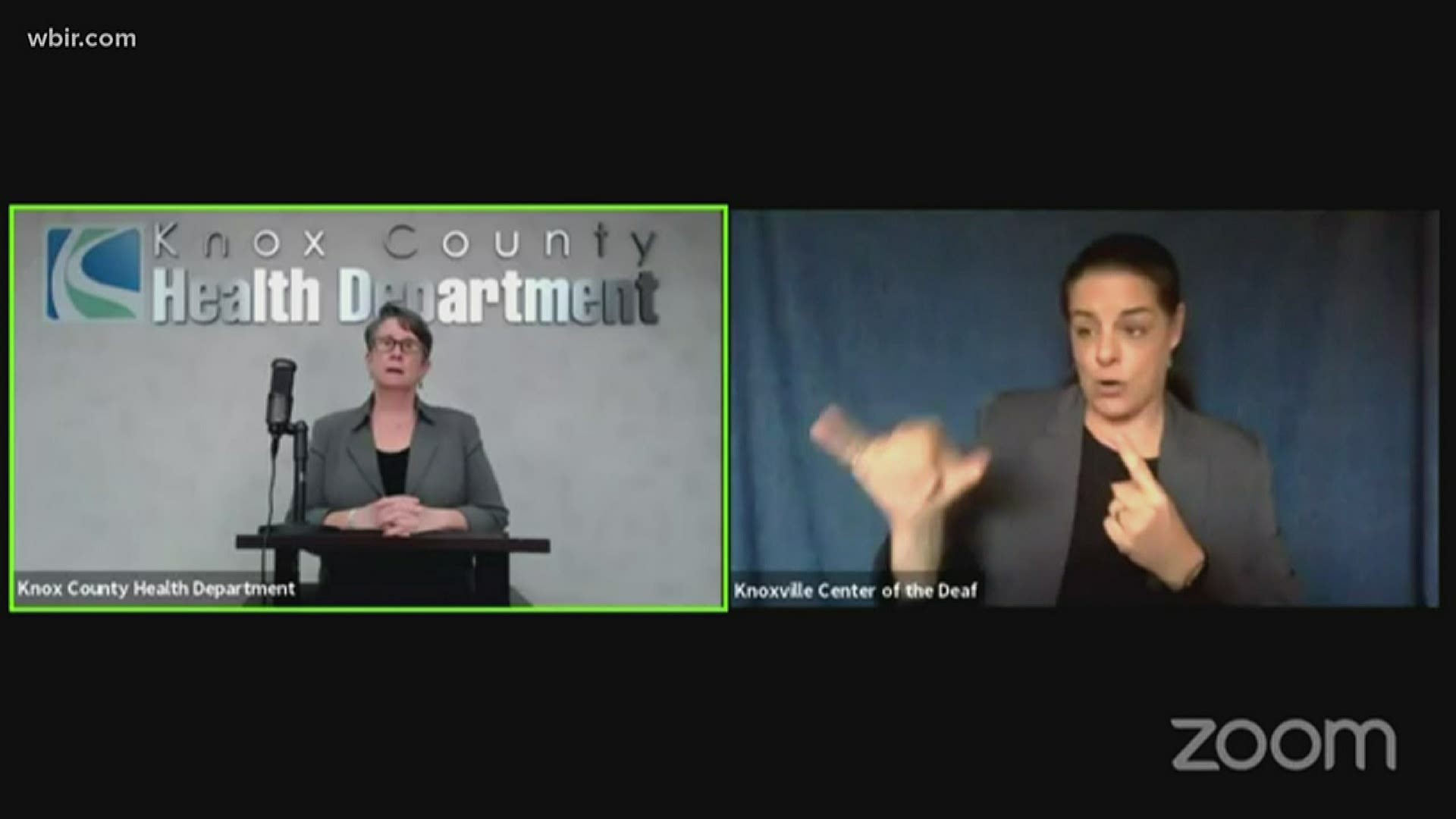 RELATED: US and Canada extend border shutdown to June 21

It's ultimately Knox County Health Department Director Dr. Martha Buchanan's call, after weighing advice and looking at how the virus appears to be affecting the public's health.

"We‘ll be coming out with our recommendations later this week," Buchanan said Tuesday. "We’re looking at that, and we’re considering that.

Credit: WBIR
Knox County Mayor Glenn Jacobs talks about the prospect of moving up a loosening of restrictions on area businesses.

"We're looking at our data. Our data looks really good right now so I think we'll be able to recommend moving into phase 2 as planned -- possibly next week."

Mayor Glenn Jacobs said Monday if the state is ready to loosen restrictions for 89 counties -- not counting major metros such as Knox County -- then Knox County should be ready to respond in kind.

Knoxville Mayor Indya Kincannon, however, issued a statement Monday afternoon that urged caution and said if progress remains on course that she supports entering a second, planned phase 2 with fewer limitations on business operations starting May 29.

The Knoxville-Knox County Reopening Task Force, which includes business leaders and city and county administrators, meets Tuesday afternoon to discuss progress in fighting the highly contagious virus. Knox County has had low case growth, and no resident has been hospitalized now for several days.

WBIR asked to watch Tuesday's virtual meeting, but county officials say the Health Department and the task force want to keep it closed.

Several media outlets asked Buchanan about businesses including restaurants that may not be following guidelines and are forcing employees to break the rules. WBIR has gotten numerous messages through social media about one in particular.

Buchanan said she trusts businesses to follow the rules -- and she said most are. Another option for the public -- vote with your dollars and avoid places that aren't complying, she said.

Buchanan opened Tuesday's briefing with a message of compassion.

"These are scary, uncertain times, but we must never forget who we are or what we stand for," she said. 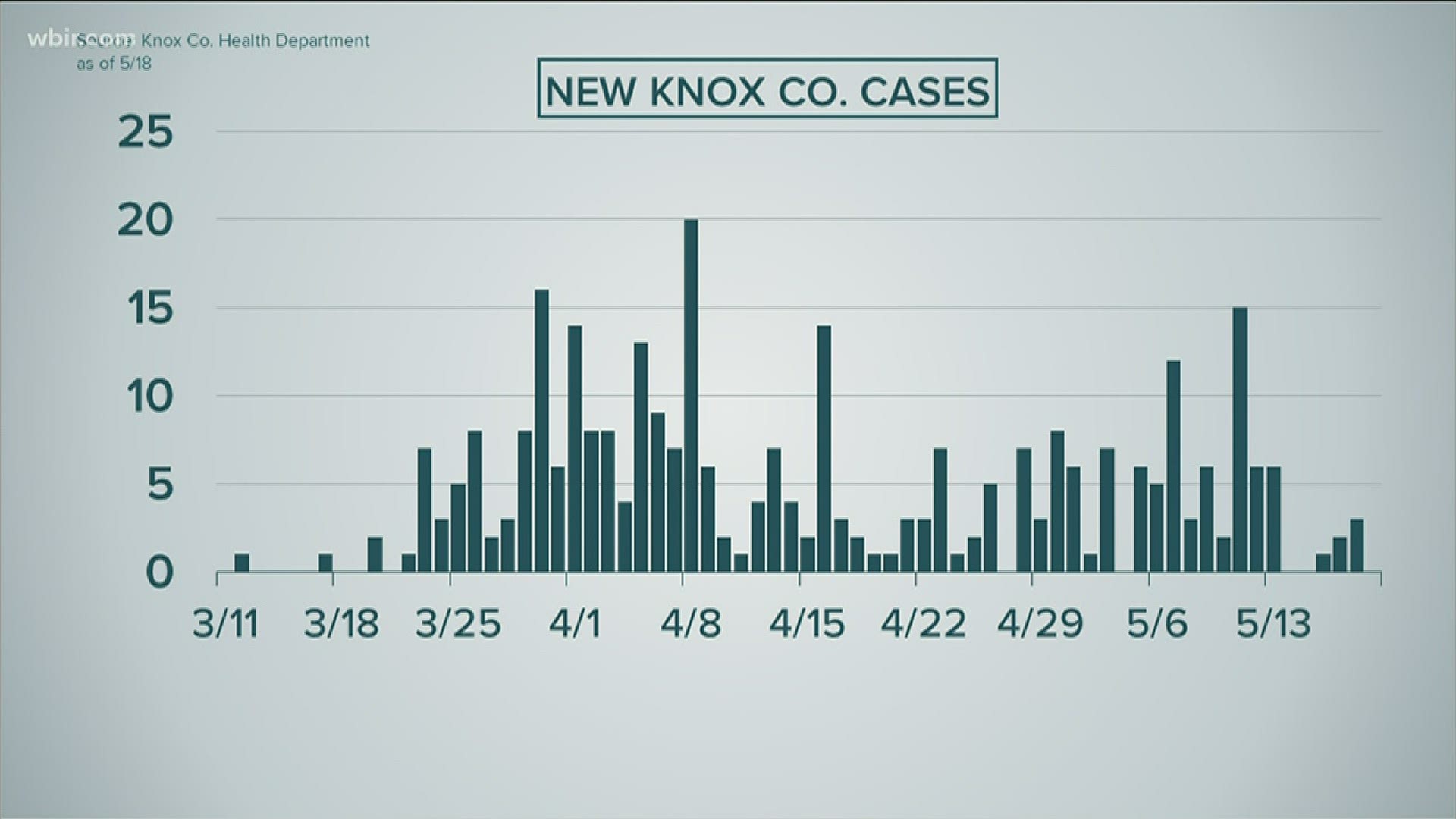 She said she knows some people are frustrated about the virus and its effect on society and freedom of movement.

She said she understands.

"The fact remains it's not over. The virus is not gone, and the risk is still very real. So if you're out and see someone without a mask and you don't agree with it, show compassion. ... If you're asked by a business to follow certain guidelines, show compassion.

"The only way we'll get through this is together."