DANDRIDGE, Tenn. — The assistant facility administrator at a Jefferson County youth prison knocked a 16-year-old inmate off his chair, lifted him into the air and threw him into a cell wall during a confrontation last July, a video recording showed.

On the surveillance video, obtained by 10News, Jonathan "JT" Thomas can be seen entering the prison's common room and grabbing 16-year-old Bradley Harmon by the legs. He "proceeded to drag [Harmon] onto the floor and a scuffle began," a police report said.

Thomas picked the teenager off the ground, then held him in the air, carried him into a cell and threw him against the wall, the video showed. He remained in the room with Harmon for at least 90 seconds more.

Earlier in the day, according to the police report, Harmon attacked a guard and tried to steal his keys to escape. The assistant facility administrator confronted him sometime later, after that situation was resolved.

Immediately before the confrontation, Thomas had approached Harmon and there "appears to be a verbal exchange between the two," according to the police report.

The report described the incident as "excessive force" and an "altercation."

"I have no words," Harmon's mother, Crystal Harmon, said in tears after watching the video of her son's altercation.

"If it was me, I'd be in jail. I'd be sitting in jail," she said. "Why are these staff members just getting fired? Why aren't they getting charged?"

The case is now closed, according to the police department.

The police report redacted Thomas's contact information. Despite 10News' efforts, he could not be reached for comment.

10News reached out to TrueCore and asked about Thomas, this incident and the investigation into it.

A spokesperson responded: "TrueCore Behavioral Solutions maintains a zero-tolerance policy for any inappropriate conduct toward youth by our employees, and the employee in question was terminated. The safety of the youth at our facilities is our top priority."

In a statement Wednesday afternoon, a spokesperson for the Department of Children's Services said she could not comment on the outcome of the department's investigation.

"To our knowledge, Mr. Thomas is not working for any of our contracted facilities," spokesperson Jennifer Donnals said. "I can tell you that the state law on reporting child abuse to prosecutors and the juvenile court judge was followed."

Bleeding and a "pump knot" 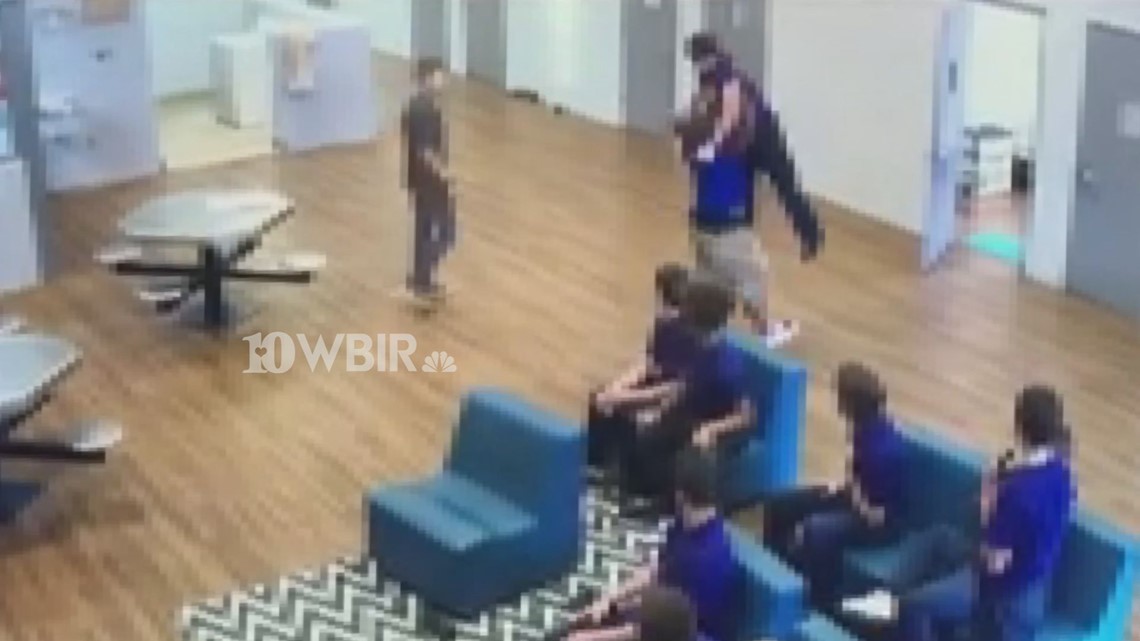 In the minutes before the confrontation, Harmon and several other inmates at the Mountain View Academy for Young Men can be seen sitting on chairs, apparently watching television.

Harmon's earlier escape attempt had apparently been resolved. The keys and radio he stole from guard Harley Wise were returned by other inmates, the police report said.

At 1:37 that afternoon, the video showed Thomas and Wise entered the common room on the Alpha unit, reserved for less serious offenders. Thomas, who current and former employees identified as the facility's second-in-command, appears to instruct Wise to open a cell door before approaching Harmon from behind.

It is not clear from the grainy surveillance video what Harmon may have said to Thomas in the "verbal exchange" before the incident indicated in the police report.

As Thomas begins to confront Harmon, the other inmates — juveniles convicted of crimes ranging from truancy to rape and murder — remain seated in the lounge area, watching it go down.

"At one point, it does appear that [Harmon's] head strikes the wall," the police report reads. "Guard Wise can be seen looking into the room but did not enter it. Wise is then seen walking away from the incident."

No one called for medical treatment after the incident, the report said. Harmon did not get help until facility medical staff came to the unit on an unrelated matter, the police report said. When they arrived, Thomas asked them to take a look at Harmon.

"The medical staff did note light bleeding and a pump knot on [Harmon's] head," the report said.

An investigation into what happened did not begin until Harmon spoke with his mother and she reported it to the facility, the report said.

"He says 'look at my head,'" Crystal Harmon recalled her son saying in a visit days later. "When I looked at it, it's a big pump knot. It's scabbing. There's been some blood there. It's pretty big and I'm like 'wow, what happened?'"

"He does have issues"

Bradley Harmon, who is now 17 years old, has been in and out of DCS custody since he was 13 years old, his mother told 10News.

"He's a good kid, just the wrong crowd. Wrong people, peer pressure," she said. "My child is out of control at times. He does have issues, I'm not going to sit here and say that he doesn't or that he's innocent by any means."

She said Bradley Harmon was committed to Mountain View most recently for burglary, theft and violation of parole.

Unlike some Mountain View inmates, Crystal Harmon said Bradley never faced accusations of murder, attempted murder, rape or sexual assault. She said he was initiated into a gang while in custody.

"He's always the smallest one in the facility," she said. "He's learned to defend himself. That's the way, that's the only way he knows. Just the way he's been taught."

"He had a fight basically every single day he was there."

When asked about the reported escape attempt and attack on the guard the day of this incident, Crystal Harmon said, "Yeah, I mean, it's possible. If he can run, he's going to run. He's very scared inside. He's very scared."

Before Bradley got in trouble, she said he enjoyed riding his bike and playing basketball.

"He was a normal, happy-go-lucky child." She said. "He has lost all hope there is."

Bradley Harmon is now housed in Detroit, Mich. on behalf of the DCS, his mother said. He calls home about once a week for anywhere from five to 15 minutes "depending on if he's in trouble."

"It's hid behind them walls"

The video of Thomas confronting Bradley Harmon is only one battle in the war behind the walls of Mountain View.

A 10News review of police records shows at least 50 incidents of violence and unrest at the troubled prison for young men since 2016. Inmates assaulted staff members, riots required dozens of local police officers to control and guards found drugs on the premises.

Inmates smoked cigarettes and marijuana and gorged themselves on online pornography for days, employees told 10News.

The boys, one current employee said, "basically are doing what they want."

"The majority of the staff is getting assaulted," said former shift supervisor Beverly Stroupe. "The youth are destroying everything. It's on a day-to-day basis that they're breaking windows out. They're breaking TVs. They refuse to go to school."

The facility is owned by the state but was operated by TrueCore Behavioral Solutions from Summer 2017. After a series of 10News investigations into problems at the facility, the state severed ties with the company at all four of its Tennessee prisons this month.

Crystal Harmon said Bradley encountered problems at DCS facilities across the state — not just at Mountain View. She said he suffered injuries at the hands of both inmates and other staff members.

"Inside the facilities, DCS doesn't know what's going on and unless it's reported, it's hid behind them walls," Crystal Harmon said.

"Out and out physical assault"

In a statement Tuesday, District Attorney Jimmy Dunn said: "I did speak to my staff and I have determined that I can not discuss that situation publicly at this time."

Knoxville lawyer Dennis Francis said there are a number of charges Thomas could face, from child abuse to felony aggravated assault, which carries an 8-12 year prison sentence.

"I'd say it's excessive force by anybody's definition," he said. "I don't know if he went into the cell with this kid because there's no camera in there or he simply wanted a smaller space to pummel him."

Francis said the extent of Harmon's injuries would determine the possible charges and the verbal exchange noted in the police report between the teenager and administrator did not excuse his behavior.

"Words alone are not enough provocation for an assault," he said. "[Harmon] should be subject to the disciplinary rules of that institution, rather than just combat."

"Because somebody is in custody does not mean that they become somebody's punching bag because they feel like it," Francis said.