The Voice winner and Knoxville native, Chris Blue, was at Chicago's Advocate Lutheran General Hospital to join volunteers in delivering the healing bouquets. 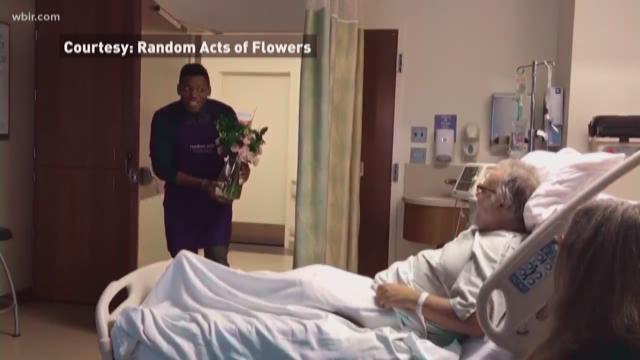 Random Acts of Flowers made its 250,000th delivery Wednesday with the help of a Knoxville singer.

The national nonprofit improves the emotional health and wellbeing of individuals in healthcare facilities by delivering recycled flowers, encouragement and personal moments of kindness.

The Voice winner and Knoxville native, Chris Blue, was at Chicago's Advocate Lutheran General Hospital to join volunteers in delivering the healing bouquets. They went to oncology patients in honor of breast cancer awareness month.

“I never imagined how far reaching this would be when we started Random Acts of Flowers,” founder and CEO Larsen Jay said.

Jay was moved to give back after suffering a near-fatal accident and personally experiencing the healing power of flowers during his recovery.

“We owe so much to the thousands of volunteers, the community leaders, our partners and our donors who share our vision to nurture a culture of care and compassion,” Jay said.

Blue, who is busy working on his first album in New York with mentor Alicia Keys, broke away to share the vision of Random Acts of Flowers and make this delivery.

“I want to inspire people, to be the light and glue to bring people together. That’s what Random Acts of Flowers does every day, offering hope and light to those who are suffering and lonely," Blue said.

Random Acts of Flowers was launched in 2008 in Jay’s hometown of Knoxville, Tenn.

There are now branches opening in Tampa Bay, Chicago, Silicon Valley and Indianapolis, where a small team and thousands of dedicated volunteers work every day to remind some of the most vulnerable members of their communities that they are loved and cared for.