Many couples struggling to get pregnant turn to IVF

Infertility impacts one in seven couples in the United States. Many struggling to get pregnant often turn to In Vitro Fertilization or IVF. 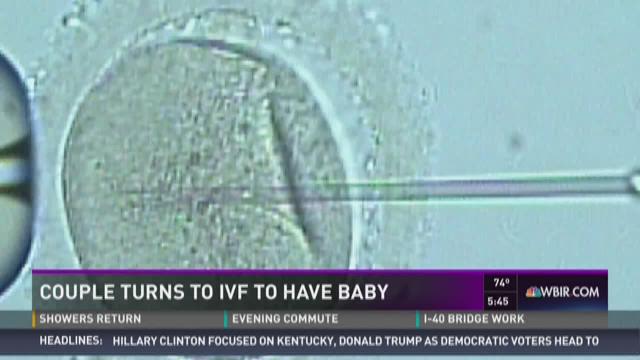 Infertility impacts one in seven couples in the United States. Many struggling to get pregnant often turn to in vitro fertilization or IVF. Doctors in the U.S. began using the assisted reproductive technology in 1981. In 2002, one in every 100 babies born in the U.S. was conceived through IVF. In 2014, more than 65,000 babies were born primarily through IVF.

IVF is the most common assisted reproductive technology.

“In vitro fertilization is what people have always called the test tube babies,” Dr. George Hill with Nashville Fertility Center explained. “And that simply involves stimulating the female more aggressively with ovulation induction drugs because you want to try to get as many eggs as you can.”

RELATED: Infertility a harsh reality for many couples

The eggs are then retrieved from the ovaries, and embryologists mix those eggs with partner’s sperm. They watch closely for embryo development. “And three or five days later will transfer one or two of those embryos back in the uterus and hope that one of those implants,” Dr. Hill said.

It sounds simple enough, but Katie Heatherly discovered an IVF cycle was anything but easy. She and her husband turned to treatments to expand their family after getting married.

Six weeks later, Heatherly had the egg retrieval and embryo transfer. “And then, I wasn’t pregnant. I was stunned. It was truly a death for me,” she said.

Heatherly wasn’t alone. In women younger than 35, the chance of getting pregnant with IVF is about 40 percent to 50 percent per cycle. That chance drops to 10 to 20 percent for women 40 and older.

“You’re looking at something probably in between $12,000 and $15,000 for one cycle of in vitro fertilization,” Dr. Hill said. Often times, IVF isn’t covered by insurance.

For Heatherly, doctors blamed poor egg quality for the reason IVF didn’t work. She added supplements, stopped drinking alcohol and caffeine, and even had surgery to remove endometriosis. After a second round of IVF, she found success.

“We both just broke down sobbing in each other’s arms," Heatherly said when she and her husband found out they were expecting.

&quot;They just took her and they placed her on my chest, and she was just so soft,&quot; Katie Heatherly said about the moment she saw her daughter for the first time. Evelyn was conceived through IVF.

“They just took her and they placed her on my chest and she was just so soft,” Heatherly recalled about the day of her daughter’s birth. “It’s so wonderful, and I’m so grateful, but I also remember that Mother’s Day when I didn’t have a baby,” she said. “I’ll never forget that feeling as long as I live.”

Heatherly decided to turn that nagging pain into action. She teamed up with Becky Dodson, the vice president of Mission Integration, to create an infertility support group at Tennova's Physicans Regional Medical Center. "I am a social worker and have lead different types of support groups in my career," Dodson said. "But I'm excited about this one because this topic. We're just now getting more comfortable as a society to talk about this."

However, it's still a difficult conversation. At the first meeting in April, no one showed. They hope over time, more and more people will have the courage to come. “You cannot do it alone, and sharing your story helps other people say ‘I too struggled with this, and I just ached everywhere, and now I feel better because I was able to talk about it,’” Heatherly said. She and Dodson say the group is open to anyone. "It's a journey for women, but it's a journey for couples, it's a journey for men," Dodson explained. "So, we're hopeful that the group would support anybody that would like to come."

The journey isn’t over for Heatherly. She would love to give Evelyn a younger sibling. She and her husband plan to try another IVF cycle later this year.

“We’ll see how it goes, you know, you just never know,” Heatherly said. “My story may only be Evelyn and that’s okay.”