"First, let me say that I have done nothing wrong or inappropriate during my term as state representative for the 71st District, which I proudly serve," Byrd said in a statement. 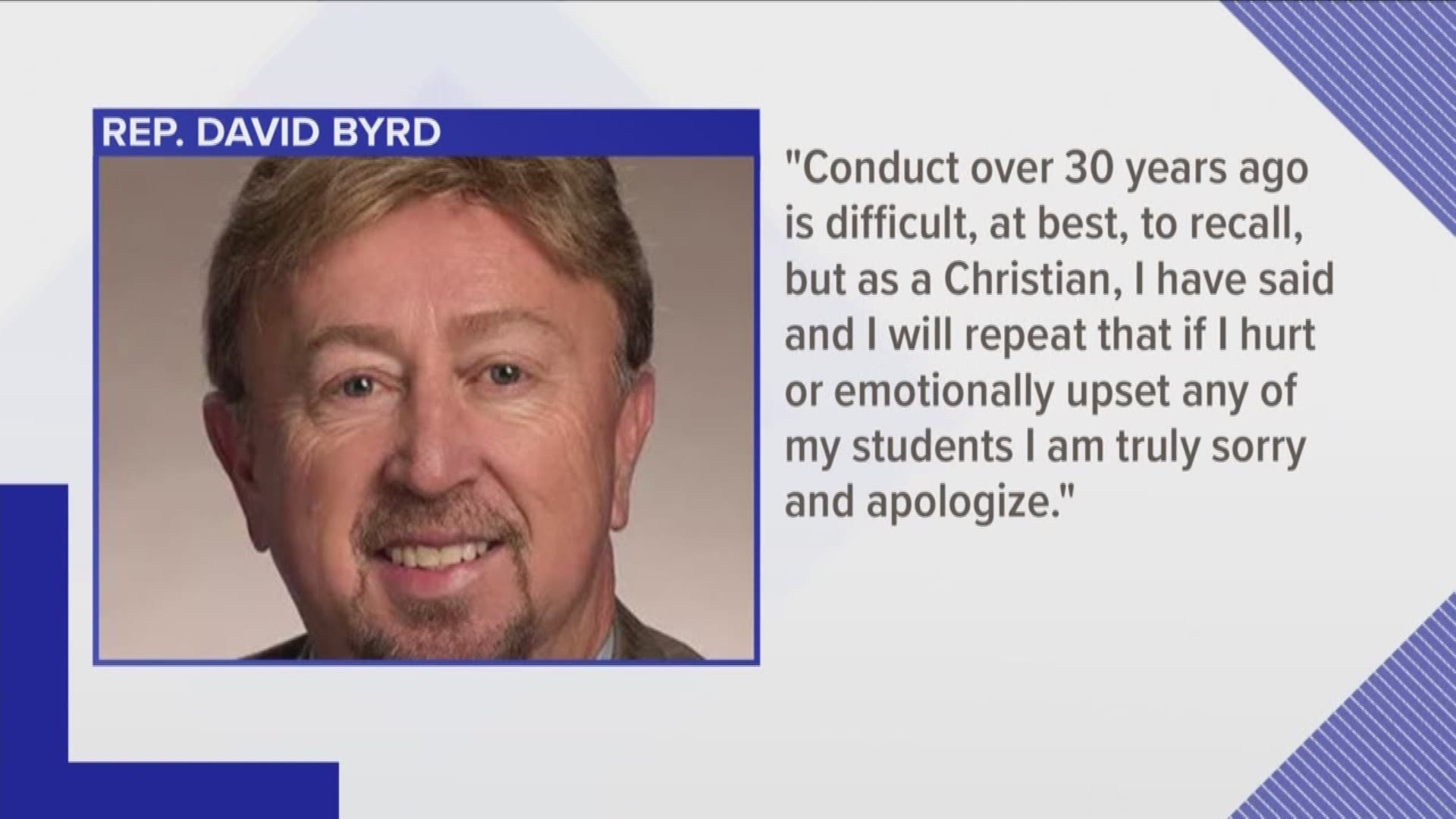 Rep. David Byrd, who is accused by three adult women of sexually assaulting them when they were teenagers, has denied wrongdoing and said that House Speaker Beth Harwell turned her back on him in asking him to resign.

“First, let me say that I have done nothing wrong or inappropriate during my term as state representative for the 71st District, which I proudly serve," Byrd said in a statement Wednesday afternoon. "I am disappointed that Speaker Harwell so quickly publicly turned her back on me but understand her political posture."

The allegations, reported by WSMV on Tuesday, date back to when Byrd, R-Waynesboro, served as head coach of the Wayne County High School girls basketball team, the Lady Cats.

Out of more than a dozen former players who spoke with WSMV over the last three months, three reported unwanted sexual contact initiated by Byrd.

Two of the women were 15 and one was 16 at the time they say their then-28-year-old coach sexually assaulted them.

Byrd, who graduated from the school in 1975 and coached there for 24 years, also spent eight years as the school’s principal. At the state Capitol, he is known as "Coach."

After the report, Harwell's spokeswoman, Kara Owen, said, "Speaker Harwell believes David Byrd should step down. The allegations are not related to the legislature."

After Byrd released his statement, Owen said Harwell stands by her call for Byrd to resign and referred personnel questions to Connie Ridley, director of legislative administration, because the allegations are unrelated to Byrd's service in the legislature.

Byrd in his statement said the recent allegations of inappropriate contact were "never before made, date back over three decades ago and are disheartening" to him and his family.

"One must question the motives of these three former students out of the hundreds of students I have coached," he said.

But Byrd doesn't deny the allegations. He simply says that conduct from over 30 years ago is difficult to recall and that as a Christian he has apologized if he "hurt or emotionally upset" any of his students.

"I do not condone sexually inappropriate behavior and hope that my behavior over the last 30 years bears that out," he said in the statement. "I ran for office, not for opportunity for myself but for the opportunity to help others and provide a service to this district. I understand that my stances on some issues in the House are controversial and I knew that I would have opponents who would seek to embellish my character."

Byrd goes on to say that he is working hard for his district and seeks to live out his life in a biblical way. He also says he does not believe any of the women who came forward can show they reported the allegations to the authorities.

He hopes to get back to work as usual.

But Senate and House leadership are not so sure it will be that easy.

House Majority Leader Glen Casada, R-Franklin, said Wednesday afternoon that he will reserve his opinions until after talking with Byrd personally, but that he was disappointed by the representative’s statement.

"The statement did not answer the questions I will be asking him. I just want to look him in the eye, man to man, and talk to him," Casada said in an interview. "I think he should come out and be very frank and (forthcoming) about everything."

Among the things the majority leader said Byrd should explain is what he was heard apologizing to one of the women for in a recording aired in WSMV's report.

Casada said he has reached out to Byrd for a personal response and will follow up with a phone call.

On Wednesday morning, Lt. Gov. Randy McNally, R-Oak Ridge, said he agreed with the House speaker and that Byrd should step down.

“Speaker Harwell has asked him to (resign) and I support her," McNally said. "We normally defer to the other leader in the House in situations like this and certainly support what she’s asking.”

McNally said he doesn't know if the news is true, but if it is, it's troubling.

The Senate leader said he would have taken the same actions as Harwell if the allegations were against a member of the state Senate. In that case, McNally said he would send the matter to the Senate Ethics Committee.

Rep. Steve McDaniel, R-Parkers Crossroads, chair of the House Ethics Committee, said no complaints have been filed and there are no plans for a meeting of the ethics committee on the matter.

“I have served with David Byrd for three years and he has shown character and integrity. This is not consistent with the behavior I have seen him exhibit," Williams said. "I haven’t talked to him since the allegations came out. It is my understanding he is going to release a statement. We are waiting to hear what he has to say.”

Williams said to his knowledge, no official complaint has been filed.

“This is certainly a serious issue and should be handled as such," he said. "These allegations are very disturbing, and I hope that the victims in this episode and their welfare are the focus of any efforts going forward. Speaker Harwell, as the leader of the House of Representatives, is well within her rights to call for a member’s resignation.”

Joel Ebert contributed to this report.