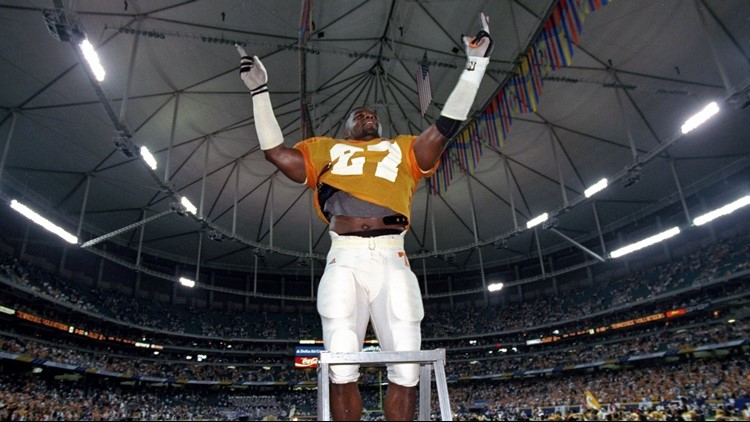 5 Dec 1998: Linebacker Al Wilson #27 of the Tennessse Volunteers conducts the Tennessee Pride of the Southland band during the SEC Championships against Mississippi State at the Georgia Dome. Tennessee defeated Mississippi St. 24-14.

Leading by example: Al Wilson and the '98 Vols

Larger than life, Al Wilson cemented himself as one of the greatest leaders in Tennessee history after the 1998 national championship run.
Author: Louis Fernandez
Published: 2:27 AM EDT August 22, 2018
Updated: 11:39 AM EDT August 30, 2018

It's hard not to reflect upon the 1998 Tennessee football season without bringing up one name.

An All-SEC and All-American linebacker, Wilson was a force on the field for UT and a difference maker off of it as well.

"Al was our leader, period," said Director of Athletics Phillip Fulmer, his back facing the very same field he patrolled for years as the head coach.

According to Vol historian Tom Mattingly, the linebacker always had a way with words.

"One of the offensive lineman told me, if he had a choice of being called on the carpet by Coach Fulmer or Al Wilson, he’d take his chance with Coach Fulmer," Mattingly said with a grin.

Wilson's presence was one of the most important factors for the 1998 Tennessee national championship team.

He established that leadership full and well the season before, with a conference title on the line. Trailing Auburn by ten points at halftime, Wilson made sure the team remembered what it was playing for

"Al Wilson and Peyton Manning scorched the walls in the dressing room with their, shall we say, motivation," said Mattingly.

That sounded about right to Leaverton.

"He went ballistic at halftime on the whole team and the coaches, they didn't say a thing."

A senior in 1998, kicker Jeff Hall said you could see the transformation of Al Wilson happening before your eyes.

"That’s where Al really stepped in and became the leader of the team," said Hall.

When asked about the speech after the game, Wilson told reporters exactly what was said.

Come Spring of ’98, head coach Phillip Fulmer challenged Wilson, asking him to step up, to do more.

"Peyton had left, Little had left, a lot of good players had gone on to pro football and we needed that kind of leadership," said Fulmer.

Wilson's response, according to the head coach, was more than anyone expected.

"But that’s who he was," said Hall. "He motivated people to go out and take responsibility for their own actions."

"He could motivate better than any of the coaches could do," reflected Leaverton.

His biggest game of 1998 came in one of the most critical moments. Wilson recorded 12 tackles and a UT record three forced fumbles, knocking off Florida in overtime. The Gators were in the BCS national championship conversation for most of the year and that’s not even considering the constant injuries Wilson battled throughout the season. The captain led with what he said and what he did.

His inspiration helped guide this Tennessee team to the promised land; the first ever BCS national championship.

"We just told ourselves we would not be denied from winning this national championship," said Wilson after the win against Florida State. "We’ve come this far, we have a lot of doubters and we wanted to prove the doubters wrong, and I think we did that."

"He was one of the best if not the best we’ve ever had at Tennessee in my time," said his head coach.

As both a player and a fan, Hall said it was hard not to appreciate all he did for his players, coaches and fans while captain of the Big Orange.

"He is my favorite player of all time just because I got to see firsthand how he could motivate a bunch of guys from different backgrounds to all come together and do one thing that was bigger than any of us could have imagined."