Joel M. Guy Jr. is being held in the Knox County jail, accused of killing his parents over Thanksgiving weekend 2016 in their Goldenview Lane home. 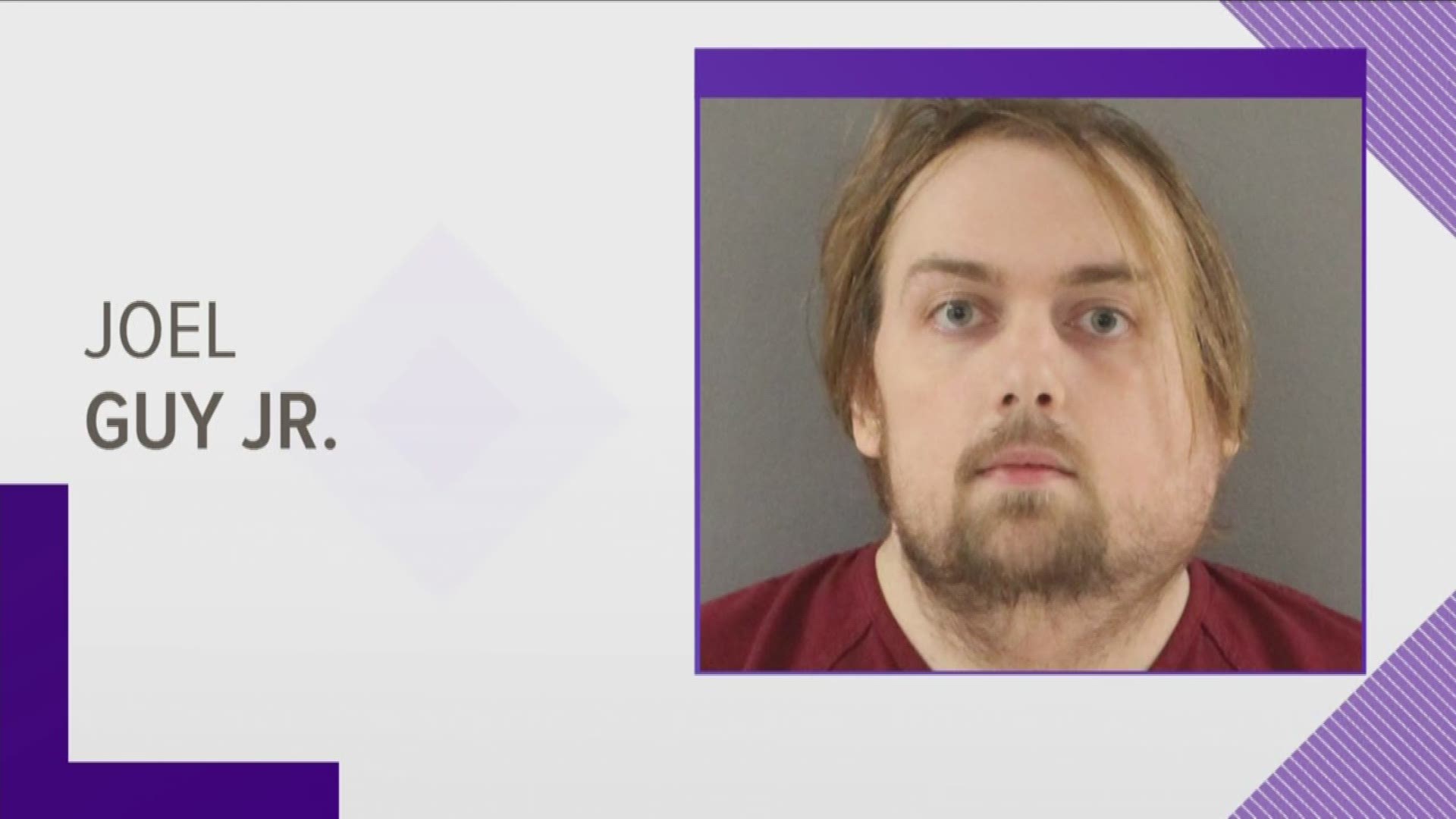 KNOXVILLE, Tenn. — The man accused of cutting up his parents over Thanksgiving Weekend 2016 and trying to destroy their body parts wants to keep out damning evidence that might convict him.

State prosecutors trying to send Joel M. Guy, 31, to prison are just as set on ensuring the evidence gets in.

In court Wednesday, Knox County Criminal Court Judge Bob McGee said he would allow the defense to file what's called an interlocutory appeal, meaning before trial. Defense attorneys object to his decision to let prosecutors use evidence against Guy that was taken from the homicide scene.

The defense will take that up with the Court of Criminal Appeals. Knox County prosecutors plan to appeal.

McGee said he had anticipated that as well.

The judge, meanwhile, said he also would try to prepare written rulings on two defense motions to suppress other evidence before he steps down at the end of the month.. The defense wants to keep out evidence seized from Guy's car and his Louisiana apartment in 2016.

Defense attorneys Jonathan Harwell and Mark Stephens argue McGee was wrong last month to clear the way for the state to introduce items taken the West Knox County home of Joel Guy Sr., 61, and Lisa Guy, 55. They were found dead and dismembered in the home Nov. 28, 2016.

McGee said Guy didn't have standing to challenge seizure of evidence from the house on Goldenview Lane generally because he didn't live there.

The judge also specifically addressed items taken from a bedroom of the house that Guy used while visiting his parents for Thanksgiving 2016. The items included a backpack with a notebook and a laptop.

McGee ruled authorities may have had a warrant at the time they took items from the room. Regardless, however, he found that the circumstances were such that authorities had a right to go in and search the house.

No one had heard from the couple, who were about to move away, for a couple days. A friend of Lisa Guy's became concerned Nov. 28, 2016.

The home was for sale. The Guys' vehicles were parked out front.

RELATED: Judge allows use of some evidence in dismemberment murder case; other requests pending

When deputies entered the shuttered house, they found body parts in various rooms and evidence of violence. Lisa Guy's head later was discovered cooking in a pot on the kitchen stove, according to the prosecution.

Guy is charged with first-degree murder and abuse of a corpse.

The defense argues Guy had a say in who came into the home because he used it when he visited his parents. They say the Knox County Sheriff's Office should have gotten a search warrant before making their first trip in the house.

Prosecutors suggest Guy likely killed his parents on the afternoon of Saturday, Nov. 26, soon after his mother came home from buying groceries. Besides her head, Guy's father's hands were found on the floor of another room, and other body parts were located in blue plastic bins in an upstairs bathroom, court records state.

On the afternoon of Nov. 26, evidence such as receipts indicates Guy went to a Knox County Lowe's, Walmart and Home Depot, buying things like isopropyl alcohol and hydrogen peroxide. Video recovered from one store showed him with a bandaged hand, according to the prosecution.

Guy testified last year at a hearing that he left his parents' home, with the thermostat on high and space heaters blazing, on Sunday, Nov. 27, to get treatment in Baton Rouge for cuts to his hand. He left a dog shut up in an upstairs bedroom.

After his hand was treated, the defense says he headed back to Knox County. He knew he'd left his laptop and other items in the room, according to the defense, but when he drove into the neighborhood late on Nov. 28 or early on Nov. 29 and saw crime scene tape around the home, he decided to turn around and go back to Louisiana.

Other evidence in play

McGee retires at the end of the month. He still has to rule on defense motions to throw out evidence taken from Guy's Louisiana apartment and his car.

According to Knox County prosecutor Leslie Nassios, when Louisiana police searched Guy's Baton Rouge apartment they found receipts indicating he'd bought gloves, a spray bottle, an iron pipe, muriatic acid, Liquid Fire, sewer cleaner and other items --- all on Nov. 7, 2016, before he drove up to see his parents.

"At the (Guy home), investigators also discovered a note in an open bag in an upstairs bedroom that depicted the name and Louisiana address of an Ace Hardware Store along with a notation about sewer line cleaner," court records state.