Each year Lindsay Huffman and her family go all pink for the Susan G. Komen East Tennessee Race for the Cure. The 2020 pandemic isn't changing their determination. 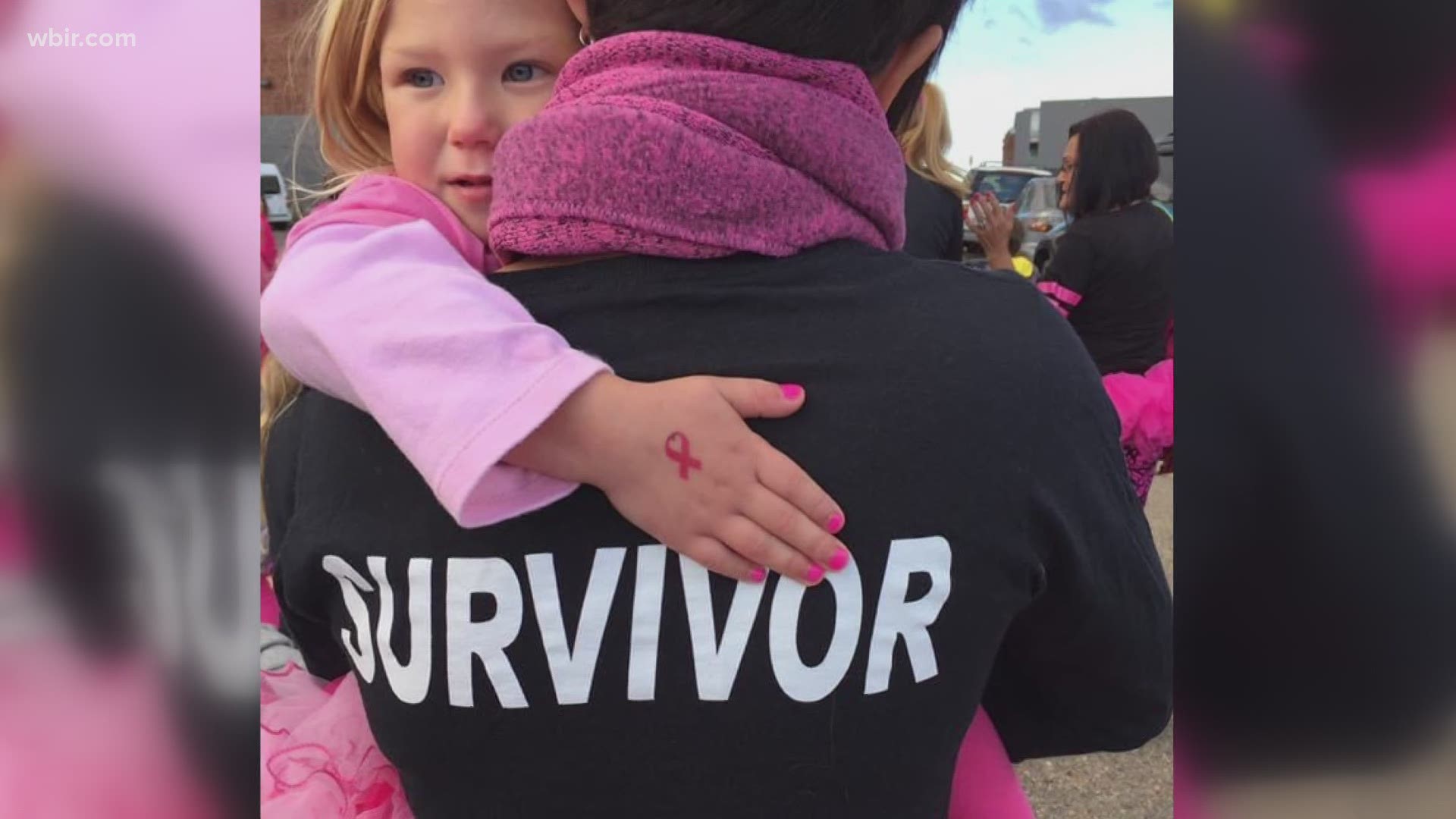 KNOXVILLE, Tenn. — In 2013, Lindsay Huffman found out she had breast cancer after she was kicked by her young child while changing their diaper. She was 35 years old.

"It was a very intense pain that almost took me to my knees," Lindsay said. "I knew something wasn't right."

Eventually, Lindsay went to the doctor who told her she wasn't able to feel anything during a breast exam. The doctor then suggested a mammogram at Knoxville Comprehensive Breast Center just to make sure.

"I did the mammogram and by the look on the lady's face, I knew something was wrong," Lindsay said.

An ultra-sound confirmed that it was breast cancer.

"It was a really aggressive cancer and within a week I had a surgeon, a medical oncologist, reconstructive surgeon and I was sitting in a chemo chair 2 weeks later. I started surgery in May and had 7 surgeries and it was a really long journey. I got the all-clear right before the walk-in October (2014)."

Lindsay's family rallied around her after her diagnosis. She has three young daughters who went all-out with pink when it came to the annual Race for the Cure walks.

"They were looking to me for strength," Lindsay said. "And when we did the walk, they went all out. They wore shirts and tutus, my dad wore a tutu, all the men in my family wore a tutu. We had a great time and since then, it's been a tradition they look forward to like Christmas. They start talking about it in March."

In 2020, the Susan G. Komen East Tennessee Race for the Cure will be Virtual on October 31. One of the highlights of each year's race is the tribute to the survivors.

This year, the survivors will take part in a parade on the morning of race day. Komen East Tennessee will share it on their Facebook page live.

"We've had so many calls," said Amy Dunaway, Exec. Director of Susan G. Komen East Tennessee. "We always try to honor our survivors on race day and I think this is just going to be another way and another step to honor them. They're going to feel like princesses and pageant queens in the backs of cars waving at their adoring fans. We talk every year that the Race for the Cure for these women it's not another 5k for them, it's another year of survivorship for them and we want to honor and celebrate those women as they cross that finish line."

Lindsay and her family have big plans for that parade. They've rented a Hummer limo for the family to deck out in full-on pink balloons and signs.

"My girls are why I do this every year," Lindsay said. "We are not in this journey alone and once a cancer patient, always a cancer patient. But, it doesn't have to be sad. One thing I will miss about the race is when we are walking down the street  people go up and hug strangers if you have 'survivor' on your back. Everybody wants to love on each other because we are all in this together."

You can still sign up to take part in the virtual Race for the Cure, visit komeneasttennessee.org to learn more.