Rockets' red glare: Where to watch fireworks in East Tennessee

Several communities already have released their plans for the July 4 weekend. 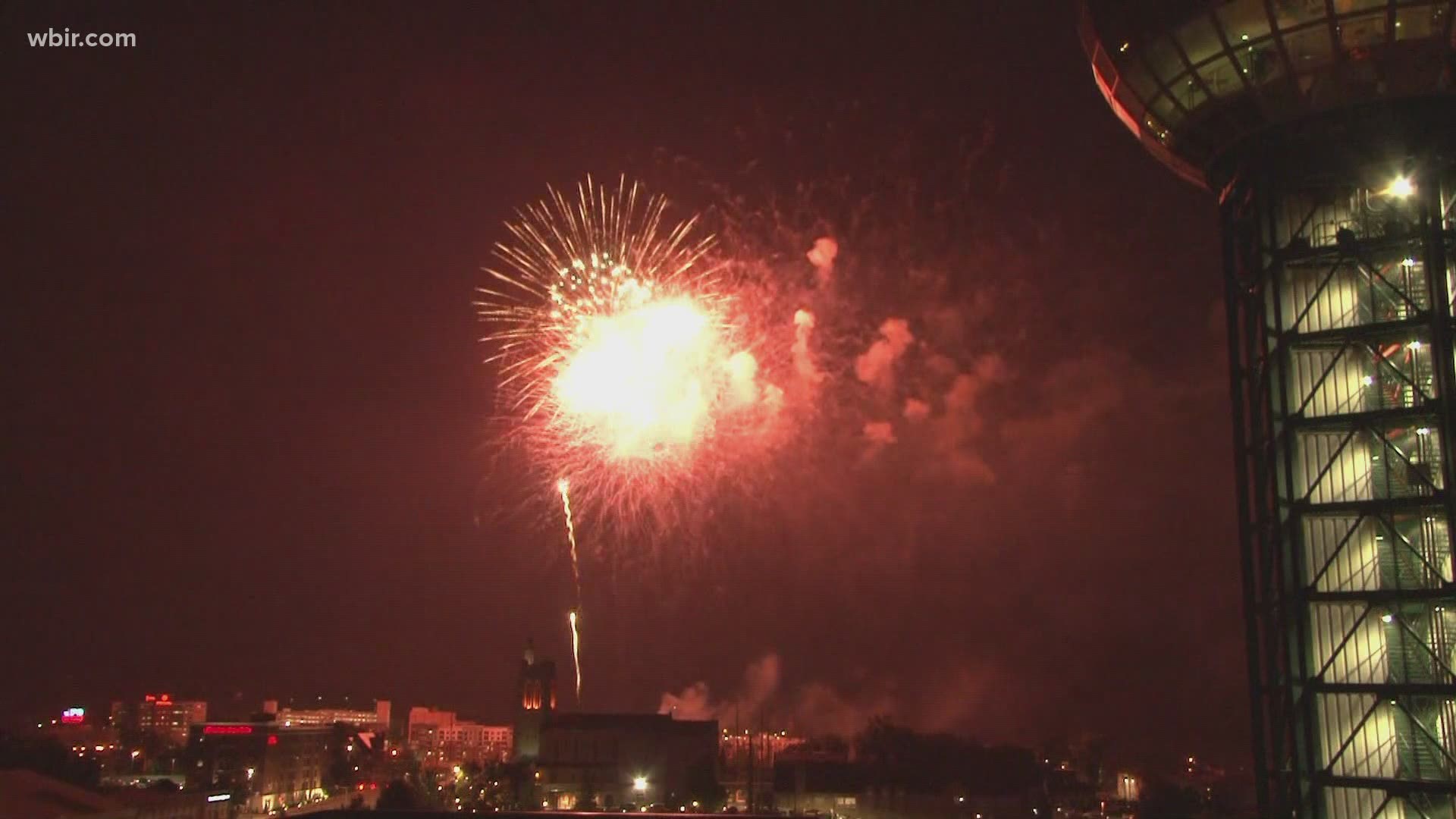 KNOXVILLE, Tenn. — As life slowly -- and thankfully -- returns to pre-pandemic normalcy, it is no surprise that multiple cities are announcing Fourth of July events.

WBIR is keeping a running list that will be available on an ongoing basis as we learn about more festivities. 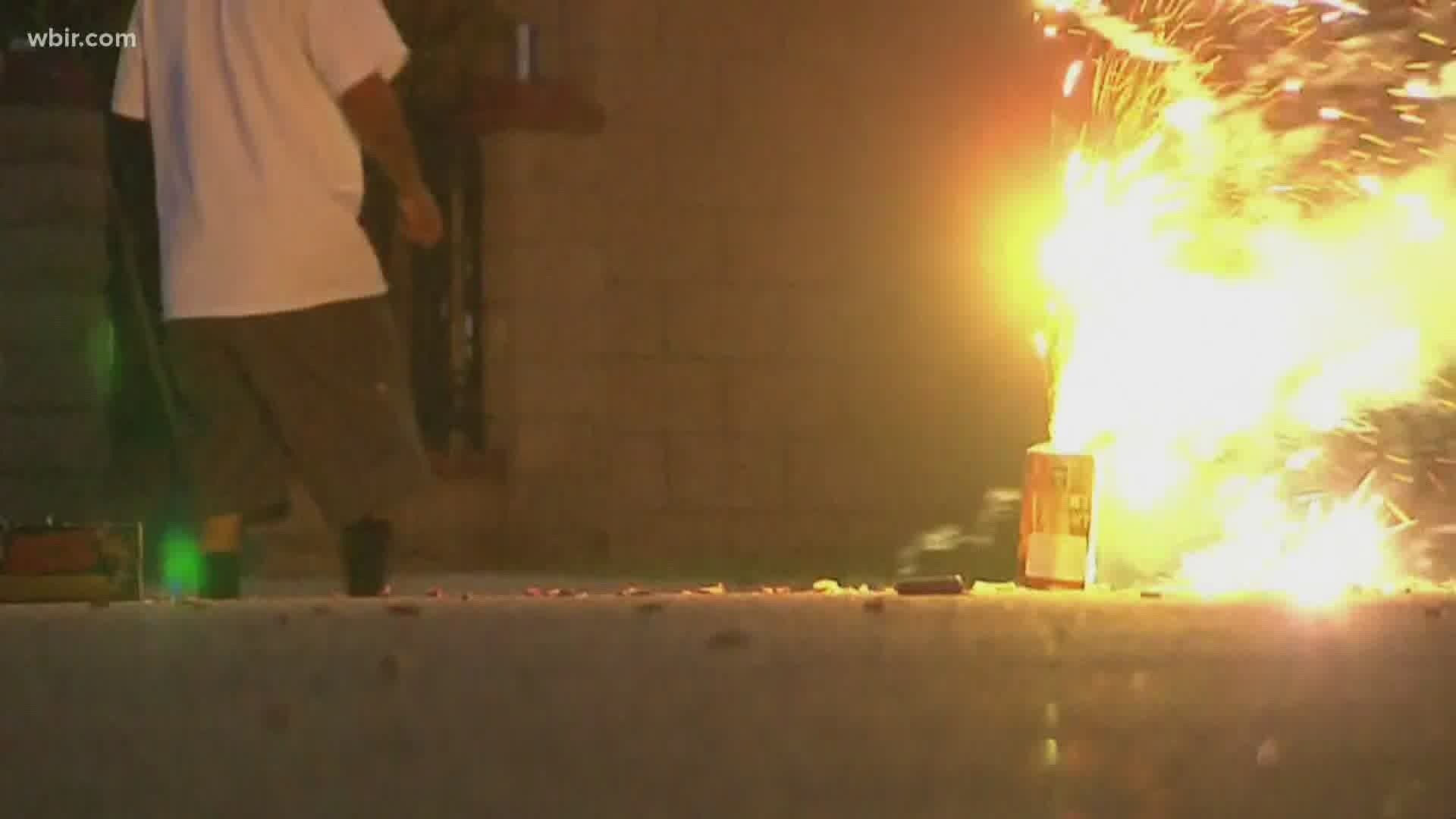 Remember, July 4 is on a Sunday this year. Some events are on the actual day; others are a day or two beforehand.

Where to watch fireworks:

That day the 572nd Air National Guard Band of the South will perform on the Randy Tyree Performance Lawn at World's Fair Park. The band is based at McGhee-Tyson Air National Guard Base, and as only one of 17 Air Force bands in the world, has performed across the country. The night will include performances by the Concert band, jazz band Blue Groove, and rock band Sound Barrier.

"It's going to be a little different this year, but it's still going to be an absolutely wonderful time," said Kyndra Brewer, director of special events for the City of Knoxville. "We're super excited."

Police want to remind you that fireworks sales and use are prohibited within the city limits.

Then, on July 3, organizers said the Knoxville Symphony Orchestra will perform at the World's Fair Park Amphitheater.

The event will begin 5 p.m. July 3 and end with fireworks at 10 p.m. at Lakefront Park in Clinton.

There'll be play equipment for children, and Little Ponderosa Zoo will set up a petting zoo area for families to enjoy.

Food vendors also will be on hand, and there'll be live music by Fair Promise Church.

"We really took it up a notch this year in terms of our entertainment," said Butch Helton, manager of Pigeon Forge Department of Tourism’s Office of Special Events. "We're going to have some great entertainment and food and drink and fireworks... It's going to be a super, super day to celebrate our nation's birthday."

Tailgating will be permitted at Loudon's Independence Day Celebration, with viewing areas surrounding the municipal park for a firework show.

Parade-goers are encouraged to arrive early the evening of July 3 to secure the perfect viewing area along the parade route.  Then, at 10 p.m. July 4, there'll be fireworks over the Space Needle. While you can see the fireworks from just about anywhere in Gatlinburg, some of the best views will be in the area around traffic lights #3 and #5.

Anakeesta said 33 guests will be able to watch the gorgeous 4th of July fireworks after enjoying an exclusive night-time zip tour through the Smokies. Anakeesta’s expert zipline guides will host three night-time tours on the night of July 4th at 8:40 p.m., 9 p.m. and 9:20 p.m. Tickets will be $110 per person and include express general admission.

Ticket-holders can watch the Gatlinburg fireworks from above the Space Needle from the world's longest pedestrian bridge or several other viewing platforms at the park. The tickets will cover admission for both July 4 and 5 and includes access to the new Boardwalk on the SkyTrail, food and drink vouchers, and live music. Tickets are $59.95 for adults (12 and older) and $37.95 for children 4-11. Ages 3 and under are free. The event is limited to 600 people. Tickets can be purchased here.

The Smokies will host the final game in its series against the Rocket City Trash Pandas on July 4. The game starts at 7 p.m. and will be followed by fireworks. In addition, for $25 you can enjoy the Yee-Haw at the Yard buffet from 6 p.m. to 8 p.m. The menu features hamburgers, hot dogs, nachos with cheese, pork bbq, Bush's Baked Beans, potato salad, Uncle Ray's potato chips, popcorn, Mayfield ice cream sandwiches, and Pepsi products.

Mabry-Hazen House is hosting an old-fashioned Fourth of July celebration on July 4. There will be food, beer, live music, fun games, and tours of the 1858 house for $12 (includes two drinks from a local brewery).

There will be several activities including sack races, watermelon seed spitting contests, three-legged races, bocce, croquet, corn hole, and more. They will also have a reading of the Declaration of Independence. The historic house museum will open for self-guided tours.

The Museum of Appalachia will hold the Independence Day Anvil Shoot Celebration on July 4 from 9 a.m. to 4 p.m.

According to its website, the museum uses gunpowder to launch a 200-pound anvil hundreds of feet into the air.

The tradition of anvil-shooting is nearly obsolete, officials said, but the museum has made it a nearly 30-year tradition.

Museum officials said the advance tickets are 50% off for a limited time.

The City of Athens announced that it will host the Athens July 4, 2021 Buddy Liner Fireworks Show from Athens Regional Park. Fireworks will shoot off at 9:30 p.m., according to a release from officials.

The fireworks show will be a high-intensity, high-altitude show that will require the park to be closed to the general public, due to the fall zones required for the big shells.

The show may be viewed from anywhere in the vicinity of the park and spectators are asked to be considerate of private property when choosing a viewing location.

The City of Oak Ridge will hold its annual fireworks show to celebrate Independence Day.

The display will be held in A.K. Bissell Park on July 4 and will begin around 9:45 p.m.

The Oak Ridge Community Band, now in its 77th year, will perform prior to the fireworks. The concert is free, but donations are accepted by the band to help cover the cost of equipment and other expenses. The music is expected to start at 7:30 p.m.

Officials said that anyone planning to attend is advised to bring a lawn chair or blanket for outdoor seating. A safety zone will be established by the Oak Ridge Fire Department. Attendees should seat in designated areas.

According to a press release, parking will not be allowed along the Oak Ridge Turnpike right of way. Drivers should also not park on private property unless they have obtained permission from the owner.

The discharge of fireworks within Oak Ridge city limits is prohibited without a permit, officials said.

For more information visit the City of Oak Ridge Facebook page. You can also call the Oak Ridge Fire Department for additional information at 865-425-3520.

The City of Lafollette will host its Fourth of July fireworks celebrations with a fireworks show on July 2 beginning at dark behind Roane State Community College.