Video: Here is raw body camera video from officers responding to a riot at Mountain View youth prison on November 6, 2019.

DANDRIDGE, Tenn. — Another disturbance at Mountain View Academy for Young Men. Another call for police help.

The police dispatcher on Nov. 3 said, "All units, I need you to respond to Mountain View. There’s another riot. They’re advising they’ve started a fire this time."

It was the second alert of the night to the Dandridge center. And, records show, it was serious.

911 recordings and bodycam video obtained by 10News reveal the large law enforcement response and the mess created that night at Mountain View, which houses teen male offenders sent by the state.

It's one of at least four instances this month when the Dandridge Police Department, and sometimes other agencies, have had to respond to the fenced Peal Lane facility. 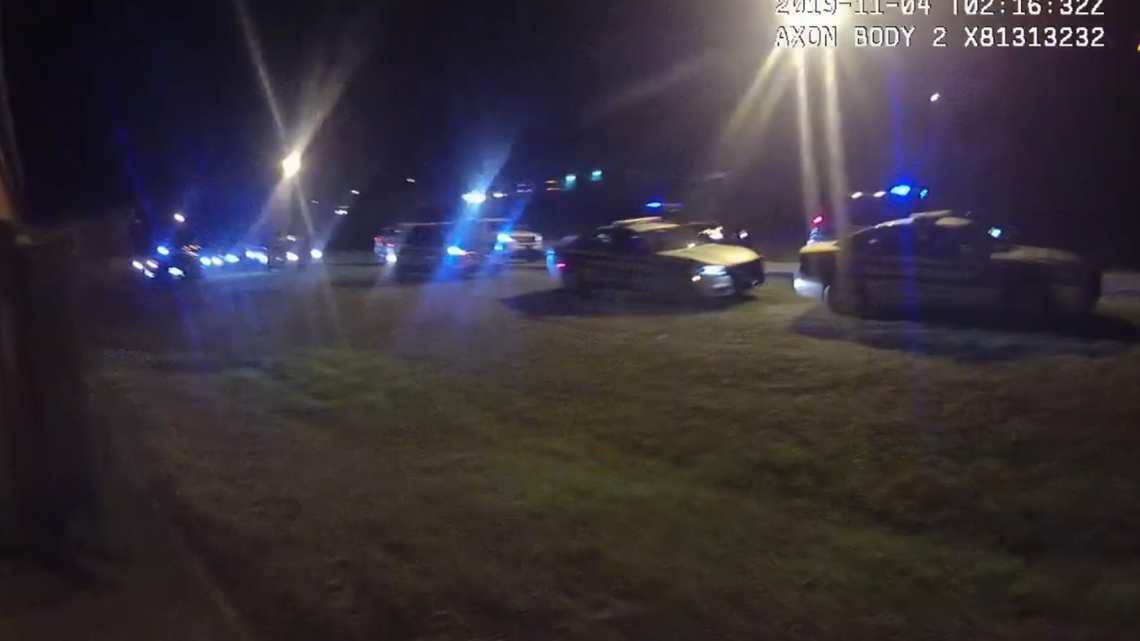 The center has operated for decades. It's been run by TrueCore Behavioral Solutions about 2 1/2 years.

Detective Lieutenant Kevin Bunch with the Dandridge Police Department has charged five additional inmates for an incident on Nov. 3. Four were charged with aggravated arson and one was charged with felony vandalism.

They're set to appear in Jefferson County Juvenile Court in January 2020.

"We appreciate the assistance provided by local law enforcement. We are thoroughly reviewing the facts of these incidents and will work with the Tennessee Department of Children's Services to make any needed adjustments going forward. The safety of the youth and staff at our facilities and the public are our top priorities."

Tennessee's new Department of Children's Services Commissioner Jennifer Nichols visited the center earlier this month. TrueCore runs the center, meant to be rehabilitative and therapeutic for young offenders, for the state.

Nichols, in a statement last Wednesday to 10News, said she wanted to make clear that recent reports of escapes from Mountain View are false. What's happened is some residents have committed vandalism and left their buildings - but not the grounds - without permission, she said.

"Finally, I have met with leadership from TrueCore, the private provider that operates Mountain View, to discuss their plans to increase security, address staffing retention and recruitment, and strengthen relationships with law enforcement and community leaders," her statement reads. "I have been assured TrueCore shares the same concerns that law enforcement, community leaders and I share."

Another view inside Charlie Unit after the second episode Nov. 3.
Jefferson City PD

50 cheeseburgers 'did not work'

Mountain View has 24 young males in what's considered a "secure" pod typically referred to as "Charlie" Unit, and more than 60 other residents in less-regulated pods referenced by names such as "Alpha" and "Bravo."

Dandridge police were dispatched twice to Mountain View on Nov. 3. It was a Sunday night. They'd also been sent there the day before, during which they encountered two inmates "cursing" at them and saw staff struggling with an inmate, records show.

About 7 p.m. Nov. 3, a call came in for help at Mountain View about four inmates who had "escaped" Charlie Unit's inner fence. Police started a search inside the grounds and were then alerted that the four were back in the unit, according to records.

"(The residents are) also trying to bust the windows and stuff out of Charlie Unit," one officer on the scene said. "They're requesting all of us to come in here and lock everybody down."

A supervisor chimed in that they needed to go in together to ensure no one got hurt.

Staff asked the police to help lock the young men in their cells because they were "out of control," a report states. Some 15 cops went in, physically escorting some residents who didn't want to be locked down.

Police also saw a mess on the floor.

"Officers observed food laying throughout the unit on the floor," according to records. "Officers were advised that the inmates were unhappy with what was (sic) they were served for dinner so they began throwing their food onto the floors.

"The director of the facility stated he was then advised by his supervisors to go to McDonald's and purchase approximately 50 cheeseburgers and fries for the inmates to satisfy them, which did not work."

After securing all the inmates, the officers headed back out on the road. It wasn't long before they'd return, however.

That same Sunday night, records and surveillance video showed, one of the young inmates in Charlie Unit used a lighter to set toilet paper on fire. He then tossed the lit paper through "the feeding hole" of his cell door.

At the time, there were 22 other inmates present as well as several correctional officers, a report states.

The fire set off sprinklers. Floors flooded. The central gathering room was coated in what appeared to be flame retardant. Staff had to release the inmates so they could go outside.

The dispatcher alerted officers about the riot and fire at 9:06 p.m.

"I’m just going to show everybody en route and responding," she said in recorded 911 traffic.

The fire department also was dispatched, although they were warned against entering until it was safe. Police also called for a K-9 from Jefferson City Police Department, tapes show.

Police were met with resistance when they arrived and moved into Charlie Unit's fenced-in area. About 23 young residents stood outside.

"They're throwing rocks at us!" an officer radioed in.

"The scene was chaotic, intense and rapidly evolving," he wrote in a later report. "Alarms were sounding from the building, with water and the odor of smoke emitting from the inside (of) the building. Officers waited on additional law enforcement to arrive on scene to assist with the situation."

Officers from at least a half-dozen agencies responded to Mountain View on Nov. 3.
Jefferson City PD

Officers from about a half-dozen agencies showed up, including Jefferson City police, the Jefferson County Sheriff's Office, the Tennessee Highway Patrol and the Tennessee Wildlife Resources Agency. Lights flashing, their vehicles lined the outside of the Mountain View buildings.

Officers lined up the inmates along a wall and escorted them to Bravo Unit. After the fire, the sprinklers and the fire retardant spray, Charlie Unit would have to be cleaned up again.

The officer's bodycam video shows police surveying disarray in the empty Charlie Unit and then shifting to nearby Bravo. Teams of officers went into several cells where inmates had been locked up.

Before going in, video shows, the boys were warned to get down on the floor. If they failed to cooperate, they'd be "pepper-sprayed or Tased," video shows.

"Any kind of move and you'll be Tased, OK?" an officer warned one young man as he was led out of the cell and put against the wall.

Officers searched each inmate for contraband and then locked them in rooms. While searching one boy an officer showed what appeared to be a lighter from his coat pocket, bodycam video shows.

Police arrested an unnamed juvenile and took him to the Dandridge Police Department to be interviewed. He was then taken to the county justice center, according to records.

Some inmates were unruly. Four to six were standing outside, yelling "black power," records state. They wouldn't go to their rooms.

An employee suffered injuries, was treated at the scene and then taken to the hospital.

One staffer told police the inmates had broken glass in a unit and "threaten to riot" again, a Nov. 6 Dandridge PD report states.

Three inmates, in particular, refused to cooperate at the scene, a report states. An officer used a Taser in a "drive-stun" move to get him to cooperate.

By now, TrueCore's chief administrative officer, Michael Pelletier, was on the scene. Reports show Mountain View's veteran administrator Adrian Cartledge had "walked out and quit" a few days before.

Commissioner Nichols came to Dandridge within days of the early November episodes. Along with the mayors of Dandridge and Jefferson County, she also met with District Attorney General James "Jimmy" Dunn, she said.

"During that meeting, we discussed long-standing rumors of the fence around Mountain View being removed, and I assured them that is not happening under my leadership," her statement to WBIR reads.

Nichols said she's committed to addressing recent incidents at Mountain View. But, she stressed, no one has escaped from the facility in many years.

She remains in touch with the mayors and police. She said she's also met with volunteers who work with the boys at Mountain View.

"The safety of the youth in state custody, the staff who care for the youth and the public are my top priorities as commissioner of the Department of Children's Services."