Beds in the hallways, packed emergency rooms and ambulances directed to go to a different hospital. We investigate the impact Tennova closing Physicians Regional has had other hospitals. 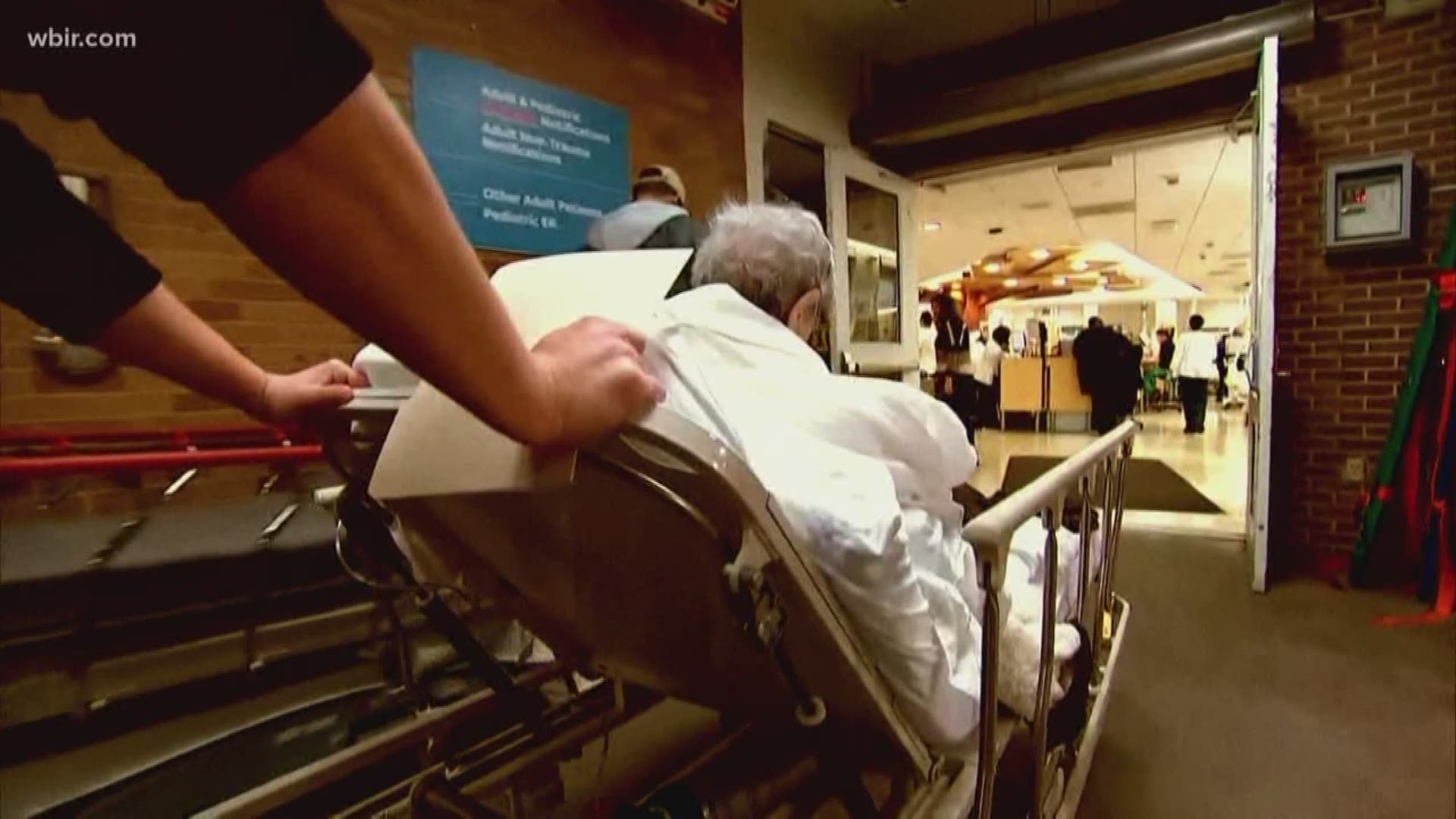 Fort Sanders said it has seen more ambulance traffic and longer patient wait times since the North Knoxville hospital closed, forcing the medical center to treat some patients in hallways.

"It can be scary for all of us," said Dr. Peter Kah, an emergency physician at Fort Sanders. "We just want to make sure everyone gets seen and taken care of."

At University of Tennessee Medical Center, emergency room leaders are changing staffing in anticipation of an estimated 10,000 more patients this year.

This comes against the backdrop of increasing ambulance turnaround times in Knox County. AMR, the county's ambulance provider, reports a 26 percent increase in ambulances waiting with patients at hospitals, compared to January 2018.

In other cases, hospitals have told AMR their emergency rooms are too crowded and to take patients somewhere else.

Tony Benton, Tennova's CEO, says the company communicated about its closure ahead of time and has not seen a substantial increase in wait times.

Benton also said the provider has changed so-called surge protocols that allow the company to bring in additional providers during backlogs.

Among those who say they have experienced a backlog since the hospital closed are 72 year-old Dorothy Meyrose and her daughter Sandra Williams.

They say they waited in a temporary room in early January at Tennova's North Knoxville Medical Center in Powell.

"There was people lined up in the hallways in the emergency room. On cots, on beds. There was just nowhere else to put people," Sandra Williams said.

She said they spent 24 hours waiting to be admitted upstairs and that hospital staff told them it was normal since Tennova closed Physicians Regional. 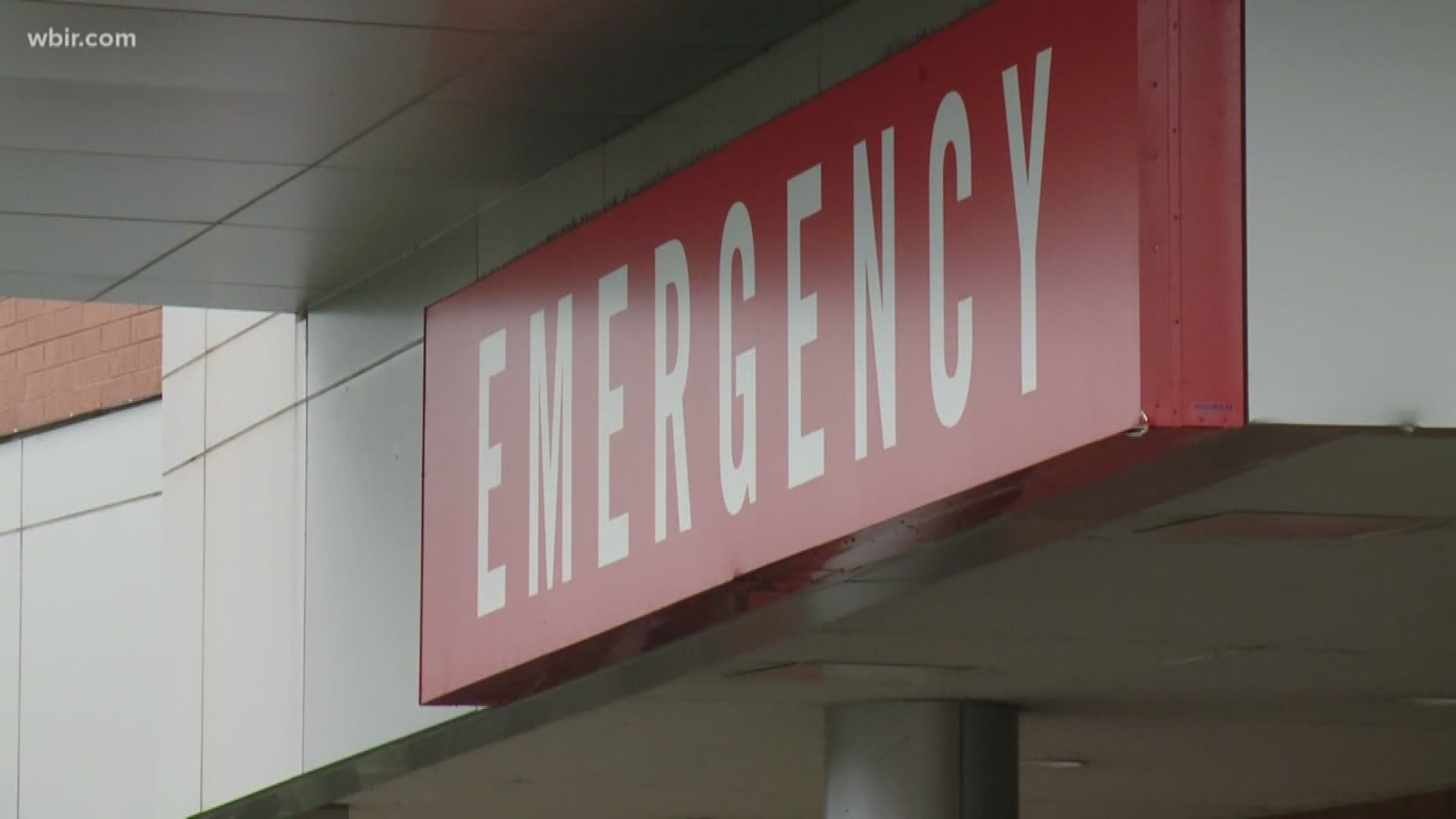 In 2017, there were 41,000 visits to the 30 treatment rooms in the emergency department at Physicians Regional.

Now the sliding doors through which those patients entered are fenced off, and a large sign reads "There is no medical staff at this location."

Tennova closed the hospital in late December after more than 88 years of operation.

Hospitals whose doors are still open have had to adapt to meet the demand created by the closure. At least one says it has seen wait times increase as a result.

He said wait times at Fort Sanders have increased since the hospital closed. In January, there were 218 more patients brought in by ambulance than the January before.

At UTMC, staff is preparing for a 12 percent increase in emergency patients this year.

"We don't think we've seen the full effect yet," Dr. Blaine Enderson, the hospital's vice president of emergency trauma and critical care, said at the beginning of February. "We've predicted that we'll see about 10,000 patients more this year than we did last year."

Tennova says it has not seen a "substantial increase" in emergency patients at its remaining two hospitals, in Powell and Turkey Creek.

Tony Benton, the CEO of Tennova, joined the company in April 2017. He oversaw the closure of Physicians Regional.

"We see peaks and valleys in volume all the time. So it's something we're always monitoring," Benton explained.

AMR, the company which holds Knox County's ambulance contract, said ambulances have had to wait, too.

In January, crews had to wait at emergency rooms for more than an hour 479 times--compared to 380 times in January 2018.

"They're often in the hall, with their patient being seen by a nurse and a doctor, just not getting a bed," Kah said.

The increasing wait times are a trend that predates the hospital closure, but AMR says the closing has made the problem worse.

Sometimes, hospitals tell AMR they're too crowded and to take patients somewhere else.

On the day Dorothy Meyrose and her family waited at Tennova's North Knoxville hospital, the emergency room there was so full that Tennova told the ambulance company it had no more room.

Benton said his Tennova hospitals have opened up space in their ERs to accommodate more patients during peak times.

The hospitals have also increased coordination between themselves and the ambulance company.

"We're supposedly in competition with each other, but we all have the same goal and that's to take care of the people of East Tennessee," said Enderson of UTMC.

Recently, the county temporarily changed its ambulance contract in an effort to reduce those wait times and allow crews to transfer patients and return to the streets faster.

Benton said Tennova communicated as far ahead of time as possible to let other hospitals know it was planning to close Physicians Regional.

"We began communication in October to share that," he said.

He said the company was working to manage peak volumes, including adding beds.

"I know all hospitals are doing the same things we do in trying to manage the throughput of patients, trying to reduce those length of stays," he said.

He said the closure has allowed the company to improve patient services at its other, newer facilities--and that Tennova has not examined closing other hospitals.

"We had to make a decision about Physicians Regional, and I know that was something that was really evaluated for years," he said. "There was a lot of specific reasons that facility was no longer appropriate for patient care."

The City of Knoxville plans to acquire the hospital site from Tennova and turn it into a new public safety complex.

As part of the sale, Tennova will receive $16 million in tax breaks to build on a new site on Middlebrook Pike.

Benton said the company has plans in the works for that site, but he would not share the plans or the timeline for releasing them.

With Physicians Regional closed, hospitals say they have made changes in patient treatment to manage the additional demand.

UTMC has adjusted staffing and re-opened areas of the emergency department, Enderson said. It is continuing to try to up its staffing to address the additional patients.

Fort Sanders has added a nurse practitioner to the triage part of the emergency process, so patients can begin receiving care faster.

"It has increased our volume and made it a little bit more difficult to get people back in the time we’d like to," Kah of Fort Sanders said.

The hospital also is expanding. It's in the midst of a multi-year project that would add beds to its emergency and critical care departments.

But the first stage of that expansion won't open until at least 2020, Kah said. Meaning temporary measures will have to stay for now.

Dorothy Meyrose and her family say they received excellent care despite the circumstances from the staff at Tennova North, but they say the scene they witnessed in January should not happen.

"It was crazy, I had never seen anything like that," daughter Sandra said. "I think we need to get another hospital. Do something. Because evidently the hospitals we have are not enough."