Student inventors and entrepreneurs at L&N STEM Academy are hoping to have their business ideas funded through a new 'Shark Tank' style competition at the school. 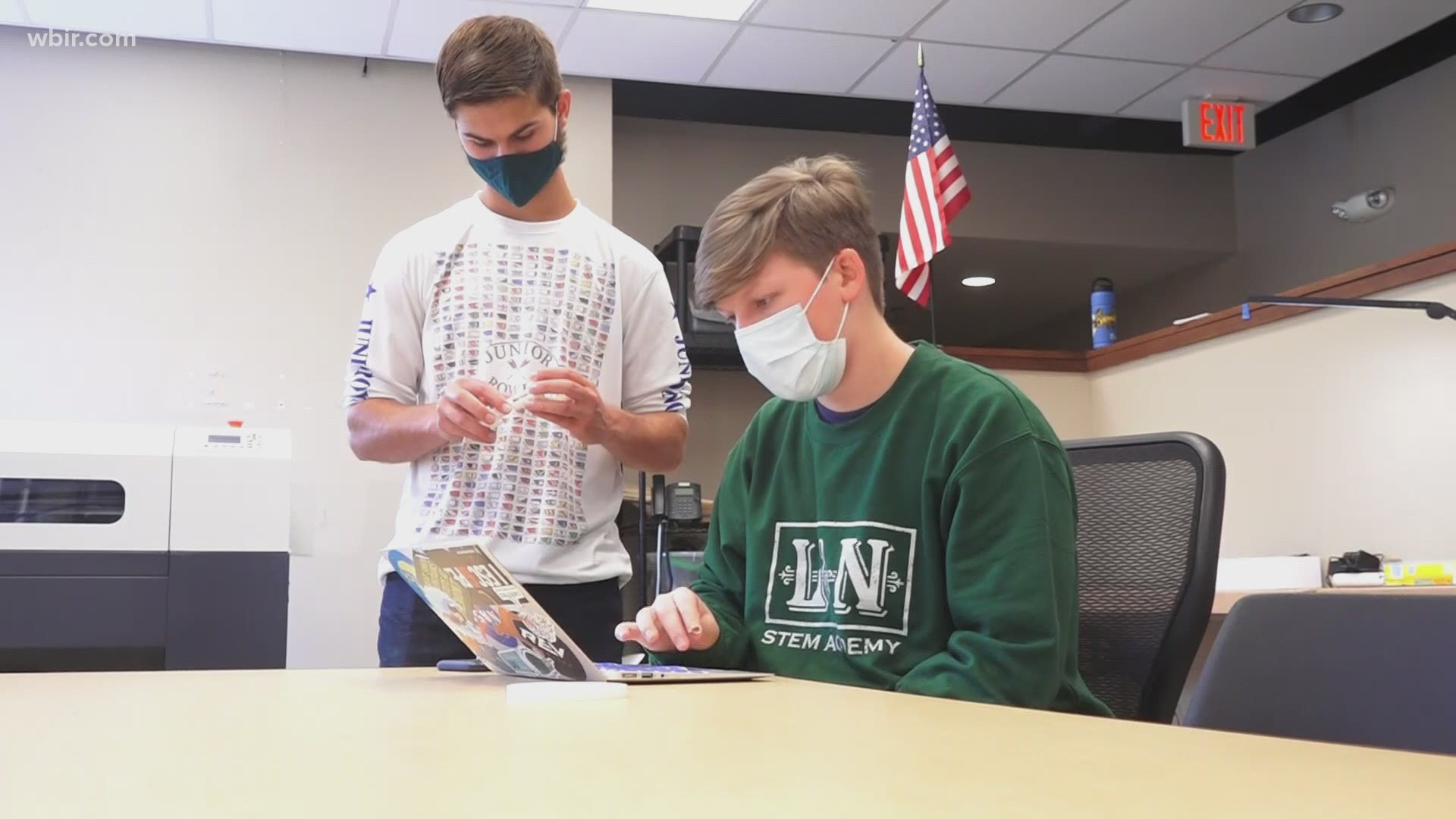 KNOXVILLE, Tenn. — A new maker space at L&N STEM Academy is giving students everything they need to design, invent and create. Those with the best prototypes have the chance to start their own business while they are still in high school.

The room of tables and toys down a hallway in the school's second building is a dream come true for students — called "The Depot."

Over the last 4 years, senior J.P. Enkema watched the space shift from a regular classroom to a room with 3D-printers limited to students taking design classes, followed by a shift to space for the robotics team.

"Finally we've had this awesome opportunity to have a maker space here and actually have it accessible to everyone," he said.

The maker space has basic woodshop tools and other crafting items you don't need to be a high-school genius to know how to use — drills, screwdrivers and hammers.

But there are also two 3D printers, a laser printer and spaces for working on small computer parts without damaging them.

Other schools have maker labs like this, L&N STEM Academy is not the only one.

The difference is that this one isn't just for classwork.

"I don't care if it's a 'school idea.' It's to get their mind working and to give them an opportunity to do something outside of this, something that might make them money someday," said L&N Principal Jimm Allen.

Some of these kids will be making money off their designs as soon as this spring.

That's thanks to the $20,000 grant Allen secured through the Knox Education Foundation.

"It choked me up because I know what these kids are going to be able to do now, which they weren't able to do before," said Allen.

That money funded the maker lab as well as a competition. Students come up with an idea for a project they want to work on and educators review it. They discuss the idea with students before they pitch it in a "Shark Tank" style presentation.

The five winners will each receive $250 toward their project.

"We'll pair them with a business partner and be able to fund the things that they need for their prototype," said Allen.

One of the entrants is junior Jackson Moody. His prototype is Jarvis — a robot.

"Hi I'm Jarvis, a robotic companion built to interact with users and be there when other people can't," the complex technology said in a video.

Jackson and Jarvis came in second place in the Knox County Science Fair, and are competing this week at the International Science Fair.

The idea is similar to popular assistant technologies like Alexa or Siri, but with more emotion.

"Jarvis has a camera so he can see your facial expressions," said Jackson. "He has a classifier so that Jarvis knows your emotion and how to respond to that."

His idea came after seeing more people anxious and alone during the pandemic. He said he's also working on an accompanying app that would allow healthcare providers to see Jarvis' tracking and impact on mental health.

He wants to build a second prototype to send to his grandma so she can test it out.

He's hoping funding from the "Shark Tank" competition can take his prototype to the next level.

Jackson will use the tools in the maker space to make it happen.

"My favorite thing is to sit and watch their minds work," said Allen. "I want them to be able to think and try and do anything and think that anything they want to try to do as possible."

Several area businesses plan to work with the students to make their prototype ideas real businesses and products.

If you or your business would like to work with L&N STEM Academy students on their designs, you can contact the school at (865) 329-8440.