The governor stopped short of saying if he would consider mandating masks in public statewide, but said he is checking into giving local leaders the authority. 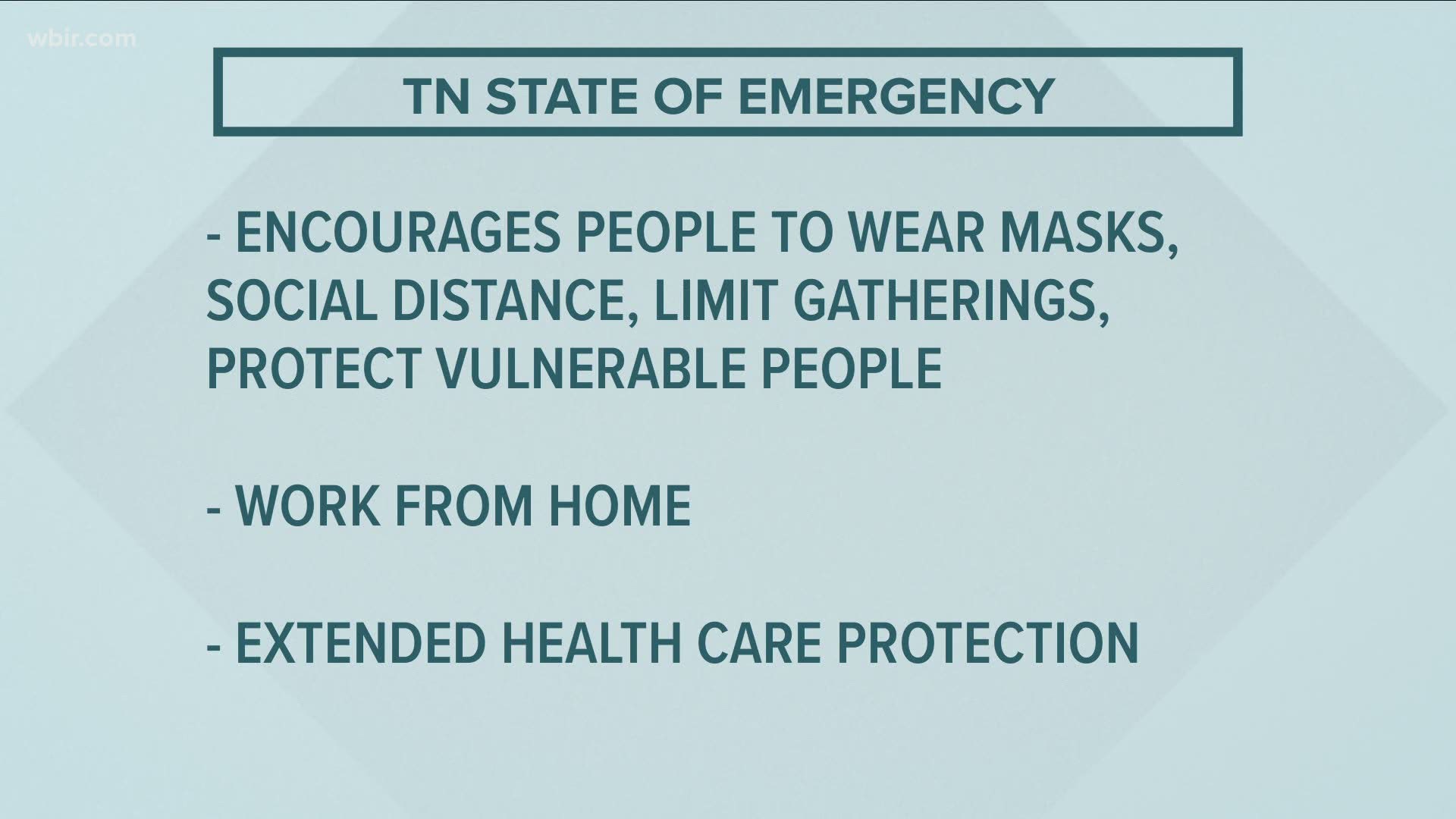 NASHVILLE, Tenn. — Governor Bill Lee is not ruling out the possibility of allowing more local leaders in Tennessee to mandate the use of face masks out in public, saying the state is growing increasingly concerned with the continued rise in COVID-19 cases and hospitalizations in recent weeks.

Lee and Tennessee Department of Health Director Dr. Lisa Piercey took a notably more assertive tone during Wednesday's weekly state briefing, more so than any other time since the start of the COVID-19 pandemic, pleading multiple times for Tennesseans to keep their guard up and to follow social distancing guidelines.

"Don't put our state two steps backward by refusing to wear a mask, refusing to social distance, or refuse to pay attention to something as simple as washing your hands," Lee said.

The state has taken a primarily hands-off approach to reopening that relies on personal responsibility after active cases had formerly plateaued in mid-April. While the reopening guidelines remain the same, the process is no longer moving forward in light of the recent resurgence of new and active cases across the state, with the governor highlighting drastic rises in Knox and Sevier counties. Lee had to extend his previous reopening executive order out until late August.

Credit: WBIR
Active cases continue to rise at a significant rate in Tennessee.

Wednesday's briefing made it clear the state is considering other tactics should the case counts and hospitalizations continue to rise, with Gov. Lee specifically mentioning he is looking into the possibility of allowing local leaders to issue mask mandates as Nashville's mayor did this week.

The governor stopped short of saying if he would consider mandating wearing masks in public statewide, but said he is checking into giving local leaders the authority to make that decision should they feel it's necessary with rising case counts.

"Mask mandates are something that’s a hot topic. Face coverings are one of the more effective tools we have in this fight, but local governments and other areas are looking for ways to create stronger expectations -- and we’re exploring ways to make this possible. We’ll have a resolution on that question very soon," he said.

Dr. Piercey said at least half of all cases continue to be contracted from unknown sources, meaning most people are likely catching the virus while out in public from strangers  -- which increases the risk of spreading it to family members, as well. Large gatherings in bars and other hangout spots were specifically mentioned, and health leaders in Knox County have said similarly their contact tracing has shown many of the cases to be largely due to people gathering in close contact in places like bars and restaurants without masks.

Piercey said people should not mistake the phased reopening as a "return to normal" by disregarding the guidance they have repeated for months.

"Please listen carefully: This is not the time to get back to normal. We are all experiencing what we call quarantine fatigue, but I can guarantee you the virus is not getting tired," she said. “Masks are one of the single most effective tools we have to combat the spread of virus. We can halt and reverse the trend of COVID-19 before it becomes dire."

Piercey said the recent record rises in cases isn't just because of increased testing -- saying the rise is too substantial in comparison and a corresponding rise in hospitalizations in Knoxville, Memphis, Nashville and elsewhere in the state has followed.

In the Knox County/East Tennessee region, the number of hospitalized coronavirus patients across the area on June 18 was 12. That number has grown to more than four times larger to 51 as of June 30, with ICU and ventilator usage at their highest levels locally since the start of the pandemic.

Piercey said hospital resources in the state remain stable and able to respond to medical needs, but said they are closely monitoring that in case more COVID-19 hospitalizations begin to overwhelm the system.

"We should be very concerned," Lee said. "When we have people dying in this state as a result of this virus, we should be taking personal responsibility for this. What I think we need to remember is that we have mitigated this before with behavior, and we can mitigate it again with behavior."