This year, the race will start and finish in World's Fair Park. 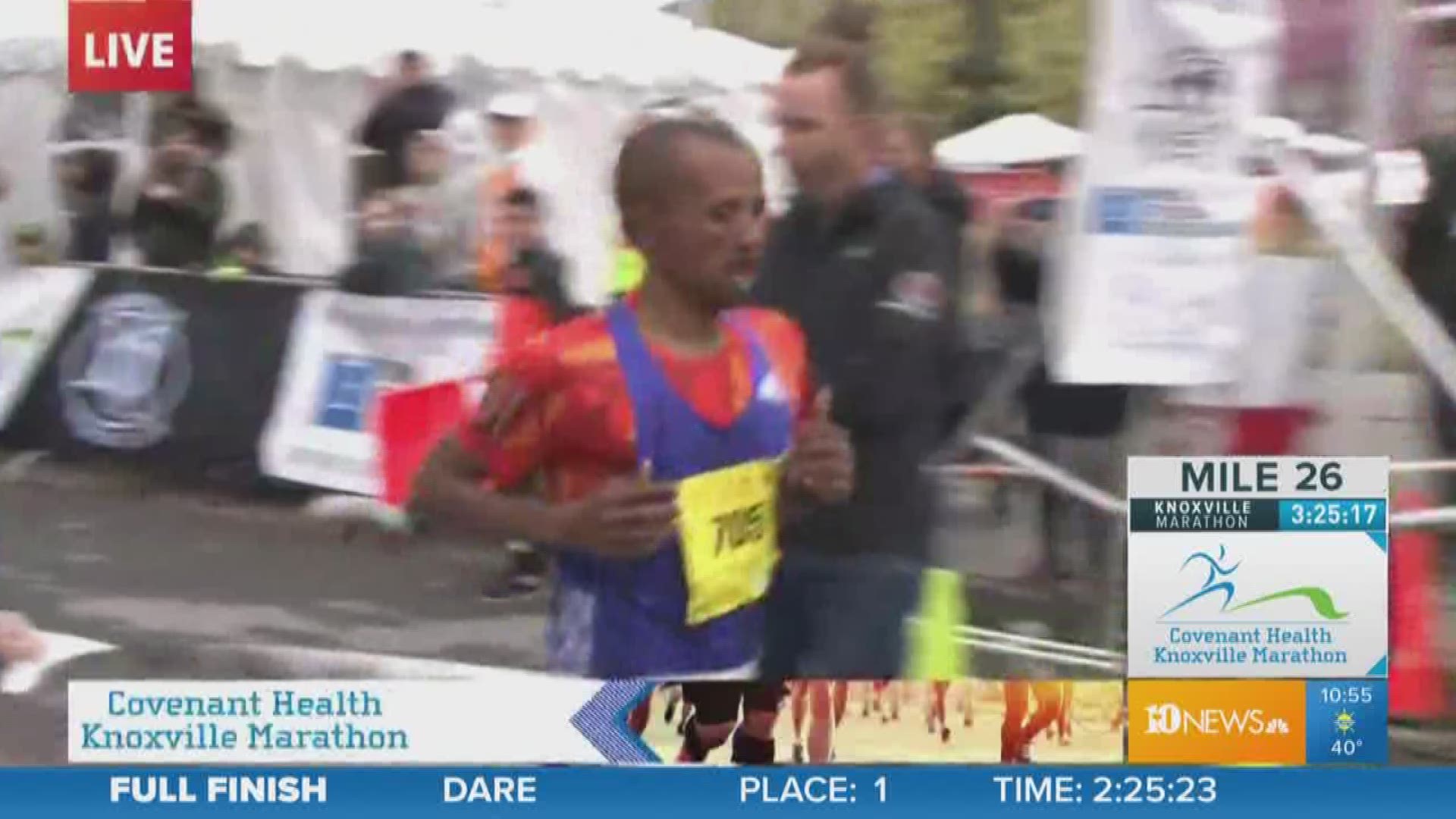 KNOXVILLE, Tenn. — Runners in the 2019 Covenant Health Knoxville Marathon will finish at a brand new finish line this year.

Marathon weekends is set for March 30-31, with the 5K and Covenant Kids Run on Saturday and the marathon and half-marathon on Sunday.

This year, the race will start and finish in World's Fair Park. It previously finished on the 50-yard line of Neyland Stadium, but that changed this year because UT was expecting Neyland Stadium to be in the midst of renovations, though that has since been postponed.

“Most of the changes affect the second half of the marathon route, but we still visit all the scenic, iconic Knoxville neighborhoods that make this race special. Of course, all races this year will enjoy a new finish line in World’s Fair Park with a festive after party on the lawn with music, food trucks, beer and more," Covenant Health Knoxville Marathon Race Director Jason Altman said.

On course, there will be plenty of portable toilets.

They will be near (but not right next to) every water station.

At each station, organizers will have flags to alert runners of weather and other conditions. A green flag means good, yellow is less than ideal, red means potentially dangerous, and black means the event is canceled because of dangerous conditions. 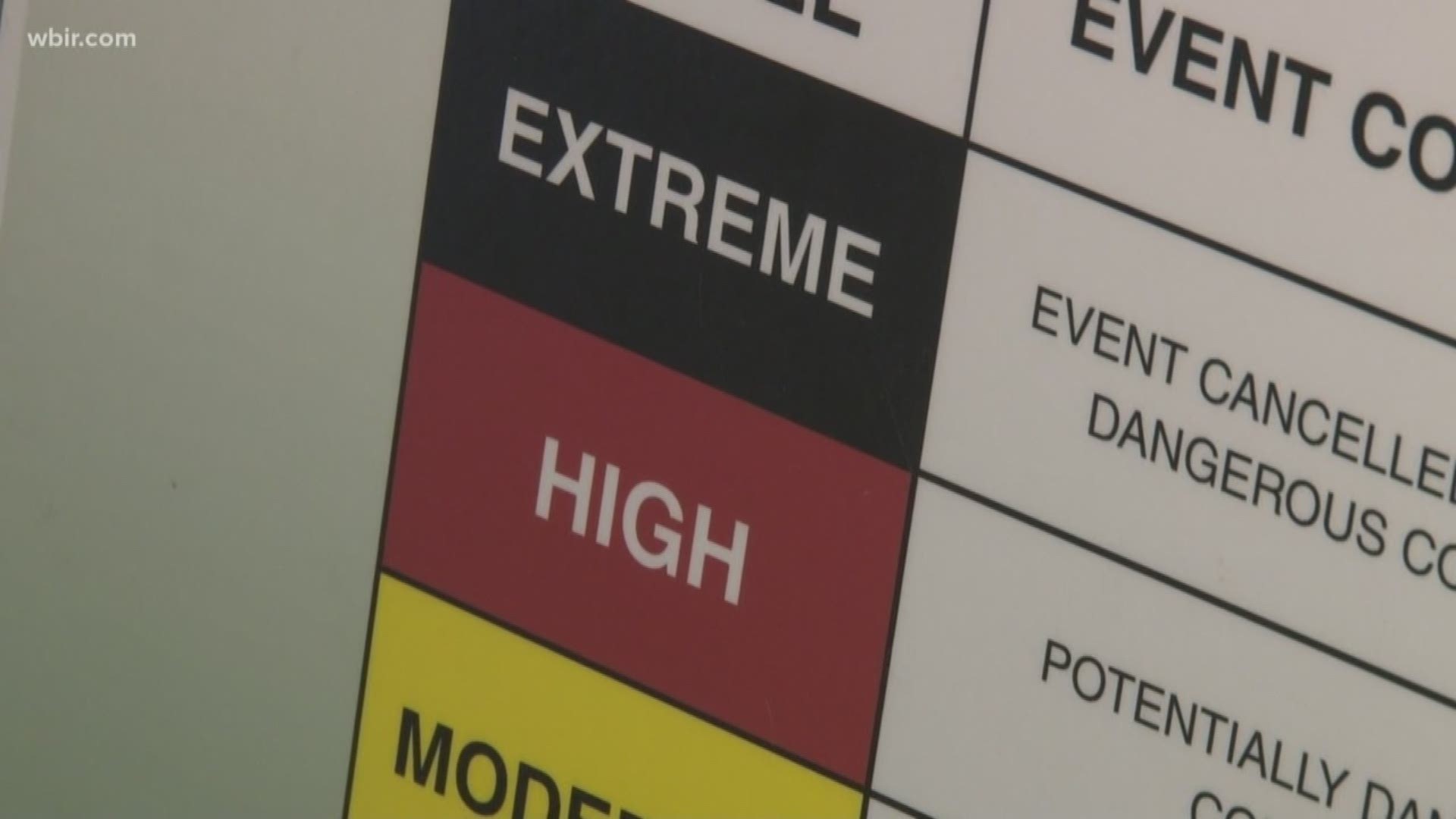 If you're wondering how to dress -- be sure to check the forecast the night before! Fun costumes aside, a chilly morning will mean lots of people dressing in layers.

It also means lots of layers being shed during the race as runners heat up! You can shed an item along the course at any time, but if someone's not there to come and claim it for you before the race ends -- don't expect to find it waiting for you.

Shed clothes left along the most of the marathon route are collected and donated to KARM.

Something new this year, though, is that you can shed clothes around the first mile at Thompson-Boling Arena and have Runners Market hold onto it for you for a week.

Runners, on your marks!

The day before the marathon, participants will need to check in at the Covenant Health Knoxville Marathon Health and Fitness Expo to receive their bib, timing chip, t-shirt, and goody bag. There is NO Sunday pickup.

The expo runs from 9 a.m. to 8 p.m. Saturday, March 30 at the World's Fair Exhibition Hall at 935 World's Fair Park Drive in Knoxville.

The expo is much more than just a check-in. There will be  exhibitors of running and fitness apparel, and a variety of products and services for fitness, sports and nutrition.

This year -- Marine Corps veteran Rob Jones will be the featured speaker at 3 p.m. inside the exhibition hall. Jones was wounded in Afghanistan, resulting in a left knee dis-articulation and a right above-knee amputation of his legs. Since then, he has worked to help fellow wounded veterans and completed a number of milestones -- including in 2017 completing a goal of running 31 marathons in 31 cities in 31 days to raise more than $200,000 for the Coalition to Salute America's Heroes.

The Clinch Avenue Viaduct serves as the start for all races and will be closed to traffic starting at 2 p.m. Saturday until 2:30 p.m. Sunday. Parking will be prohibited on Clinch Avenue between 11th and 16th streets, and vehicles parked on the street will be towed Saturday evening.

The 5K starts at 7 p.m. on Saturday with closures at Clinch Avenue between World’s Fair Park and 16th Street, portions of Volunteer Boulevard, Peyton Manning Pass, Phillip Fulmer Way and James Agee Street until about 8:30 p.m.

Wondering about a specific road we didn't mention? Click here.

Not running? No worries.

If you don't want to run, remember you can still be part of the marathon experience by cheering the runners on along the route.  WBIR will also televise the entire marathon on race day.

Dave Landeo & The Sol Beats will perform on the stage. Dave and Knoxville musicians Joe Thompson (sax), Michael Hulsey (trumpet), Vic Ilagan (drums) & Vince Ilagan (bass) will be performing on stage at the Festival Lawn at the World’s Fair Park from 9 a.m. to 1 p.m. Sunday.

The band performs a mixture of dance tunes, high energy rock, and soul-pop covers and originals. It’ll be a big after-race celebration for all the runners, family & friends. Free and open to the public.

At this year’s event, Calhoun’s Restaurant will be serving up beer from their world famous microbrewery, Smoky Mountain Brewery. They will serve beer on Saturday after the 5K (7 p.m. – 9:30 p.m.) and again on Sunday (10 a.m. – 3 p.m.). Each registered participant, 21 and older, will receive a ticket for one complimentary beer. Calhoun’s will also be selling beer for family members, spectators, or participants wanting a second beer. Participants under the age of 21 will not receive a beer ticket.

Food Trucks will be out on both Saturday, March 30, and Sunday, March 31, including three of Knoxville’s favorites – Forks on the Road, Penne For Your Thoughts, and CJ’s Tacos. They’ll be selling food to spectators, family members, or participants who are looking for more than the provided post-race food that comes with your entry.